Blueshirt Banter goes one on one with Wayne Gretzky

Share All sharing options for: Blueshirt Banter goes one on one with Wayne Gretzky

As you may know, this past Wednesday I attended the EASports-Gillette Champions of Gaming 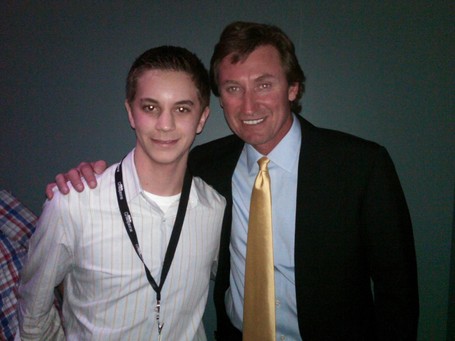 event in New York City, where I would interview the one and only Wayne Gretzky for Blueshirt Banter. To give you a brief rundown of the event, it basically saw the best sports gamers from around the world compete in one place for the championship. If they won that championship, they would move on to play an athlete in the game, depending on what sport game they were champion in. For example, if you were the NHL champion, you would take on Wayne.

Anyway, I spent my time in the media lounge, which was quite an experience. Sure I have been near athletes before, attending sporting events and what not, but something about being up close and personal with these guys as a member of the media was very special. When I was walking in, Yankees shortstop Derek Jeter was being escorted in right in front of me. When I made my way through bouncers and security, I reached the media lounge where NFL star Matt Ryan was being interviewed on television and a ton of media outlets were running around. This was the first time in my life that I was experiencing something like this.

After waiting for a bit and trying to soak it all in while I could, my time to interview "The Great One" came. In fact, he walked up to me and obviously did not have to introduce himself. Wayne and I were then brought to a private room where the interview was held.  Just me, him, and a few observers. From there, I began the Q and A, which can be read below.

NM: Do you ever want to return to coaching in the National Hockey League?

WG: You know what, I don't think about it. Really just because I am enjoying my life right now. I think it is the greatest game in the world and I love the NHL, and right now I am having fun just watching it as a fan. At this point in time, I have not really thought about it, no.

WG: That's hard for me because truth of the matter is I have only seen each of those guys play probably one time. It would not be fair for me to comment other than say that from everybody that I have talked to, both kids are going to be really good players and will be good acquisitions in the National Hockey League, and will have great careers. If I saw them, I would tell you, but I really haven't seen them play.

NM: During your career, was there any specific goaltender that had your number and would give you fits to play against?

WG: There are a lot of good goalies. I always look back at guys like Pelle Linbergh, Ron Hextall, and I always thought that Billy Smith was the best big game goalie who ever played. Then along came guys like Patrick Roy and Marty Brodeur. We've had a lot of great goaltenders who have stopped me a great number of times, but the challenge to go against them was always fun.

Continue reading the interview after the jump.

NM: If you could pick any player that has ever laced up the skates to captain a team that you coached, who would that player be and why?

WG: Well it's pretty simple. You pick number eleven [Mark Messier] because first of all he was a great captain and a wonderful player, and he was a six-time champion. I think that's a pretty easy choice. I think even you can make that choice [laughing].

NM: Hockey players have always been known as pranksters on and off the ice. Would you consider yourself one of those pranksters?

WG: The way it works is, if you don't bother anybody, they won't bother you. I didn't have enough energy getting ready for a game to do stuff like that. I just got ready for practice and for games.

NM: Earlier today, it was reported that Jerry Reinsdorf, the owner of both the Chicago Bulls and Chicago White Sox, had his proposed arena lease for the Phoenix Coyotes approved by the Glendale City Council. Now all Reinsdorf has to do is come to an agreement with the NHL, who bought the team in bankruptcy court last year. Since you were previously a part of the Coyotes organization as head coach, I wanted to know what your take on this was.

WG: I think it's great. Phoenix is a wonderful city and Jerry Reinsdorf has had great success with the Bulls and the White Sox. He lives in Phoenix for half the year and I think he is going to be a great owner for that city, and it is exciting news for the entire sport.

NM: My last question is who is your prediction for the Stanley Cup Champion this year?

WG: You never go against the defending champions, so if somebody knocks out Pittsburgh, watch out.

The last time I met Gretzky before this was probably when I was around the age of four. At the time, I knew who he was, but not like I know now. This time around, being able to stand face to face with the greatest hockey player to ever live, an ambassador of the sport, and an icon in general was truly breathtaking. He was nice, he was funny, and just an all around great guy. He treated me as if we were friends that meet up once a month just to talk.

At the conclusion of the interview, I was just about to ask Wayne for a quick picture to remember this by, but before I could ask, he asked me. That is when the picture you see at the top of this story was taken, but I won't have to look at the picture ever again if I don't want to, simply because that moment, that feeling, that sense of pride is burned into both my heart and my mind forever. That is why I decided to take you through my experience, step by step, instead of just posting up the interview. I wanted you to feel like you were in the moment with me. It is something that I will never forget.

Lastly, I just want to personally thank Jim Schmiedeberg, the man that makes Blueshirt Banter work, as he is the one that coordinated all this and set it up. All I had to do is accept. This was not only a hockey experience, but a personal one, and I appreciate all of the people that worked at the event who also made this happen.  And of course, a big thanks to Wayne Gretzky.