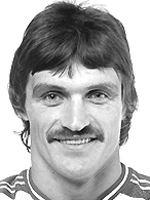 Frank Beaton is about is as old school tough as it gets.  Former Ranger GM Fred Shero brought him in over 30 years ago in to add toughness to a Blueshirt team that had only one tough guy and that was Staten Island’s own Nick Fotiu.

Frank was a player who was not only tough but  stood up for teammates. Frank came to Broadway with an impressive brawling resume from both the IHL and WHA with a plethora of penalty minutes and even more impressive than that, a fighter's reputation. He played 25 games for The Rangers between 1978-1980 and that was it, his entire NHL career.

You think his name would be a blip on the Ranger fan radar screen. But fans remember the Ranger tough guys back then, because frankly their were so few of them.

I should also mention there's another reason Frank still remains memorable to older Ranger fans today, is because he came to the Rangers with not one but two nicknames, Frank "Seldom" Beaton and Frank "Beater" Beaton.

He wasn’t a big guy but he was fearless. He fought everyone on the ice to make it to the National league and sometimes even off the ice.

Frank will be joining us as our guest on Blueshirt Banter Radio tonight at 8 PM to talk a bit about his days as a professional ice hockey tough guy but the main reason we invited him on is to talk about something very tragic that very recently has impacted his personal life.

Frank Beaton’s cousin, Jon who lived in Antigonish, Nova Scotia, Canada was out celebrating with his friends on New Years Eve 2010 when he was murdered at the hands of a gutless coward.

The cowards name was and still is Robert "Bubba" Lamb.

Lamb stabbed to death  a young, vibrant and fun-loving unarmed Jon Beaton, and  ran, like all cowards do and still remains a fugitive from the law today.

We will be talking to Frank tonight about his family tragedy and try in anyway to get the message out there and  help the Beaton family in anyway through our show and fans to get this murderer caught and brought to justice.


You can join us live in the Blueshirt Banter Chatroom to text it up with other Ranger fans while the show streams live or ring us up, as we will be taking your phone calls for the entire two hours at  (646) 478-4692

Just Click The Player below to hear the broadcast. :