Our buddy Kyle from Katchop has checked in with a new logo for the Pittsburgh Penguins, entitled "ChokesBurgh" , I 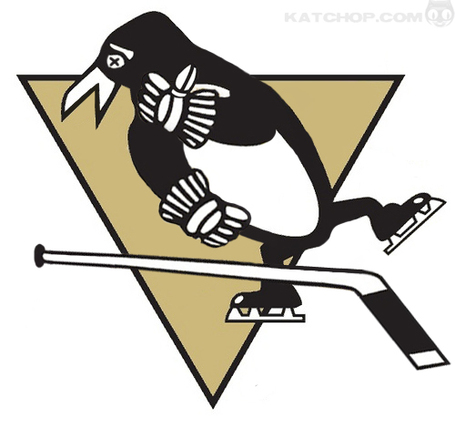 thought you guys might get a kick out of it, even if NBC and the NHL don't. Kyle has come up with some great pictures that you can see on his website, and he occasionally shares them with us. Thanks Kyle!

The Conference Finals kick off today, and as an old school hockey fan, I am rooting Original Six all the way. Montreal and Chicago have met four times in the Stanley Cup Finals, the last time being 1973. I'm predicting it will happen a fifth time:

Finally, if you think this year's Ranger defense had some lapses, then you need to see Eddie's new video on Ranger Crisis, a mistake filled victory over the Winnipeg Jets. Remember, Ranger Crisis is the only place on the internet where you can see vintage Ranger videos, Eddie has a Smithsonian-worthy collection of Ranger video locked away in a secret location, and does a great job of presenting these like only he can. Make sure you check it out: