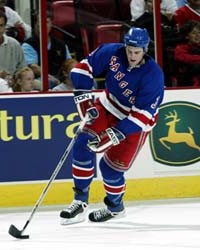 As the 2002 trade deadline approached, the Rangers were on the outside of the playoff picture, and desperate to find a way to get themselves to the post season. This Rangers team was deeply flawed, and outside of the FLY Line (Theo Fleury, Eric Lindros, Mike York) and Brian Leetch, there wasn’t much to be happy about with this squad. Brian Leetch was getting older, and the next best defenseman on the team was Vladimir Malakhov. The Rangers needed defensive help, and fast. In their haste, they traded a young and promising forward in Mike York and a fourth round pick (Ivan Koltsov) to Edmonton for young and promising defenseman Tom Poti and Rem Murray. When the trade was made, Rangers fans, who had grown attached to York as the first legitimate home grown scoring forward since Tony Amonte, almost mutinied.

York was coming off three good seasons in New York, where he put together a line of 58-80-138 in 230 games. He was flourishing on the FLY line, and was an exciting player to watch grow in Ranger blue. Poti, at the time of the acquisition, was in the middle of a bad year offensively, scoring just 2 goals and 25 points in the 2001-2002 season. The season prior, Poti put together a career year, with 12 goals, 20 assists and 32 points for the Oilers. Although Poti was struggling, Ranger fans were sold on the idea that Poti could become the next Brian Leetch, who’s skills were starting to fade as he got older.

Things did not get much better for Poti after the lockout, as his final season with the Rangers would be marred with an under-appreciation of what Poti brought to the table. He did not produce the offensive numbers that we were promised when comparisons to Leetch were made, but he did play solid defense, and was one of the Rangers better defensive defensemen and shot blockers. In fact, Tom Poti was the team leader in shots blocked in the 2005-2006 season.

Poti then went to the Islanders for a year in 2006-2007, ironically enough the same year that York played for the Islanders (more on that below), and had the second-best year of his career, netting 44 points (6-38-44). He parlayed that into a four-year deal with Washington, where he would be a blue line mainstay for a team that grew from lottery-picks to Eastern Conference powerhouse. His role on the team was simple: provide steady defense. He excelled in that role for Washington.

As for York, he continued to produce at a 50-point clip per season for the next two seasons with the Oilers, and one more with the Islanders. In 2006-2007, York’s game disappeared, as he bounced from the Islanders to the Flyers to the Coyotes to the Blue Jackets, netting just 16 goals over the course of three seasons. York now resides on the Rochester Americans of the AHL. During his time with the Rangers, York never crossed the 30-goal, or 60-point thresholds.

At the time this deal was made, the Rangers acquired a young defenseman with a solid reputation entering his prime. To acquire such a player, something has to give, and York, a young forward who had two 50-point seasons under his belt, was that price. It is very easy to analyze deals in retrospect, but there is no denying that Poti was the better player than York. Their career paths following the trade reflect this. In a younger, faster NHL with more room to skate, York could not compete. (Before you go and call me a York hater, you should know that I was one of the many that hated this trade when it was made. I absolutely loved York, and was devastated when he was dealt.)

This trade was a case of the Rangers trying to address a problem on the blue line. Glen Sather acquired a defenseman entering his prime who he had drafted. York was the cost of doing business. Very few Ranger fans liked the deal at the time of the trade, and even fewer like the trade now. But in the end, Poti turned out to be the better NHL player.