Live From Chicago: Blackhawks take Game One in a Wild Outing, 6-5

Share All sharing options for: Live From Chicago: Blackhawks take Game One in a Wild Outing, 6-5 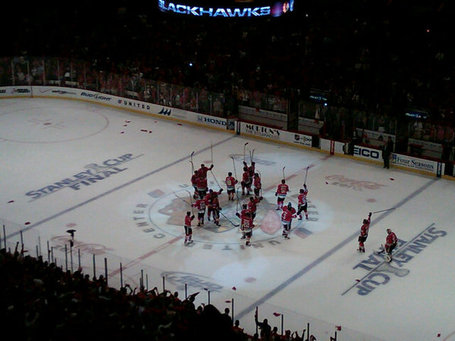 So I guess I wasn't lying when I said that fans a) would be in for a treat with this year's Stanley Cup Final match-up and b) did not know what to expect. From a coach's standpoint, I am sure a tighter, lower scoring game would have been much more pleasing, but for us spectators, tonight's back-and-forth action provided for spectacular entertainment, especially for those who were fortunate enough to witness it live like myself. My goal here is to not only recap game one's action, but to walk you through the night as if you were in attendance, because let me tell you, something like this is not an everyday experience; it is something special.

The night began with one of the more breathtaking National Anthem performances I have ever seen. It was not the singer who was amazing though, it was the crowd, who would just not stop screaming for the entire minute or so. Then, to start the game, the Hawks seemed to be a little cautious while the Flyers came right out and attacked. Ville Leino was credited for the first goal of the contest at 6:38 of the first period, which bounced off Niemi's shoulder and into the net. Chicago, like they seemed to do all night long, had an answer. It was Troy Brouwer's slapper from the point that beat Michael Leighton and sent the United Center faithful to their feet. To put the reaction into perspective, just take a Madison Square Garden goal celebration, and times it by five.

Dave Bolland would later score shorthanded on the breakaway to give the Hawks a 2-1 edge, but that would not last very long with both Briere and Hartnell notching goals in the final four minutes of the first stanza. So after one, Philadelphia led 3-2. During that intermission, I sensed some nerves coming from the fans with their boys down by one, but I knew all they needed were shots since Leighton had been struggling majorly.

Continue reading after the jump.

1:11 into the second, Patrick Sharp did not waste his 3-on-1 opportunity as he lasered a wrister over Leighton and now it was tied, once again. However former Ranger Blair Betts replied six minutes later with a shot that went off the post and in to regain the lead for Philly.

As I suggested above, the Hawks began shooting and back-to-back goals by Versteeg and Brouwer (second of the game) gave the home team a 5-4 advantage and would chase Leighton from the goal. Leighton was replaced by Brian Boucher, who just returned from injury today. To start, he held his own but was struggling to hold onto the puck. This gave Philly the opportunity to tie things up yet again, as this time it was beautiful puck movement by the Broadstreet Bullies that led to an Aaron Asham tally.

Tomas Kopecky was the hero for the Blackhawks, somehow threading the needle with a difficult goal from a sharp angle midway through the third period. Some noteworthy goaltending by Niemi and improved defensive play allowed the Hawks to preserve the lead and ride it to the final buzzer.

It is hard to figure out an exact turning point in this game, but I would have to say it was when coach Laviolette decided to yank Leighton and replace him with Boucher. Oddly enough, I thought Boucher played well, but for some reason the change gave the Hawks more of a spark than it did the Flyers.

Wrapping up here, I thought the United Center was a fantastic arena that holds some dedicated fans. I felt like they were a lot like Ranger fans in that they are very hard on their club when they make a mistake or suddenly trail in the game. Also, I have never been to a hockey game with the noise levels so extreme. That started during the introduction videos, before the teams even hit the ice.