Share All sharing options for: Glen Sather and his sub .500 Winning Percentage

One of my favorite NHL blogs is Hockey or Die, which is manned by Jonathan Willis, who also covers the Western Canadian NHL teams along with a helping hand at Copper & Blue (the Oilers SB Nation site).  Willis tackles a lot of the current hot-topic issues with a fair and (my favorite) statistical view of things. He also keeps an eye on other media and the business of the NHL, which I also enjoy. When I visited his site last night, I had to do a quick writeup on his latest post, "NHL General Mangers: Records with Current Teams."

The Fire Sather cries have never been louder than this past season, and this just adds more fuel if you ask me. I personally don't now if Mr. James Dolan is a big numbers guy like I am, but I would like to think he could understand something as simple as "winning percentage." The chart below (put together by Willis) shows all 30 teams GM's and their winning percentage with their current teams. It's not to difficult to find Sather, who has a big all-time record to couple his sub-par winning percentage. 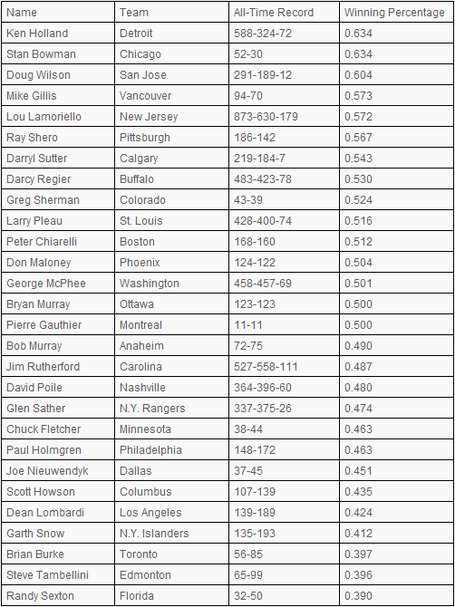 I really don't have much more to add as everything has been said plenty of times before about Sather and the job he has done. Seeing that the past is in the past, I am curious to see the moves he makes this summer. Essentially, he can play it safe and use our farm system for a youth movement, which would please many and would indicate that maybe he has been listening to the outside world.  But, at the same time, if he goes out and creates more cap issues, I wouldn't be shocked in the least.