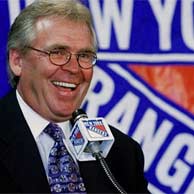 This past Tuesday marked GM Glen Sather's ten-year anniversary of being the president and general manager of the New York Rangers. We have established here on the blog that he is not going anywhere between now and the next season despite false rumors and fan rallies outside Madison Square Garden. This is the first season in which the Blueshirts have not been playing hockey beyond the regular season since the lockout, and that alone is not going to cost Glen his job. However, back-to-back seasons of overall failure may get the attention of ownership, who at some point will become fed up with mediocrity or less.

The Blueshirts mastery of just barely sneaking into the playoffs year in and year out has hid many of the faults of this organization and the team itself. Essentially, it is the reason Glen Sather remains the head of the front office. Once making the postseason, though, the Rangers have only come out victors in two playoff series since Sather has been GM. Both of those series wins came in the first round which eventually led up to their downfall in the semifinals.

Since the magical run in 1994 and some scattered success after that with Gretzky and others occupying roster spots, the city of New York has not been able to experience the Conference Finals in an entire decade, let alone the Stanley Cup Finals. When you are a big market team and have a history like that, most often changes are made to management. I mean, c'mon even the Toronto Maple Leafs figured that one out by hiring Brian Burke and Ron Wilson to take over the reigns up North.

Continue reading after the jump.

An entire decade and all Sather can brag about as far as his career in New York goes is two measly playoff series wins. There is not much else to his name in the Big Apple. He traded away a legend in Brian Leetch, he tried going in multiple directions with this team and just repeatedly failed, and now he has run out of options and is taking whatever leftover scraps from other teams that he can find. And not only has he done that, but he has handed those players all-star salaries to do, well, close to nothing.

Just take players like Wade Redden, Chris Drury, Scott Gomez, Donald Brashear and Ales Kotalik. Granted he got himself out of two of those contracts, but two of them still remain and are coming back to bite him down the road. Don't forget Michal Rozsival, who was re-signed at $5 million when he was probably worth around three million, if that.

At least in the "Dark Years" as they are termed by the Ranger faithful, Glen was reeling in marquee names such as Eric Lindros and Pavel Bure. Although they were washed up by then, there was still some sense of direction as far as what he was trying to do. Following that, it was the European era with Jaromir Jagr, Martin Straka and Michael Nylander leading the offense. Now, what is his aim? What direction is he moving in? We have seen so man attempted rebuilds fail so what should make us believe that the one they are currently in the middle of is going to be any better?

I will admit that the Rangers do have a great farm system and group of prospects approaching their time to make the jump to the National Hockey League. Those players are knocking on the Rangers' door, but many of them do not have room to make the move because of already occupied roster space that is currently held by dead wight contracts belonging to lack luster players. Plus, I give a lot of credit to Gordie Clark, the head scout for the Rangers, for bringing these young stars into the system, not Glen Sather.

So when you look at the big picture, view the rosters over the past ten years since Sather has been in office, and look at the patterns, it just seems all too believable that the cycle is starting all over again. With the ice back to being melted in April, Sather is going to attempt to speed up yet another rebuild by acquiring useless free agents that will get this team nowhere.

If the right players are brought in, new prospects are introduced to the NHL squad, and this team somehow manages to get back on the playoff track, then that is great. But if Sather is again spending the regular season trying to patch holes he made in the roster during the offseason, his job will quickly be on the brink of coming to an abrupt end. Of course, there is a while until his fate will be determined based on the 2010-11 season, but if the cycle continues as planned, we will soon realize how far this team will go just based on the changes, or lack thereof, made this summer.