Share All sharing options for: Blueshirts by the Numbers: Number 7 - Rod Gilbert 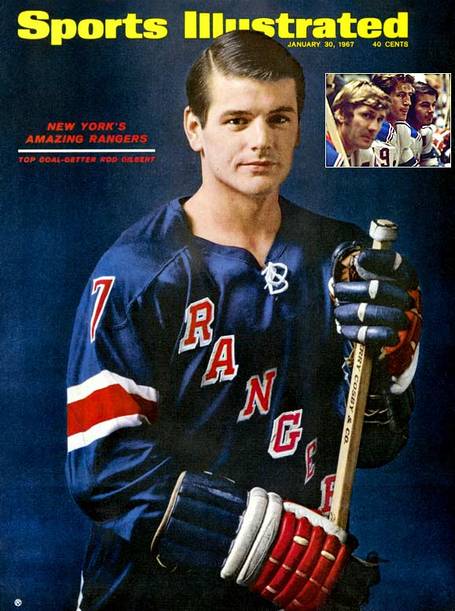 number seven we take a look at the New York Rangers all-time scoring leader, Rod Gilbert. Gilbert spent 16 seasons - his entire career - playing on Broadway where he registered 406 goals, 615 assists and 1,021 points. Rod's story is an inspirational one that began when he was playing junior hockey with the Guelph Biltmores. During one of his games with them a freak accident occurred that threatened his life. A lid from an ice cream container made its way onto the ice and Rod slipped on it and wound up breaking his back. After two successful but very dangerous surgeries, along with physical therapy and spinal fusions, Gilbert made a miraculous comeback to hockey.

Gilbert made his National Hockey League debut when he was called up by the Blueshirts in a 1962 playoff series against the Toronto Maple Leafs. In his first contest he buried two goals and instantly caught the attention of the fanbase, coaching staff and management alike. While the Rangers eventually lost that series with the Leafs, Gilbert notched 5 points in four games and made a case for himself as an NHL caliber hockey player.

Gilbert was a part of the Rangers' ever famous GAG line, which stood for "Goal a Game" line. Accompanied by greats Jean Ratelle and Vic Hadfield, the threesome quickly became one of the more dominant offensive forces in all of hockey. The chemistry was due in part to the fact that Gilbert had been lacing up the skates with Ratelle back in Canada since the two were ten years old. In fact, when New York approached Gilbert about joining the team at age 14, he mentioned that he had a friend (Ratelle) that he has played with for years and that was better than him. The Rangers then signed Ratelle without ever seeing him play to join Gilbert in New York.

Continue reading after the jump.....

In 1972 Gilbert had his one and only chance to win a Stanley Cup Championship. Unfortunately the Blueshirts fell short to Bobby Orr and the Boston Bruins and Rod would never be able to kiss Lord Stanley's Cup. I always wondered how that felt to a player such as Gilbert. I mean, he had a remarkable career but never got his hands on the most prized trophy in sports. That has to be a soft spot in his heart.

Gilbert was an NHL All-Star eight times in his career and also led Team Canada to an Olympic Championship as well. His prestigious scoring and knack for the net got him there and is what he became known for. There was only one other right winger in hockey history that he trailed in points and that was Mr. Hockey, Gordie Howe of the Detroit Red Wings.

Gilbert's accomplishments got him inducted into the Hall of Fame in 1982, only four years after he retired in 1978. Rod was also the first player to have his number retired by the Rangers on October 14, 1979. In addition to that, he was awarded the Bill Masterton Trophy late in his career for his persistent attitude during his journey to the NHL.

Today, Gilbert currently works for the New York Rangers organization and can always be seen with his beautiful wife Judie on hand for Ranger games at MSG. I have had the pleasure of meeting him on several occasions and he is a joy to talk to. He is like your grandfather, who as a child you would hear story after story from him about his past. That is the way Rod is and treats anyone like they are a member of his family.

Also be sure to check out Rod's hockey training device: The Power Arm