Share All sharing options for: Blueshirts By the Numbers: Numbers 8 - Steve Vickers

Steve Vickers came to the Rangers in 1972, just a year after he was drafted in the first round of the 1971 NHL Draft. 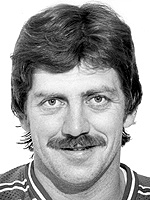 "Sarge" was everything you'd expect from a first round draft pick, scoring thirty goals his first season, and winning the Calder Trophy. Not only that, but Vickers scored the first goal of his career on his first shot on goal.

"I wasn't really highly touted going into that season," Vickers said. "I think I was sixth or seventh on the depth chart for left wing for the Rangers then, but as camp wore on I started getting more confidence."-Vickers to Rangers.com

That season, Vickers also became the first player in NHL history to score a hat trick in back to back games. He did it in home games against Los Angeles and Philadelphia on Nov. 12 and Nov. 15, 1972.

Playing on the Rangers "Bulldog" line with Walt Tkaczuk and Bill Fairbairn, Vickers scored more than thirty goals in each of his first four seasons, including a career high forty-one tallies in 1974-75.

Vickers was also a clutch playoff performer, scoring 49 points in 68 career post season games with the Rangers, including eight points in eighteen games during the Blueshirts magical run to the Stanley Cup Finals in 1979.

After two years of declining numbers, new coach Herb Brooks determined that Vickers was out of shape, and banished him to Springfield, the Rangers minor league affiliate at the time. Vickers did return the second half of the season, and banged home nine goals before hanging up the skates at season's end.

[Note by Jim Schmiedeberg: very special thanks to Russ Cohen from 100 Ranger Greats for letting me pick his brain]