Blueshirts by the Numbers: Number 11;"The Captain" - Mark Messier

Share All sharing options for: Blueshirts by the Numbers: Number 11;"The Captain" - Mark Messier

"O Captain my Captain! our fearful trip is done,
The ship has weathered every rack, the prize we sought is won..."

- From the Walt Whitman poem, O Captain My Captain

When we here at Blueshirt Banter were discussing this series and dividing up the numbers as to who would cover who, I was hesitant to take on much responsibility for two reasons; one being that I'm a little too young to remember a lot of the greats and how they played, and two being that I'm in the midst of quite possibly my last youthful summer of little responsibility leading to a small amount of time being spent on the computer. But when I saw that none of my fellow writers had claimed number 11, it was all I needed to speak up. This may be my only Ranger Legends post, and while I could describe Messier as a player and praise all that he has done for the franchise, we all know what he has done and what he represents to us and the city. Instead, let's take a trip back to the early 1990's where I quickly figured out who my favorite player of all time was to be. 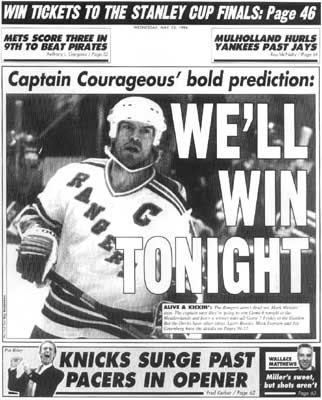 I was born in the summer of 1989, meaning in the spring of 1994 I was four and a half years old. Not many of us have vivid memories of such a young age, but I have one that I will never, ever forget. I started playing Hockey (read: Learn to Skate) at three, or so I'm told, and I quickly became consumed in the sport that has quite a history in my family. The New York Rangers quickly became my team of choice because for the most part they were on TV all the time but also because they had quite the first-line centerman at the time. Messier, to me, was everything a hockey player and a first line center should represent. Hands of butter, legs of a horse, and the determination and will of a warrior. "There's no way they lose" I apparently said to my Dad after learning we would play the Canucks in the Stanley Cup final. The memory I mentioned before came with a minute left in game 7 of the '94 finals, when my Dad woke me up to watch the Blueshirts kill the clock and clinch the cup. MacTavish won the draw with "1.6" left to go; finally allowing the ticker tape to rain and for Messier to jump with emotion. The number 11 would be my youth hockey number-of-choice for years to come.

When he was off to Vancouver, I did not understand why he left as I was only 9 years old. I lost some interest in the Rangers, but with his return in 2000 it all seemed righted. I remember when I missed the retirement on Thursday, January 12, 2006 because I had an away high school hockey game at 7 PM. Needless to say, I don't think I had the best game of my life.

So there's a little story as to what Mark Messier really means to me. Messier is obviously one of the best players the NHL has seen, and as we all sit here and wait for the next Messier to bless us in NY, the bar he set for others may be forever unattainable in a Rangers uniform. "Moose" took the world's most famous arena upon his back in the Spring of1994 and we will forever be grateful for that. I'll leave you with a picture that will never get old, and TSN's top 10 Messier moments (which should have been Top 11, as a youtube commenter pointed out). 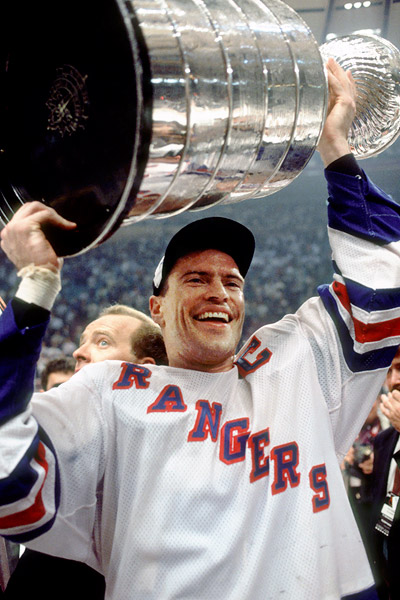 Honorable Mention at #11 before Messier:

- Vic Hadfield: From Wikipedia: "By 1964, Hadfield had cemented a place in the Rangers' lineup as an enforcer. Gradually, he focused more on scoring than on fighting - especially with feared enforcer Reggie Fleming on the squad - and paired with teammates Jean Ratelle and Rod Gilbert, became known as the famous "GAG line" (which stood for Goal A Game)."

- Ulf Nilsson: From Wikipedia: "In the summer of 1978, Nilsson and Hedberg signed with the NHL's New York Rangers for $2.4 million, further weakening the struggling WHA which would cease operations after just one more season. Nilsson's NHL career was marred by injuries due to a hit by Dennis Potvin of the New York Islanders, which is remembered by the "Potvin Sucks" chant that takes place during every Rangers home game at Madison Square Garde

- Kelley Kisio: From Wikipedia: "Kisio played 761 games in the National Hockey League. He played for the Detroit Red Wings, New York Rangers, San Jose Sharks, and the Calgary Flames. He was team captain for the Rangers for three and a half years."