The Rangers system is currently overloaded with defensemen expected to make some type of impact over the coming years.  The movement began a couple of years ago when Marc Staal cracked the lineup as a 21 year old, continued last year with 19 year old Michael Del Zotto, and is expected to continue with the signing of Ryan McDonagh this year.  What is not known is how much impact this type of youth can have on your .   Inspired by this look at young forwards entering the league, I'll break down the young defensemen.

With advanced statistic data only three years old, we'll focus on that era.  Since 2007-08, there have been 40 players and 58 player-seasons where a defenseman has logged at least 40 games at an age of 22 or younger (cutoff date is Feb 1st.)   Here's the list of those players:

For continuity with article, we'll look at the break down of each number based on age. Rather than picking on Bogosian, whose numbers don't exactly shine brightly, I'll combine his year with the 19 year olds. Here's what the data looks like:

For those unfamilar, Corsi is the number of shots minus the number of shots against while a player is on the ice.  It includes all shots directed on net, missed nets, and blocked shots.  /60 indicates the number distributed evenly for every 60 minutes of even strength ice time the player faces.  QC and QT values are based on the Corsi QC/QT numbers, and the ranks here are based on 6 defenseman.  In these cases, the numbers indicate mostly 2nd pair levels for both values.

Looking at the stats, the youngest of this group were given the hardest comp on average, the 2nd hardest teammates, yet relative to their , they're pushing the puck the best.  Intuitively this would seem correct, the defensemen capable of cracking a lineup at such a young age bring offense, first and foremost.  Their defense is usually the raw part of their games, and the numbers bare that out.  They have the worst GAON/60 and Corsi/60 rates among the lot.  From there you start to see the progression one expects, as the defenseman age, they get harder competition and harder teammates, and it becomes harder for them to push the play.  Of note, there are only 5 seasons to go on, so data tthere is likely higher than normal as a result.

Here's the look for just rookie seasons in the NHL at those ages:

Similar patterns emerge here.  At this point it's worth noting one special season that seriously weighs down the 21 year old numbers.  posted an impossibly bad -436 Corsi in his first year in L.A.  Only two players come within 250 of that number (Ryan Parent @ -347, Taylor Chorney @ -269).   Here is what the 21 year olds look like without JJ's atrocity:

Clearly, the numbers make more sense when you remove that season.  Finally, here's the scatterplot of the defenseman, showing their QC when compared to their Corsi rate (click to enlarge): 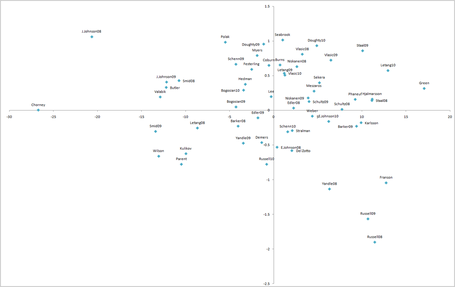 The x-axis here is the Corsi/60, the Y-axis is the QC.  Players in the right half outshoot their competition, and in the top half are playing competition that outshoots their competition.  Thus, the top right quadrant is the group that is outplaying the better competition in the NHL, and bottom left is the group that was thrown to the kittens, and got mauled anyway.   Marc Staal and M.E. Vlasic?  Quite good.  Ryan Parent and Ryan Wilson?  Not so much.  As for , well, at least he seems to have an excuse for his annihilation.

What this all does tell us is that young defenseman are capable of coming into the league and making an impact, as long as they're coming in on their terms.  When you are forced into the situation as Edmonton, Colorado, and Phoenix have been over the last couple of years, however, the results can be troubling.