Share All sharing options for: Blueshirts by the Numbers: Number 14 - Brendan Shanahan 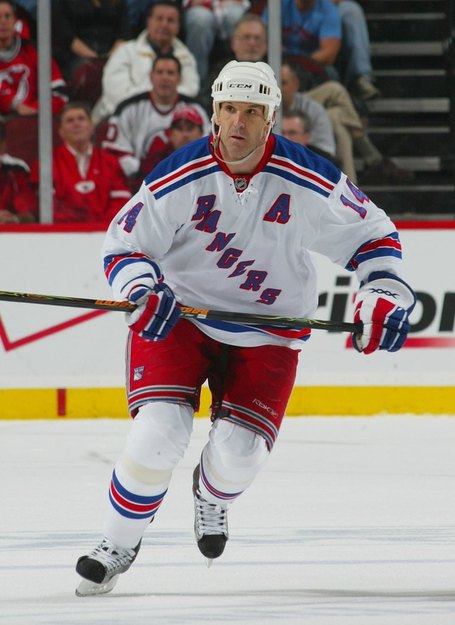 was a bit of a discrepancy between us Banter boys over who should be crowned the best Blueshirt to wear number 14 on their back. Immediately, I jumped in and said Brendan Shanahan. He may have only been a Ranger for two seasons, but what he did in those two seasons was remarkable and from a broader viewpoint, he has done so much for the sport of hockey. There was no doubt in my mind that this opportunity should be taken to recognize Shanny.

Shanahan was drafted by the New Jersey Devils second overall in the 1987 draft. He entered the league as a grinder/tough guy, believe it or not, but as the years progressed and he took the league by surprise with his scoring punch, he became more than just a grinder and was noted as one of the premier power forwards of all time.

Although he spent the better part of his 21-year career with the Detroit Red Wings, his time as a Blueshirt meant a lot to the fans of New York. In his first year on Broadway, he finished the season just shy of the thirty goal mark with 29, in addition to 33 assists for a total of 62 points. The following year he recorded 23 goals and 23 assists for 46 points. Also worth mentioning is that Brendan recorded his 600th career goal as a member of the Rangers as well, in the same year that Jaromir Jagr did.

Continue reading after the jump.....

Numbers were not everything for Shanny, though. There are plenty of memories tied to his name that do not involve scoring a goal. The main one as a Ranger that I always recall is his fisticuffs with Donald Brashear at center ice of Madison Square Garden in a game against the Washington Capitals. Earlier in that contest, Brashear took a run at Jaromir Jagr that did not sit well with Shanny. What first started as conversation from the benches later resulted in gloves dropped in front of a packed home crowd. That, my friends, is what a teammate is all about. That is old school hockey and Shanahan received a standing ovation for it, which was well deserved.

From an NHL standpoint, Brendan also had a major impact on the league itself. Many do not know this, but he was actually one of the main people involved in bringing the league back together the year of the lockout. Without him, who knows if we would have waited a second year before hockey returned again.

Now retired as a player, Shanahan currently holds a position with the National Hockey League as the Vice President of Hockey and Business Development. The research and development project that has been talked about this past week was his idea, as were most of the rules that were experimented with during the camp.

To wrap this up, I would like to share some personal stories I have to tell involving Shanahan. First off, I will never forget the day when my Dad showed me the newspaper article saying the Rangers acquired Brendan Shanahan. I was only in Middle School at the time, but I was well aware of who he was and what the team was getting in him. My Dad looked at me with a smirk on his face and said "yeah, I heard he is pretty good". It did not take long until he became my favorite Ranger and I was wearing the same number as him on my hockey team, using the same Warrior stick he did, and even performing his famous ‘one-knee fist pump' celebration when I scored a goal.

Another story I have is when I met Shanahan for the first time in person. I was at a function where all the current Rangers at the time were at a long table signing autographs on a poster provided by the event. Despite me asking, players were not allowed to sign anything but the poster - which means the puck I had in my hand would probably go home the way it went there - blank. But as I went down the line and player after player rejected to signing it, guess which player grabbed it from my hands and signed it with a big smile on his face? You guessed it: Number 14.