Blueshirts by the Numbers: The Collection of Number 10's

Share All sharing options for: Blueshirts by the Numbers: The Collection of Number 10's 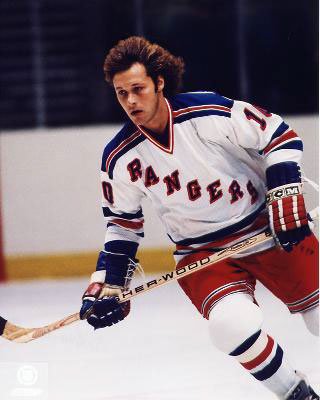 As we continue with our "Blueshirts by the Numbers" series, there are too many legends that wore the number ten on their back while playing on Broadway for us to narrow it down to one. So, we decided to combine this post into one and include all of the candidates for the best Ranger to wear number ten. At the end of the piece, I included a poll in which readers can vote on who they think was the best Ranger out of the candidates.

Selected with the Rangers` second of two first-round picks in the 1977 NHL Amateur Draft, Duguay entered the NHL after a stellar four-year junior career with his hometown Sudbury Wolves. He quickly made an impression at the NHL level, too, scoring 20 goals as a rookie and boosting his total to 27 and 28 in the next two seasons.

After a subpar, injury-plagued season in 1980-81, Duguay was fortunate to be named to Team Canada for the 1981 Canada Cup tournament. That international experience seemed to boost his confidence, and the following year he fired home a career-high 40 goals and made the 1982 NHL All-Star Game.

In addition to his on-ice success, Duguay became a major celebrity in the New York area during the early 1980s. He appeared in television commercials for Sasson jeans and was well known even to New Yorkers who didn`t see themselves as hockey fans. It was hardly a fleeting celebrity, since years after he retired from the NHL, Duguay continued to be recognized whenever he visited the New York area.

Traded to Detroit in 1983, Duguay returned to the Rangers in 1986 for another 82 games with the team. After his retirement, he got into coaching and eventually moved to Jacksonville, Fla., where he helped grow hockey`s popularity as head coach of a local minor-league team.

Continue reading after the jump.......

One of the great characters in Rangers history, Esa Tikkanen served three stints on Broadway, most notably as a member of the 1993-94 Stanley Cup Champion team.

After capturing four Stanley Cups with the Oilers, the famed Finn first arrived on Broadway on March 17, 1993, from Edmonton in a trade-deadline deal for Doug Weight. Despite his arrival, the Blueshirts failed to make the playoffs for only the second time in 15 seasons that year.

The following season, however, Tikkanen helped power the Rangers to the Stanley Cup, recording 22 goals and 32 assists for 54 points and 114 penalty minutes in 83 games. His playoff experience with Edmonton was vital in helping the Rangers win two Game Sevens, and in 23 post season games, No. 10 scored four goals and four assists for eight points and 34 penalty minutes.

In the summer of 1995, Tikkanen was traded to the Blues along with Doug Lidster for Petr Nedved as compensation for St. Louis` having signed Rangers head coach Mike Keenan.

With the Blueshirts gearing up for another playoff run in 1997, Tikkanen returned to the Garden from Vancouver along with Russ Courtnall in another trade-deadline deal for Brian Noonan and Sergei Nemchinov. He played an integral role in the Rangers` run to the 1997 Eastern Conference Finals, skating in 15 games and notching nine goals and three assists four 12 points and 26 penalty minutes.

During the 1997 playoffs, Tikkanen had three game-winning goals, including two in overtime against Florida. His overtime slap shot off the goal net camera in Game 3 was hit so hard that officials didn’t realize it had gone in until they were able to view the play in slow motion..

After leaving the team via free agency, Tikkanen soon came back to New York when he signed as a Group III free agent in the fall of 1998. In what was his final season in the NHL, Tikkanen was hampered by a knee injury that significantly decreased his production to only three goals and no assists in 32 games.

Pierre Larouche closed out his 14-year NHL career with four strong seasons in New York. During that run he had goal totals of 48, 24, 20 and 28, making him one of the Rangers` top scorers of the 1980s.

Drafted by Pittsburgh in the first round of the 1974 NHL Amateur Draft, Larouche was one of the hottest junior prospects ever to come out of Quebec. In his final junior season he set the QMJHL record of 157 assists and also scored 94 goals.

Larouche became an instant star in Pittsburgh, scoring 31 goals as a rookie and becoming the team`s first 50-goal scorer with 53 in 1975-76. That was the first of two 50-goal seasons for Larouche, who in 1979-80 became the first NHL player to score 50 for two different teams, when he tallied 50 for Montreal.

Following a four-year stint with the Habs, Larouche was traded to Hartford, where he battled injuries in 1982-83. That summer, he became an unrestricted free agent and signed with the Blueshirts. It would prove to be one of the team`s best free-agent signings of the decade.

Happy in New York, the man called "Lucky Pierre" exploded for 48 goals in his first season with the Rangers, setting a team record for goals in one season by a center. He also became the first player in NHL history to score 40 goals with three different teams.

Injuries marred Larouche`s 1984-85 season, and he Larouche suffered a setback in 1985-86, when he had to spend nearly half the season in the minors. He came back, however, with a vengeance, and was the key offensive force in the Rangers` drive to the third round of the 1986 Stanley Cup Playoffs. He led the team that playoff year with 17 points in 16 games, and his eight goals tied a former team record for tallies in one playoff year