Yesterday, August 31, 2010, was a very special day on several levels. First and 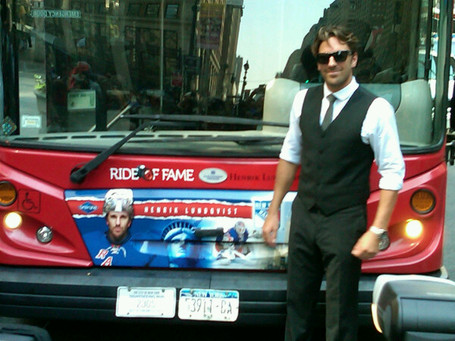 foremost, New York  Rangers netminder Henrik Lundqvist was awarded by Gray Line Bus Tours for his work with the Garden of Dreams Foundation. His award? A New York City Sightseeing bus named in his honor with a photo tribute to him on the front of the bus. To celebrate, the Rangers and Gray Line held a ceremony for the "King" on Seventh Avenue in front of Madison Square Garden, in which fans were invited to attend and cheer on their favorite goaltender. I was there representing my site, The Rangers Tribune, and in addition to having full coverage of the event, I also got an exclusive interview with Henrik that I shared with Banter readers below.

Here's what I asked:

Nick Montemagno: What are your expectations for the season this year and are you looking forward to it yet?

Henrik Lundqvist: Ah, my expectations. Well I am happy to be back and all of the guys are excited to be back. I can't wait to start camp and get going. I guess we will see how it [the season] goes.

NM: How have the informal pre-camp skates been going?

HL: Very great. They are a lot of fun.

NM: I heard Zuccarello-Aasen had a slick goal on you this morning. (Referring to a nifty goal scored at yesterday's skate)

Lundqvist also mentioned that he has been playing the sport of hockey since 8-years-old, when he used to skate on the lakes in Sweden with his twin brother, Joel. Growing up, Henrik said, his favorite players were Dominik Hasek and Patrick Roy, both of which were elite goaltenders during their time.

The ceremony was very well put together and fans appreciated Henrik taking time out of his busy schedule to participate. For a complete recap of the event, as well as pictures and video from the ceremony, head over to my site where that is all posted.