Share All sharing options for: Blueshirts by the Numbers: Number 21 - Sergei Zubov

Sergei Zubov, known as one of the best offensive defensemen of his time, will forever be in the hearts 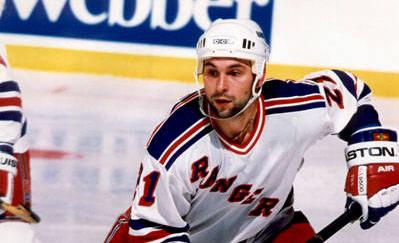 of Ranger fans for being a big part of New York's run to the Stanley Cup in 1994. Zubov spent three seasons with the Blueshirts in which he recorded 30 goals, 126 assists, 156 points and 61 penalty minutes. Even though the Moscow, Russia native spent the majority of his career with the Dallas Stars, Madison Square Garden was the birthplace of his tremendous offensive abilities as a blue-liner in the National Hockey League. Because of this, Blueshirt Banter has elected to crown Zubov as the best Ranger to wear the number 21.

The Rangers drafted Zubov in the fifth round of the 1990 NHL Entry Draft after watching him play with the infamous Red Army over in Russia. You can consider Zubov a sleeper pick in the fifth round since he later established himself as one of the top Russian-born defensemen at the time. The Rangers jumped all over the opportunity and it was not a decision they would regret.

Sergei had his best season in 1993-94 by far, putting up 89 points in 78 games. He later added 19 points during the Rangers' Playoff Campaign that led to the Cup. In fact, Zubov, along with Sergei Nemchinov and Alexei Kovalev, became the first Russian to have his name on Lord Stanley's Mug. Most of Zubov's points came on the powerplay, where he was a true quarterback.

The Rangers ended up trading Zubov (and Petr Nedved) to the Pittsburgh Penguins in August of 1995 for Ulf Samuelsson and Hall of Famer Luc Robitaille. He went on to play one season in Pittsburgh and 12 in Dallas. Last summer, despite the Rangers again showing interest in him, he decided to make the jump to the KHL where he is currently playing now.

Also worth mentioning, in 1992 Zubov won a Gold Medal in the Olympic Games playing with the Unified Team and also picked up a second Stanley Cup ring in 1999 with the Stars.