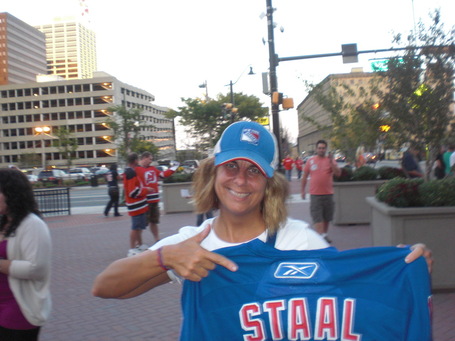 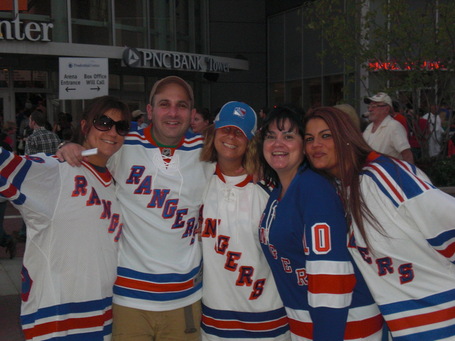 On Saturday we did a live remote front of the Prudential Center and gave away a bunch of fantastic prizes to  Ranger fans in attendance including this Marc Staal jersey to Kristen, a rabid listener of the show as well as autographed pucks and other Ranger swag to other diehard fans of the show.

We did this all in celebration of the Wade Redden banishment to the AHL and also to show our appreciation to the loyal listeners of Blueshirt Banter Radio who simply put, have made the show the Internet Radio juggernaut that it is today.

Tonight we will be airing a special Tuesday edition of the show because of  tomorrows Rangers game against the Red Wings at the Garden.

Jim and myself and more importantly you fans will be talking about the recent cuts of Mats Zuccarello and Evgeny Grachev and using our crystal balls to project who will be cut from the club after Wednesday's game.

We would love to hear from you on who you think will be cut or sent down to Hartford, so join the show which airs live over the Internet at 8 PM tonight.

We also have the Blueshirt Banter Chat Room, a forum which is chock full of Ranger fanatics that really adds more punch to a broadcast that is already a bit "punchy."

The Chat Room is the perfect forum to follow along with our two hour broadcast that streams live,commercial free, and uncensored.

Blueshirt Banter Radio is the true voice of the New York Ranger fan so make sure you're there !

To Listen to the show live or podcast just click below :