How the Rangers are being used

Share All sharing options for: How the Rangers are being used

While we can come to some conclusions from the chart after the jump, this post is more informative than anything. With that said, I would like to preface that information with some quick thoughts regarding the statistics myself and George here have been advocating on the site.

I got around to watching Moneyball this morning, and if you haven't seen it I would suggest you do. While it's a bit slow in some parts, it really captures the state of where "advanced" (I use quotes because these stats are more or less just understanding the context of the situation) statistics are in hockey at the moment.

More importantly I don't think being completely numbers oriented is a good idea. In my mind the right mix for player analysis is visual and statistical - what exactly is the correct amount of that mix is beyond me; but to ignore the numbers and give an irrelevant excuse as to why is just ignorant. I say this not because I think the numbers are always right, but because by dismissing the statistics you essentially dismiss another set of eyes/opinion on the player - an opinion that encompasses all 60 minutes of the game, not just the parts your eyes witnessed.

So that's the end of my ramble - click through after the jump to see how the individual Rangers have been used so far this season.

The method of creating this chart is becoming fairly popular amongst us numbers folk (I may not have it 100% correct - but the nuts and bolts are here), its just nice to see in the end. So what does this chart say? Its easy - the closer a player (by number) is to the top left hand side of the chart the harder the role he has on the ice. The simplest way to do this is to look at the Quality of Competition (QUAL Comp) a player usually plays against and where they are being deployed out onto the ice with their Offensive Zone Start %. Those players in the top left hand corner have been coined as "heavy lifters" for the difficult (aka defensive) roles they play for their teams. Here are the forwards (all stats are 5v5 with a minimum of 5 GP this season): 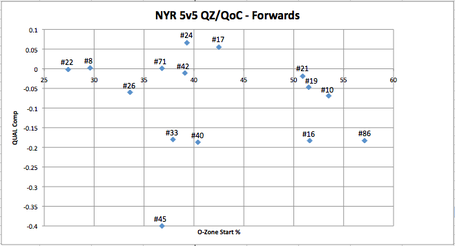 Nothing too shocking here. Brian Boyle and Brandon Prust do all the dirty work while Marian Gaborik and Brad Richards get all the limelight. That's just how it goes. Here are the defense:

Ryan McDonagh and Dan Girardi have done a great job filling in for Marc Staal, while Michael Del Zotto has seen his success come against weaker opponents - once again this is expected.

I don't have time right now to dive into details for players, but if anyone has any questions I'll get to them in the comments.