With the Rangers, no two games have been the same this season, but in each once, they are finding ways to win as of late. Tonight's 5-3 defeat of the Carolina Hurricanes at the RBC Center marks the club's fourth straight win after back-to-back losses that came before Thanksgiving, and they are now working their way up to yet another lengthy winning streak. The Rangers are rolling right now and seem like they cannot be beat.

The Rangers did not get off to the start that they would've liked in this game, as they found themselves down a goal just 35 seconds into the first period. Brandon Sutter beat Derek Stepan cleanly on the faceoff and won it back to Jiri Tlusty, who quickly rifled a wrist shot over the shoulder of Marty Biron. Artem Anisimov took the faceoffs on that line for the rest of the night.

New York answered back right away, however, when Ryan Callahan buried a rebound on the powerplay at 1:42 of the first period. Brad Richards saw the play happen before it actually did, and put a low shot-pass towards the net/Callahan in hopes of a rebound. The perfect execution there is why Richards is beginning to really make this powerplay function properly.

Jeff Skinner would score on a broken play before the end of the first to give the Hurricanes a 2-1 lead heading into the intermission.

From there, the Rangers took control of this game with three consecutive goals in the middle stanza. Ryan McDonagh started it up at 8:54 with a wrister he put through a Brandon Prust screen and past Cam Ward. Then it was Artem Anisimov feeding Marian Gaborik for a one-timer goal that put the Rangers up, 3-2, for the moment.

At 13:47, Sean Avery was caught out on the ice in the middle of a change, but to his benefit as he was stuck out there with Marian Gaborik. Gaborik ended up finding Avery in the slot with a slick little pass through traffic, and Avery wasted no time firing a shot through Ward's arm for the 4-3 lead.

Again, though, the Rangers allowed a late goal to Derek Joslin, so the Hurricanes cut the Rangers' lead to 4-3 before the end of the second.

Defenseman Michael Sauer ended any hope the Hurricanes had of a comeback at 5:42 of the third, though, with a wicked slap shot that turned out to be his first goal of the season. 5-3 would be the way this one ended.

More postgame analysis after the jump....

I hate to criticize players after wins, but goaltender Marty Biron was shaky in net tonight. He wasn't "bad" by any means, but he clearly had trouble controlling rebounds and picking up the tougher shots. He did end up stopping 28 of the 30 shots he faced in the game and also is now 4-1-0 in five starts, so I'm not complaining too much.

The second period was definitely the turning point of this game, due mainly because of the effort of Marian Gaborik. Gabby has been the team's best skater all season long, and as of late he's really been showing off how important he is to the Rangers. He's registering multiple points on a nightly basis (had a goal and an assist tonight) and has 12 goals on the season as well. Gaborik was my player of the game tonight.

You have to give credit to his linemates too, though. Artem Anisimov and Derek Stepan have done a tremendous job of getting Gabby the puck in open ice, and to have set-up men like that makes Gaborik's job much easier. It's nice to see Marian can succeed without having to do it all himself.

Brad Richards, meanwhile, has been doing his part as well. Like I said above, Richie is making the powerplay go lately, and we saw it again tonight. He has six points in his last three games - that's tremendous for him and the team, and, for now, he's absolutely earning his contract money.

I also thought Sean Avery had a standout game tonight, and is gradually establishing himself and earning more ice time. Same for Carl Hagelin, who had an assist tonight and now has points in every game he's played so far. And his linemate, John Mitchell, blocked a shot with his head, but thankfully was just fine afterwards. That's guts, folks.

And hey, shoutout to Michael Sauer for his first goal of the season. Sauer's quietly had a heck of a season for the Rangers this year on defense, so it's nice to see him finally notch an important goal late in the game like that. Literally everyone is contributing right now.

The Rangers are now 14-5-3 on the season, have won four straight games, and are 11-2-0 in their last thirteen games. They are also in fourth place in the Eastern Conference with 31 points. Those stats speak for themselves. 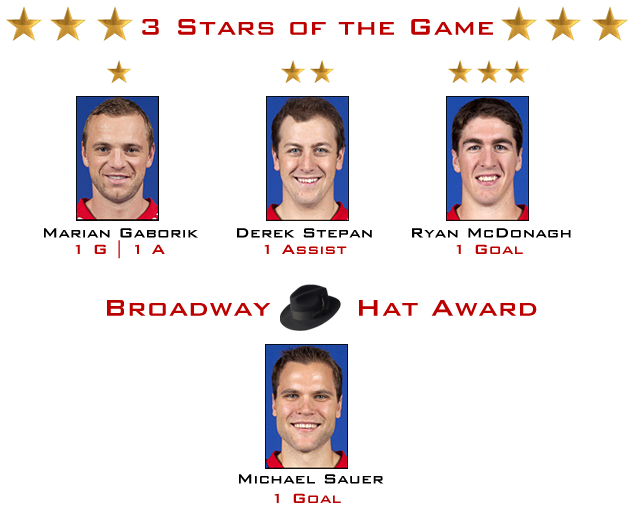