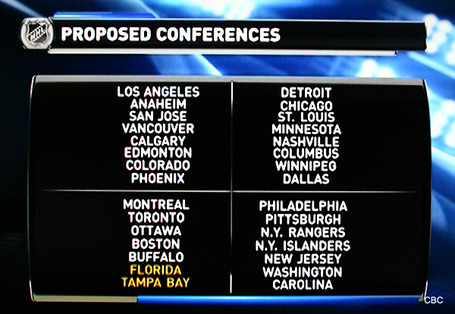 Bob McKenzie tweeted earlier that the National Hockey League could come to its final decision on a new alignment for next season. Although, there is no definite chance it will be done, seeing that gives a positive sign. Over the last few months, there have been a handful of different proposals regarding the realignment.

With their latest proposal, the Eastern and Western Conference are completely eliminated, and could follow a four conference format. Although the strange thing is, no team was moved back to the "East", as the two "West" conferences feature 16 teams, while the other two feature all 14 Eastern teams.

The playoff format would also be different if the NHL decides to go with this format. The top four teams from each conference would make the playoffs, and the first two rounds of the playoffs would be within the divisions. Following the second round, all the teams would be re-seeded for the third and fourth rounds.

While the NHL is trying to go back to its roots with the "old-school" standings format, I think it would be easier to just replace Winnipeg in the East. There have been a few teams like the Detroit Red Wings, Nashville Predators and the Columbus Blue Jackets that could easily slip into the Southeast Division.

Thus, there would be no hassle to completely redo the entire format of the league, along with new playoffs rules as well. In my opinion, I believe the NHL will just move either of those three teams to the East, followed by moving Winnipeg back into the West and call it a day. There is no reason to go through all of that trouble, and change something that had nothing wrong with it. Why fix something that is not broken?