According to Bob McKenzie of TSN, the NHL Board of Governors has approved a new four-conference alignment format that will take effect next season. The intense debates about the realignment took place today in Pebble Beach, and although the idea was heavily opposed by the Eastern Conference earlier, it eventually was passed this evening.

This will change the scheduling format as well, since it will mean seeing different teams more often than in the past. That could potentially create new rivalries, and also some different-looking playoff matches as well.

The only problem I have with this is that there are still several teams that could potentially relocate in the near future, so that will again result in a change in landscape, won't it? We'll see how it all plays out, but this is going to take some getting used to for sure.

The NHL has yet to announce the plan for how, exactly, the four conferences will be divided and which teams will be included in which conference.

Thanks to Cassie from Raw Charge for her map: 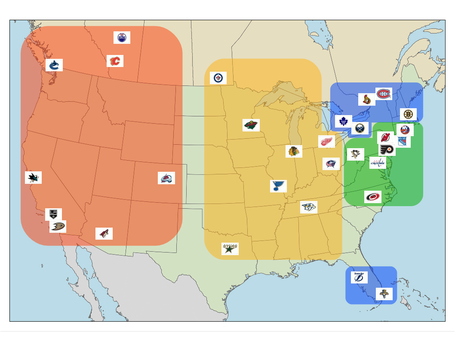