NYR Team Metrics: No News is not Good News

Share All sharing options for: NYR Team Metrics: No News is not Good News

Since the last piece on the Rangers general team metrics, the team has gone 6-3 (Nov. 14th). This is interesting because as George's November scoring chance piece pointed out, it was a decent month; but when you look at the top-level team statistics (some of which reflect possession talent - a correlated driver of wins) the Rangers still don't seem to have it quite going. Here is the chart:

Follow me after the jump for some quick thoughts, and even more of a data dump (OZQoC charts - aka how the Rangers are being used).

You'll notice I've added what's called "Fenwick" since the last update - this is because it is now more readily available thanks to Gabe Desjardins over at behindthenet.ca. The easiest way to explain what the Fenwick number is to use Corsi, which was its oringal base:

The Rangers are not doing well with Fenwick (or Corsi, for that matter) this season, meaning they're consistently getting outshot. This is not good because both numbers correlate well with future win percentage and in the end I worry because I trust these numbers to an extent - take what you want out of it in the end, though.

As for the rest of the chart, it hasn't really changed that much since Nov. 14th. The Rangers have scored more goals despite only a minor uptick in shots for, and that is because they're technically the best shooting team in the league as of 12/6 (Tuesday) at midday. While this sounds great, its not something to be very proud of, because shooting percentage fluctuates heavily and is more luck-based then you would like to think.

So that's that. Here's how the Ranger forwards are being used at 5v5 (see the previous article here if you need an explanation - click charts to enlarge): 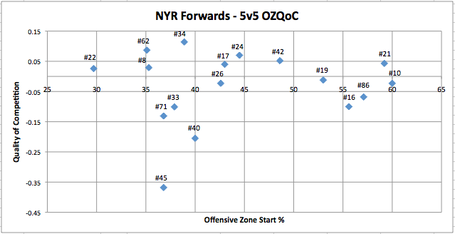 Nothing shocking here, Ryan McDonagh is officially the #1 D-man, Girardi and Sauer are interchangeable in the top six, and Eminger/Woywitka get the left-overs - just as it all should be.

Again, if you guys like this stuff let me know. It's more of a data dump, but we'll be able to look back and see the changes over the season. Plus, once again, it's good to see the numbers agree with the eyes (or visa versa) as always.