The Ebbs and Flows of the Rangers' Shooting

Share All sharing options for: The Ebbs and Flows of the Rangers' Shooting

The New York Rangers have been in a scoring drought for most of 2011, failing to score more than 2 goals in a whopping 18 of the 24 games for the calendar year.  Some have blamed the disappearance of Marian Gaborik.  Others have blamed the lack of high-scoring talent.  I'm going to take a different tact.

For the season, I've tracked scoring chances for the team, with the reason being that nearly all goals are scored within the defined scoring chances area.  Don't believe me?  Check out the pretty picture that Neil Greenberg put together for Japers' Rink, and note how many goals come from between the dots and below the top of the faceoff circles. The Rangers themselves have 162* goals on the year, with 139 of them coming from scoring chances, nearly 86%, so that area is highly populated for us as well.

*I haven't tracked the Kings game, so for the purpose of this story, it doesn't exist.

With scoring chances so important to goal scoring, this drought should be contributed to a lack of chances, right?  Not so fast: 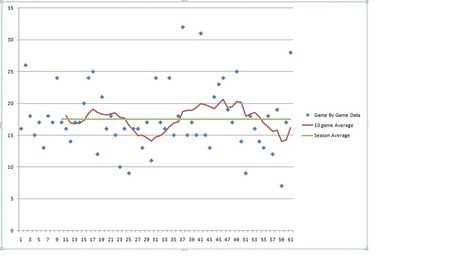 As you can see from the graph, for the most part the Rangers have hovered around their season average, but only after the 2-0 blanking in Montreal did they start to fall back below average.  How then are we to explain the sudden drop in scoring?  The answer comes next. 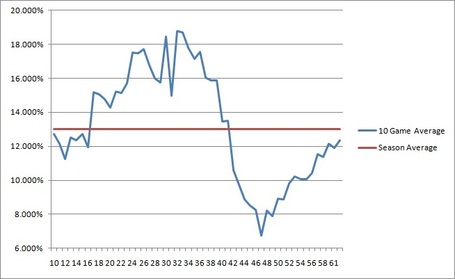 It's obvious when you think about it, but it makes sense, the Rangers stopped converting their chances.  From around game 39 onwards (no coincidence, the beginning of 2011), the team's conversion dropped precipitously, from around 16% down to just 6.7%.  Since then, the team has begun to convert again, gradually bringing their rolling average back closer to the season average.

As the venerable, terrifying Gabe Desjardins has shown, including with this post, on a singular game basis, there's a lot of luck involved in shooting percentage and goal scoring.  The same team (mostly) that started the year converting as much as 18.75% of their chances has as much ability to finish now as they did in game 10.  However, be it good opponent's goaltending, or just simply bad luck, the team hit a streak of shooting there that few, if any, teams in the NHL can overcome.

Add it to the list of reasons not to panic.