This will be the 6th time in NHL history that the Rangers and Capitals have squared off in the playoffs, with the Caps winning three of the five series played. Let's take a look at the playoff history between these two teams: 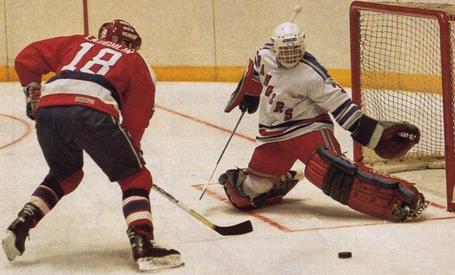 The Capitals finished with 107 points in the 85-86 season, 3rd best in the league behind the Oilers and Patrick Division Champion Flyers. The Rangers squeaked into the playoffs with a 4th place finish, 2 points ahead of the Penguins. After a stunning upset over the Flyers in the 1st round, the Rangers took on the Caps in the Patrick Division Finals. The Rangers pulled off an upset in Game One, winning 4-3 in overtime, but the Caps quickly bounced back, pouring on the offense with an 8-1 in Game Two, and a 6-3 victory in Game Three at Madison Square Garden.

With a 2-1 lead in the series, and a 5-4 lead late in Game Four, the Caps seemed poised to take command of the series. But Rangers winger Bob Brooke scored the tying goal late in the third, and provided the game winner in OT to give the Rangers a 6-5 victory, tying the series at 2 games apiece. The Rangers then went back to the Cap Centre and won Game 5 by a 4-2 score, and eliminated the Caps two days later at Madison Square Garden with a 2-1 win.

The Caps finished 3rd in the Patrick Division in the 1989-90 season, behind the Rangers and Devils. After upsetting the Devils in the first round, the Caps were set to take on the Rangers, who were fresh off 5 game series win over the Islanders.

The Rangers had finished first in their division for the first time since 1942, and were led by John Ogrodnick and John Vanbiesbrouck. The Capitals were finding success because of minor league call-up John Druce, who had 12 goals in the first two rounds of the playoffs that year. After losing the first game at Madison Square Garden, the Caps ran the table, eliminating the Rangers in 5 games. Druce scored the series-ending goal in overtime at Madison Square Garden, thus extending the Rangers streak without a Stanley Cup Championship to 50 years.

The Rangers were the 2nd place team in the Patrick Division for the 1990-91 season, finishing 3 points behind the eventual Stanley Cup Champion Penguins. The Caps beat the Devils in the next to last game of the season to clinch a 3rd place finish, putting them on track for a playoff meeting with the Rangers for the 3rd time in 5 years.

The Rangers went limping into the playoffs, having won just 4 of 14, while the Caps finished by losing only 4 times in their last 15 games. The Rangers took Game One at MSG by a 2-1 score, then the Caps took home ice advantage away in Game 2, earning the split with a 3-0 shutout. The Rangers returned the favor in Game 3, shutting out the Caps in Landover 6-0. That turned out to be the last gasp for the 1990-91 Rangers, as the Capitals went on to win the next three, and eliminate the Rangers.

The Rangers went into the 1994 playoffs as the favorites to win the Stanley Cup that had eluded the franchise for 54 years. They had finished first overall, and made quick work of the Islanders, eliminating them in 4 games in the Division Semi-Finals. The 7th place Capitals were next up for the Rangers, fresh off a tough 6 game series with the Penguins.

The Rangers took the first 3 games of the series, and with many Ranger fans (including yours truly and one of his brothers) making the trip to Landover for Game 4, a second sweep seemed inevitable. Adam Graves scored an early goal, but the Caps came back with four straight tallies, handing the Rangers their first loss of the playoffs, 4-2. Game 5 was tightly played, and a nervous MSG prayed for the Rangers to put the Caps away and not have to go back to Landover. Brian Leetch obliged, notching 4 points that night and leading the Rangers to a 4-3 victory, and a 4-1 series win.

The only playoff matchup between these two teams that went seven games, but never should have. The Rangers jumped out to a 2-0 series lead, winning the first two games in Washington, and held a 3-1 series lead after splitting games three and four at the Garden. It went steadily downhill for the Rangers after that. John Tortorella was suspended for Game Six, after an altercation with Caps fans in Game 5, and the Caps rallied to win three straight, including a thrilling Game Seven that was tied at 1 until the final minutes, when Sergei Fedorov ended the Rangers season with the series-winning goal late in Game 7.