Share All sharing options for: Scoring Chances for Playoff Game 1 vs Washington

For the newly initiated, here's the definition of a scoring chance:

We'll just jump headfirst into this, starting with the head to head table (click to enlarge): 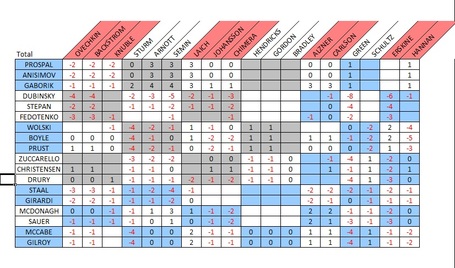 Quick explanation, the numbers in each box is the scoring chance differential for each player versus each opponent. Boxes with no number indicate there were no recorded chances with those players on the ice.  Based on the sea of red in most of the boxes, you can tell there was not a lot of favorable outcomes in this game.  The one matchup that seemed to work was the Vinny Prospal - Artem Anisimov - Marian Gaborik line against the Caps 2nd line of Marco Sturm - Jason Arnott - Alexander Semin.  Naturally, that's the line that was broken up in practice this morning.  The other noticeable result here is that of Brandon Dubinsky, who has no black to be found, and was a whopping -8 against Mike Green.

For the playoffs, I also thought it would be a good idea to track both how and where the chances are coming from.  To answer the how, I broke the chances down into 4 categories, listed below with the totals (number of goals in parentheses):

Transition should be fairly straight forward.  'Zone Pressure' meant any sustained attack by the offense that generated a chance, in contrast to the DZone turnover, which is a chance generated when the defense had clear control.  These are highly subjective, and only intended to give a quick guide to how the chances were generated. Any suggestions on additional categories would be welcome.

As you can see. the Washington Capitals' 'counter-punching' created more than half of their total chances for the game, and twice as many as the New York Rangers were able to generate, and both of their goals were quick strike situations.  Looking to game 2, the Rangers' D needs to slow down the pace of the game to benefit.

For the 'where' of each chance, I broke down the chances into 4 areas, shown here in this incredibly pitiful MSPaint picture hack job (hey, I'm the math guy, not the art guy): 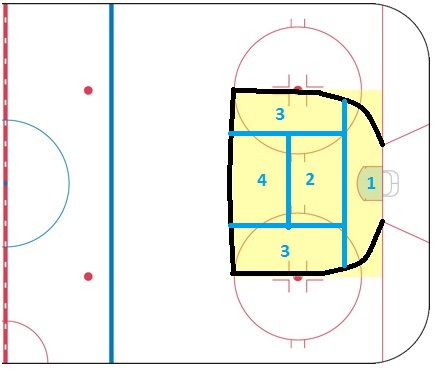 Now that you see the guidelines, here's where the chances came from:

Again, the zones are a bit subjective, and suggestions on how to improve this data is welcome.  I think it is telling to that the Rangers were not able to keep Washington to the outside much, with 17 of the 21 Caps chances coming from up the middle and around the net.

Finally, here's the raw data.  The OT gave Vic Ferrari's script some issues, so while i was able to manually correct the data here, there's no individual player ice time/chance summaries this go around.