Share All sharing options for: Scoring Chances for Playoff Game 2 vs Washington

Once again, we'll just jump right in to the data.  For those who missed it, the info from Game 1 can be found here. 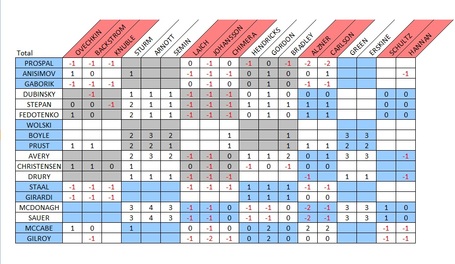 The team gave a much better defensive effort this time around, and it shows up here.  In game 1 showed a lot of matchups where the New York Rangers took the short end of the stick.  This time around, the chances were mostly favorable, with only the 3rd line of Brooks Laich, Marcus Johansson, and Jason Chimera for the Washington Capitals really getting the better of play.  There was some score effects going on with the Caps content to hang on to a 2-0 lead in the 3rd period, but after losing 14-8 with the score tied on Wednesday, the Rangers 5-2 advantage this time when tied is still an improvement.

Looking at the types of chances again, there's also some positives:

The Rangers did a much better job of limiting the Capitals transition game, which once again accounted for 50% of their total chances.  The one faceoff chance for the came on the PP, with Jason Arnott winning the draw against Chris Drury, and 8 seconds later the puck was in the net.

Here's where the chances came from (if you didn't see the map, click here)

The Rangers also did a much better job of keeping the Capitals away from Henrik and away from the middle of the ice.  Even the zone 3 chances were further from Henrik Lundqvist, mostly coming from Alex Ovechkin launching from the above the dots.

Finally, just to add more data, here's the breakdown of where the chances came from:

To define, 'COG" is a chance on goal, similar to a shot on goal.  Oveckhin had 5 chances, but because only 2 hit the net, his COG is 2.  The assist column comes from any pass that led directly to a scoring chance.  So while Alzner's pass to Ovechkin for the break away counted, the Green shot that was blocked and caromed to Arnott for the goal was not.

This table's intent is to shed some more light on who is generating chances.  So whlie Derek Stepan did not get any chances himself, he did set up 2, which for a playmaker like him is just as valuable.

Lastly, the raw data again, for those who want it: