Share All sharing options for: Scoring Chances for Playoff Game 3 vs Washington

Just as the Game 2 loss had quite a few positives in the underlying numbers, this Game 3 win by the New York Rangers has a lot of negatives.  We start once again with the head to head table: 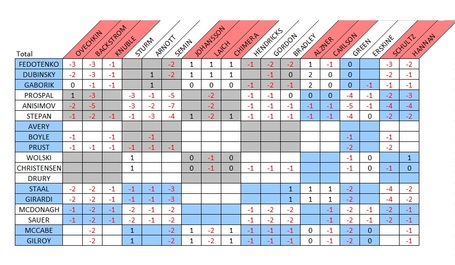 This chart contains many more similarties to Game 1 than Game 2, where the Rangers struggled to find many/any favorable matchups.  Like Brandon Dubinsky last time, this time Artem Anisimov was steam rolled, especially by Alexander Semin who was +7 against Anisimov when the Caps were only +8 at ES all together (12-4 for the game). It should be reminded here that this only accounts for 5v5 play, and that neither Christensen's goal (5v4) or Dubinsky's (4v4) were credited chances anyway.  The goal going into Game 4 continues to be finding more scoring chances at even strength to test Michael Neuvirth.

Moving on to the other tables:

As one can imagine based on the H2H, Semin led all comers with a hand in 6 of the Washington Capitals' chances.  Marian Gaborik, gets the "god bless him he's trying award," as he's now logged 10 scoring chances in the series without a goal.   Most importantly, there's the signs of life from Dubinsky, who was in on 3 chances, even excluding his goal.

Chance types have continued the same pattern, the Rangers get most of their offense from forechecking and zone pressure, Caps get theirs via a more balanced attack that is led by their transition game.  Not much of a surprise, and thus not much to explain.

Apologies for the short summaries, the Jewish Holiday's leave me short on time. To those who celebrate, Happy Passover!