Share All sharing options for: Scoring Chances for Playoff Game 4 vs Washington

I'm going to switch things up this time, and lead with the individual chances rather than the head to head.   Some reminders for the chart below.  First, the definition of the scoring chance again:

The name that instantly stands out on the list is Marian Gaborik. He had seven scoring chances in the game, easily the most of either team and the highest output of the season for him. (his previous high was 6, registered twice). He has [deservedly] taken a lot of heat for the gaffe at the end, but he was the only person to muster a quality shot in the OT periods.  Combined with his linemates, Brandon Dubinsky and Ruslan Fedotenko, they produced 65% of the chances for the New York Rangers.

Overall, as has been the custom in this series, the Washington Capitals had more chances in the game. This time, however, it was the result of the 3rd period, and especially the OTs. More on that after the jump.

Unlike in previous games, I've broken the head to head charts down into sections. The first chart here is the 1st and 2nd periods: 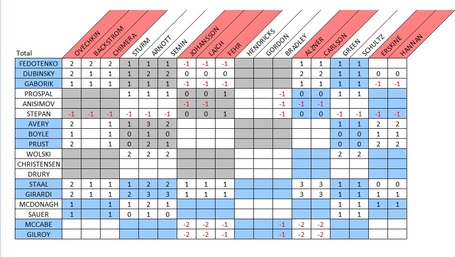 For 40 minutes, the Rangers could really do no wrong.  Bryan McCabe and Matt Gilroy had their struggles, but overall the team had an edge in chances regardless of the matchup, really for the first time all series.  Then, the 3rd period started: 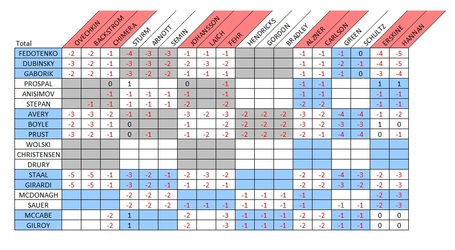 From the 3rd period through the overtimes, the Capitals' depth really did a number on this Rangers team.  Artem Anisimov's line was able to keep events at a minimum at least, but Dubinsky and Brian Boyle's lines were overrun by every line the Caps iced. The total head to head looked like this: 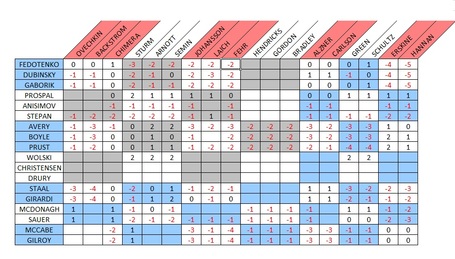 Not surprisingly, the other breakdowns show a similar disparity in play:

Over the first two periods, the Rangers effectively shutdown the Washington transition game, which has been the primary source of their offense. Not only that, but for the first time in the series the Rangers found a transition game of their own, getting multiple chances.  Then the 3rd period came around, and Washington found their game again.  In particular, they were able to force a lot turnovers from the young defense (and older sniper), and the mistakes led to goals.

Lastly, the same story comes in relation to where the chances are from.  (Map here)  The Rangers were able to attack from all angles for two periods, and then Washington came out and pushed play, taking away any chances from directly around Michal Neuvirth, and forcing their way to the front of Henrik Lundqvist, created the giant momentum ball that pushed the series away from a deadlock and toward the 3-1 hole the Rangers find themselves in now.

All told, the Rangers finally played at their best, but could only sustain it for 2/3 of the game.  To win game 5, they'll need it for the full 60.