Share All sharing options for: Scoring Chances for Playoff Game 5 vs Washington

The season finale ended with the Washington Capitals stifling the New York Rangers offense once again.  The Rangers had a 31:32 stretch in the game without a scoring chance at even strength, and for the 7th and 8th times in the series, they were held to 2 or fewer chances in a period.  For comparison, that happened only 33/240 tracked periods during the regular season.  Credit the Capitals' defense, blame the Rangers' offense.  Either way, the series ended in part because of those numbers.

Here's the head to head for Game 5: 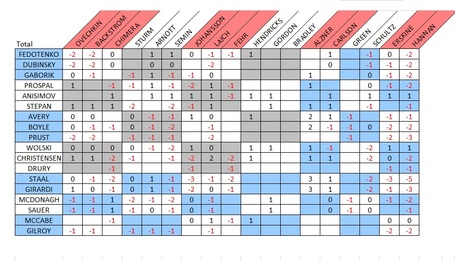 Score effects come strongly into play here, as the Rangers only had chances by Brian Boyle and Wojtek Wolski in the first two periods. Otherwise, the game turned out fairly even, with only the Cap's third defensive pair really having a consistent edge across the matchups.  As normal, the rest of the data is after the jump.

The Capitals' stars made sure there would be no Game 6 this time around.  Alex Ovechkin, Alexander Semin, and Mike Green accounted for 8/13 chances (not incl. Green's goal), and all 3 goals.  Meanwhile, the Rangers got chances from their enigmas, while getting little to nothing from the several 20 goal scorers on the team.

It's almost like a broken record.  The Caps got out in transition, got next to Henrik Lundqvist, and converted their chances.  The Rangers were kept to the outside, and their forecheck, while strong at times, generated no shots.  WIth the exception of a few periods, this was the trend all series.  I could go on, but I'll save that for the series summary later this week.  For now, we have an entire offseason to talk about how the Rangers can improve.