There's someone out there that hasn't been talked about much. He's a big name, a goal scorer, a veteran presence and is a big body that can get to the net.

I know you guys are all wondering who is it?

So...you wanna find out who it is? Are you really that curious?

If so...follow me after the dramatic music 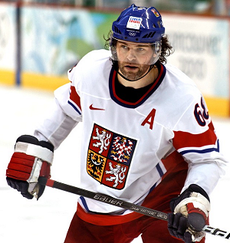 Yes, Jaromir Jagr, and before you jump on me that he is too old and that he's been playing in the KHL, he's still putting up a point per game pace.

But bare with me, the guy still has something left in the tank and he left the Rangers because everyone believed that he was done.

Well, I believe he's due for one last run with the Blueshirts. He won't be an expensive signing and I feel that he is worth the risk, put him on the second or third line playing with an improving and young core of offensive talent could give his old legs one last bit of gas for an 82 game set.

On a team filled with good, young, talent adding a guy like Jagr adds two things that this team could use

1) Even more goal scoring: The guy's still got talent (maybe not at an elite level anymore but he certainly can add a good 20-25 goals)

2) Veteran leadership: While we know that Callahan and Dubinsky are the leaders of this team but we can always use a good veteran leader that can also contribute to the offense more than Drury/Fedetenko/Prospal have.

Now I know this is a long shot and some would even call it a pipe dream (or maybe an LSD hallucination) but what is the harm in signing Jagr to a 1-2 year deal worth 1.5-2 mil...to me its a good, cheap move that the Rangers can make that is low risk and high reward