Share All sharing options for: Rangers Analysis: The Downside to Brad Richards

Yesterday, Joe covered the upside to the signing of Brad Richards in detail.  We've signed a player that is top 10 in the league in assists per game since the lockout, and the cap hit is a somewhat friendly $6.667m.  Unfortunately, there is a downside to be worried about, and so we're going to breakdown each one of them here.

It's easy to do a quick google search of Brad Richards and find he's a -72 for his career, and -16 over the last 4 years.  It's not much harder to find some reasons why.

For the behindthenet.ca naive, I'll give a little background here.  Corsi is simply the measure of shots recorded for subtracted from shots recorded against, while a player is on the ice.  It includes all missed nets and blocked shots.  Corsi Rel QoC is a quality of competition metric based on Corsi Rel, or a players' Corsi rate while he's on the ice compared to the rate while he is off the ice.  For a full explanation of the method used, please check out the BTN FAQ.  Corsi QoT is similarly a quality of teammates metric, based on simply the Corsi rates of his teammates.  You can find a full primer on how each is used here.   ZS% is ZoneStart%, the percentage of the time a player starts in the offensive zone compared to the defensive zone.  Adjusted Corsi is the Corsi rate of the player adjusted based on those zone starts, calculated via some excellent work done by JLikens.

Now that everyone is sufficiently confused, we can plainly see that Brad Richard's Corsi has been consistently diminishing now for several years.  This is happening despite weakened competition, and even being thrust back into an offensive role could not stop the trend.  Yes, his teammates have also declined in rapid fashion, but this just tells you that Richards alone is not enough to carry a line forward, even against weaker competition.  He's going to need help on his line, or all the shiny new offense will not make up for what is given up on the other end of the ice.

There's no question that a 40-year old Brad Richards will not contribute the same value as the 2011-12 version.  How much will the drop off be though?  Following up on some excellent work done by SBN user nhlcheapshot, we can use the comparable players that he used and compare them via Tom Awad's GVT stat, the best 'catch-all' stat that we currently have available.  The list of players can be found here, while the GVT data is located here. (Warning: The GVT file is 12MB, so it may chew up your memory a bit while loading.) 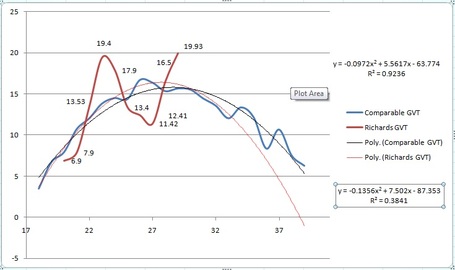 We see that there is a very obvious and reliable (R^2 = .92) trendline downward past the age of 30, where by the age of 37 (notable because of the way Richards' contract is structured), the players are contributing around just 10 goals above replacement.  This still translates to around 3 points in the standings, but is a significant dip from the 5 points they provide in their primes.  Further, as Rob Vollman has shown, every 3 goals above replacement is worth about $1m.  That means the expectation with that deal is around 20 goals above replacement, the equal of players like Alex Ovechkin and Martin St. Louis last year.  It should be obvious that Richards is not going to give value via this metric long term, and even in the short-term, the team will need Richards to very productive quickly.

This is non-statistical, but every bit as important when it comes to the impact of the contract.  We saw with Chris Drury how quickly things can go sour.  Brad Richards is not Chris Drury by any means, but when the decline happens, there will not be much of a solution, short of a retirement, or future CBA amnesty buyout that will allow the Rangers to escape his cap hit.   This does not have an immediate impact, but something to log in the back of the mind.

These things are causes for concern, but by no means does this mean that the Rangers should not have signed Richards.  This was a move that many wanted and even more thought was necessary for this team to build.  When it's all said and done, all that will matter is playoff victories, and how many of them in which Richards was prominently involved.  By that measure, anything is possible.