Since first starting this series of sorts the Rangers have slowly began to climb down off the back of Henrik Lundqvist and play effectively together as a team. With this play, and the career year King Henrik is having, this is the general reason why the Rangers are #1 in the East and #2 in the league in terms of results as of today. As all of us know around here at Blueshirt Banter, the Rangers have indeed gotten better in most facets of game as the season has progressed - whether you trust your eyes, the numbers, or both. My only concern with just fewer than 45% of the season left to play? Henrik Lundqvist and his .936 Save %.

Now don't get me wrong, Henrik completely deserves his save percentage and his GAA of under 2 - he literally carried the Rangers in the first ten games of the season when they were pulling results out of that magic European Broadway hat. So what is my concern? Simply put: just pure bad luck in any form. Whether that bad luck would be bad bounces or, god forbid (knock on wood), an injury of some sort, there's no reason why Lundqvist can't be the Tim Thomas of previous seasons (in terms of extremely high save percentage). Currently at even strength he's posting a .941% while being .909% on the PK. His even strength is higher than usual but not out of Henrik's realm, but while on the PK he is playing out of his mind, as Lundqvist is usually sub-.900. While he may naturally regress slightly towards his .920 career average, I have some doubts because since game #10 this is the best team Lunqvist has played in front of in his career since the 2007-2009 era (when Lunqvist posted sub-.920 save percentages).

Lunqvist is having a career year so far, and if the Rangers continue to outshoot (in all shots - aka on net, blocked, and missed) and outchance their opponents, only bad luck can stop Henrik in my mind. Let's look at some charts:

Every single one of those metrics in the charts is an improvement, once again. Yes, this includes the dip in Goals For/60 and Shooting percentage. This means the averages are slowly starting to stabilize, meaning we're seeing more of the true talent the Rangers are displaying to get the results in the standings. Just incase if anyone forgot or doesn't know what Fenwick is:

The easiest way to explain what the Fenwick number is to use Corsi, which was its oringal base: 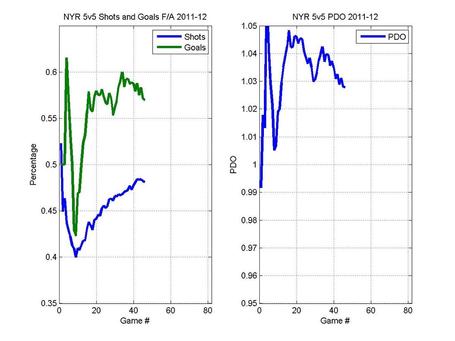 Keep an eye on the blue Shots line, as we can all see the improvement since around game 10 in the season. Good teams end up with this number between 0.5 and 0.55 - elite teams shade towards the 0.55 ratio (click the link above and check out Detroit, St. Louis, and even Pittsburgh - when the Pens get healthy they will be scary good). The Rangers have made this line drive upwards in such an aggressive fashion because they've been consistently been putting more pucks towards the net than their opponents (aka over the 0.5 ratio). This was not the case yesterday versus Boston, as I would have given the Broadway hat to Lundqvist.

With that said, let's switch focus from the team to the individuals, and below is how John "their fourth line scored two goals" Tortorella is using his players: 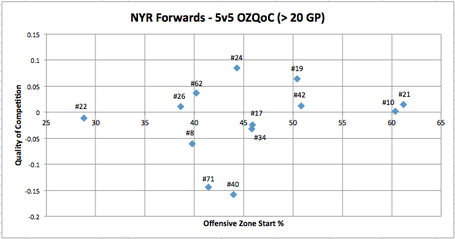 I upped the minimum games to 20 for this edition, as the forward core has really been rounded out. The only absence is Wojtek Wolski, and while I think in no way should he be traded, I still wouldn't alter the lineup that we saw win in Boston yesterday. Of note: Brian Boyle is the heavy lifter on this team, while the sheltering of Gaborik and Stepan is working just fine, so no reason to change that. Richards is scoring less often than in previous years due to playing the other teams top competition as well (who could have predicted this?) To the defense:

Now I left the minimum GP on the defense to 10 because I wanted to show how Marc Staal is being brought along since his debut in the Winter Classic. So far he's in a third-pairing role, just as we've been told and seen. With any luck, he'll start to shade towards McDonagh and Girardi, and hopefully McDonagh is just really, really sore today and nothing more from that (suspendable) hit from Ference.

The Rangers are on the up and up, Lunqvist is still a Veizina candidate, and Marc Staal is being brought along nice and slow for what is looking like could be an interesting spring.