Share All sharing options for: New York Rangers Stats: Use "Elite" with Care

Note: Written on 2/15 before Chicago

Here's the non-mathematical formula that describes the Rangers for me right now:

Henrik Lundqvist is having his peak year in the NHL, and if he keeps his Save % above a 0.935% he's most likely going to win the Vezina trophy, as he finally deserves. The Ranger skaters, meanwhile, have been a top 10 NHL club since Game 11 in terms of Shot Ratio (SR in the chart below); which is a good indicator of future performance. To show how far they've come after their lucky 11 game start, I threw together a quick (very raw) chart: 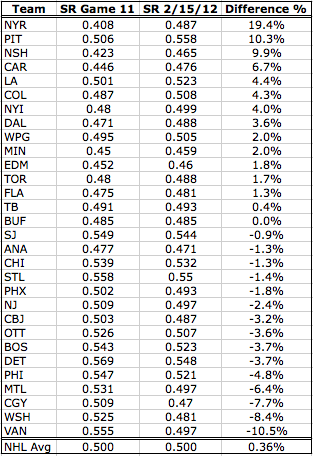 While this chart is somewhat unfair to certain teams, as they may have been on highs, mediums, or lows at Game 11, it illustrates perfectly the Rangers consistent improvement in becoming a complete team since that Halloween date with the Sharks. There are still clubs with better or equal skaters (DET, BOS, PITT, SJS, STL, VAN, and PHI - in no particular order), but to be honest none of them could match the contributions Lundqvist is making in goal.

So with all the happy and joy, where's my usual negative spin on things? I've got two today:

1) The recent win over the Bruins.

I missed the first period due to watching my brother's Junior playoff game. Texts, tweets, and the in-game tracked stats made it seem like it was a decent period with two NYR goals. Fantastic stuff, seeing as I only consider Pittsburgh, Boston, and Philadelphia as competition in the East right now (and in that order - god save NYR if Crosby comes back). Then the Henrik Lundqvist show started, and while he deserved all the credit in the world for the win, the two points earned by the players who didn't play within the NYR crease was frankly not deserved with that performance over the last forty minutes: 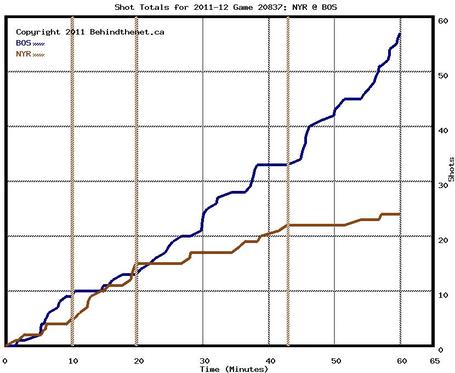 This is NOT a model we want to see for games going down the stretch. That third period in my mind? Pathetic. I could not WAIT for this chart to update in the morning after watching the third, just to confirm how poor the team played, and how well Lundqvist did. Don't get me wrong, I'm not saying the Rangers had to win this game 6-0 or something, but I want to see this team continue to improve going into the playoffs and really become the word I think we should all use with care: elite.

If the Rangers play in a similar fashion against Chicago, expect more of the same (aka Henrik or Biron having to do a lot of work).

I won't beat this topic up, but all I have to say if the season ended now his save percentage (0.941) would be the highest of the post-lockout Vezina winners. He's due for a natural slide (even down to a HORRIBLE 0.930), but if you want some more quick info go back to the last metrics piece and read the first few paragraphs.

Oh and Jim, I probably used Lundsanity in close to ten text message conversations over the past few days. #Lundsanity

No complaints here. Moving on. 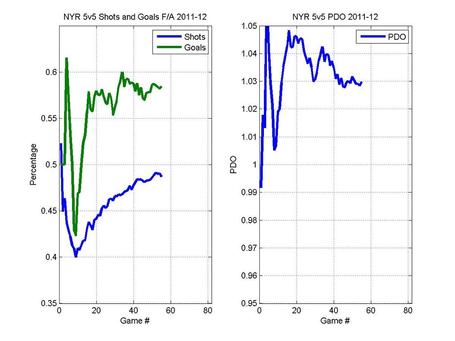 This is where that chart from before the jump applies. The Rangers have driven up slowly and surely, and while the curve is starting to flatten out, that is because the Rangers are really playing towards that 0.55 percentage line on an individual game basis (the "elite" level). The Rangers PDO is driven way up by Lundqvist's historical season.

And now to the data-dump part of the article. How the Forwards are being used: 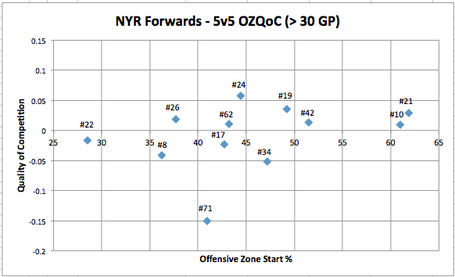 Not much change here in the last month. Boyle is a beast by taking the majority of D-zone draws and Torts is effectively shielding Gaborik and Stepan so they can just focus on offense. Otherwise, the only note I would add is that Rupp is basically an enforcer in my book, as he's absolutely awful and clearly Torts does not trust him in any sort of situation where the game is on the line. 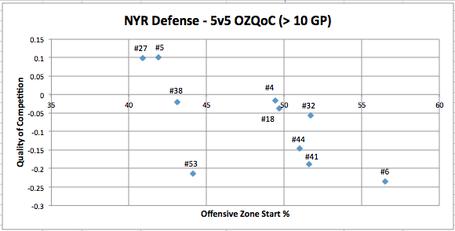 Again I included everyone over 10 GP because I wanted to get Staal in (he's at 19 GP). Seems as though he's gone from third pair to second pair in the past month, which makes sense. Also, Sather is looking smart for grabbing McDonagh.

The Rangers, to put it in a complete college mindset, have been invited to the Elite/VIP/Cool kids party for the first time in a while. While they can probably hold their own amongst the group, it never hurts to bring a few girls along either (especially the new Swedish exchange student).