Share All sharing options for: Expectations of Henrik Lundqvist

Henrik Lundqvist had the season of his seven-year career in 2012, leading the Rangers to their furthest elimination since the spring of 1997. And while over-paying goalies is a relatively common mistake made by NHL General Managers, Hank is one of the few that has arguably lived up to a big time contract worth tens of millions.

For those of you who know George's and my work around the Banter or pay attention to the developing use of "advanced" statistics in hockey, one term often thrown around is sustainability. With that said, lets get something clear here: the New York Rangers do not win the Eastern Conference crown and probably don't even make it out of the second round without King Henrik. His value last season CANNOT be understated whatsoever. As a result, the Rangers will need that type of performance again if us, as fans, are to expect another Top-of-the-East season and a long playoff run.

This got me thinking. Can Lundqvist replicate his Vezina season and, if so, what are the odds? Join me after the jump for more, unless you want to go continue to bash your head against the wall and talk about the CBA somewhere else.

One problem when evaluating goaltender performance is it can be very much influenced by the team in front of them (see: Osgood, Chris). I am in no way a leader in dissecting goaltender play, but what I do understand is the need to use Save Percentage as a benchmark, and then dissecting it into Even Strength and Penalty Kill SV% (nearly 80% of gameplay is at ES, while a goaltenders worth to a PK is naturally important). I've done just that for Hank below:

Two things pop out to me. First of all, Henrik has had a nice natural progression in ES Save% leading up to this season, which is encouraging because of its conformity. Secondly, and obviously, would be the uptick in the PK SV%. Given that Lundqvist had only once cracked the 0.900% mark in his previous six seasons, I thought this meant that either A) the Ranger penalty killers really helped him out or B) the level of shots he faced changed. The answer? A mix of both.

The Rangers penalty kill last season ranked 5th, the best since 2008-09 when they were first overall in the league, and improved from 10th in 2010-11. This does matter, as five spots could mean anywhere between five and ten goals against (i.e. nearly two wins) depending on the amount of penalties. More importantly, though, was the level of shots Hank saw on the Penalty Kill:

While the number of Even Strength shots seems to match Lundqvist's changes in ES Save% (lower shots, higher Save%), it really doesn't explain the two Penalty Kill Save% spikes as he has seen less and less shots since his second season in 2006-07. There are three explanations in my mind. That the PK units have helped (maybe); that Lundqvist employed some unique advantage in 08/09 and 11/12 on the PK (unlikely); or he just had some puck luck on his side in those two seasons (very likely).

Outside of the Penalty Kill Save%, its mostly apparent that Lundqvist could sustain his level of play as long as there wasn't a major uptick in shots faced thus far. Luckily for him, he's also got the following evidence on his side as well.

Henrik turned 30 on March 2nd of this past spring, so for all intensive purposes he was 29 for the 2011-12 season. This puts him right in the heart of the above-average goaltender career arc curve, which you can see below (courtesy of J.P Nikota at Pension Plan Puppets): 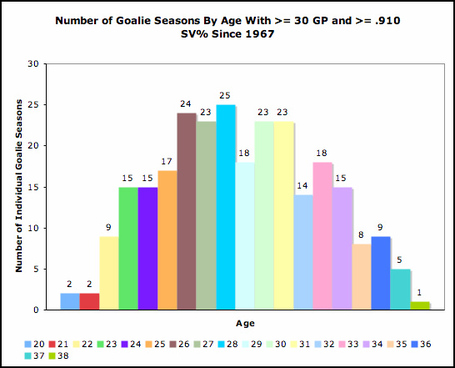 This bodes well for the Rangers, because it indicates that, historically, someone of Lundqvist's level could sustain his solid play through 31 or 32. This would also make the Rick Nash deal worth it all, seeing as NYR has about two, maybe three seasons to win a Cup with him before he starts severely declining. Either way, my overall point is what I'm sure most of you are thinking right now anyways: Lundqvist will be just fine.

My only quip with the whole situation is to not expect another Vezina-winning season, and this is for two reasons. Firstly, when I asked in February if Henrik would falter given his amazing performance through the season at this point, his Even Strength Save% when from an absurdly high 0.945% to a more normal (but still great) 0.933% in a matter of basically a month. This isn't to fault him, but that is a textbook case of regression. Secondly, in my 23 years there have been only 11 different Vezina trophy winners. He's got a good shot of repeating right? If this was the 90's, sure, but since the lockout it's been five different winners in seven years. There's just too much talent nowadays.

Look, I'm not trying to take anything away from Lundqvist, or to pick a fight with Ranger fans. I'm simply saying is that we're so used to Hank backing the team the past seven years that to an extent we all take it for granted. What we saw last season was nothing short of greatness, but to hold him to that bar now can be somewhat short sighted. If he comes out, posts a SOLID 0.923 Save%, there is nothing wrong with that whatsoever. Sure, some may call it a down year, but in reality it will just call for the skaters of the team to step up more, because lord knows the King has carried them enough the past few years.