When September rolls around, hockey fans across the globe begin to prepare for the start of training camp, and the upcoming hockey season (maybe not this year). However, a lot of fans begin getting excited for the annual release of the EA Sports NHL Series. Last year, EA Sports put forth a promising game with NHL 12, but they've raised the bar once again for NHL 13.

Unlike years prior, the development team has focused mainly on gameplay this year, and improving the overall atmosphere of the game. They have also touched upon the play of the A.I's which they dubbed "EA Sports Hockey I.Q". Want to run the 1-3-1 on defense? How about bumping up your team's forecheck? No problem. EA Sports has incorporated all of the real life strategies our beloved teams use night in, and night out in real life games on a single disc.

To go hand-in-hand with the gameplay improvements, EA Sports has implemented their most innovative feature this franchise has seen in years. Their new True Performance skating engine allows users to feel as if they are right there on the ice playing themselves. Try to make a turn while going full speed, and you may just end up taking a complete circle around the rink.

So without further ado, I present to you Blueshirt Banter's official review of EA Sports NHL 13. Enjoy! 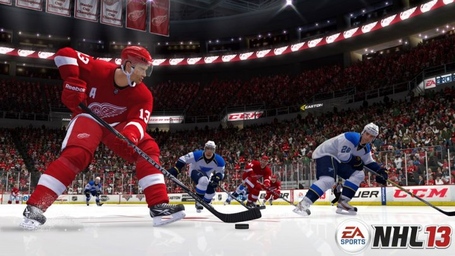 As stated above, this improvement alone takes the cake for the biggest addition in years. If you were to compare the difference between NHL 12, and NHL 13, there is absolutely no contest. Players never used to skate realistically, and the overall presentation of the skating engine felt like an arcade game. They were able to stop on a dime, turn without hesitation, and lacked that true fluidity of a hockey player.

Jump ahead to NHL 13, and you have a true representation of what skating as a hockey player truly feels like. No longer are you able to skate full speed down the ice, and turn on a dime. You are now required to manage your edges, and properly control your speed up the rink. The speed burst option (pushing the puck ahead) has been completely removed, and you now gain your speed by holding up the right stick. This allows you to gain the open ice, and use an explosive first step to give you the upper hand on your opponent. 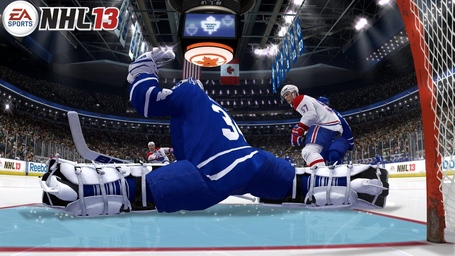 Adding onto their gameplay overhaul, EA Sports touched upon the A.I.'s and goaltenders. They've made strides every year to improve their A.I's but it eventually tailed off with humans exploiting their flaws. This year, EA Sports introduced an entirely new A.I. system where players are aware of all their surroundings. No longer will you have possession of the puck in the offensive zone, with both of your defenseman sitting outside of the blue line.

A.I.'s come fully equipped with the hockey smarts this year, and will read the current play based on what is around them. If a player comes down the wing with speed, they will likely back off and try to close the gap towards the middle of the ice. They will also take the body depending on the different situations, which adds a nice flow to an already solid game.

Moving onto the goalies, which also received a massive overhaul this year as well. Just like their player counterparts, goalies are also aware of the scoring threats around them. Goalies will often cheat as well, in the event of an odd-man rush in order to remain one step ahead of their opponents. They too, are equipped with some pretty ridiculous desperation saves, in the event of being caught out of position. They also have full movement of their limbs.

Gone are the days of pre-created animations where the A.I will only make the save one specific way in each situation. Now, you may have a goalie dive back on you, while moving his glove or stick to get apiece of the puck. Again, this adds that extra realism feature that the game has lacked for some time.

I almost forgot, users also have the ability to chop at pucks now, just as players would do in real life. You can chip loose pucks, or simply chop at a players stick to knock the puck loose. In order to perform the chop, you must angle your right stick towards the puck, and tap the right bumper. 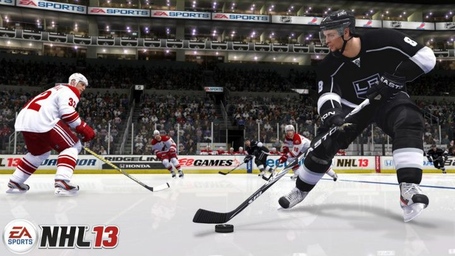 Taking a page out of Madden's book, is the introduction of NHL Moments Live. This mode allows you to select from a variety of different scenarios from the 2011-2012 season, and puts you on the ice to relive the moment. I think this mode puts a little variety twist on the game, as you will be put into different real life situations, to try and recreate history, or change it completely.

You will be allowed to play each moment on the four different difficulties (Rookie, Pro, All-Star, Superstar), and you will also earn HUT pucks based on the difficulty you play on, and the moment you chose. In addition to the 2011-2012 moments, there will also be moments added throughout the year as the 2012-2013 season progresses (whenever that occurs). 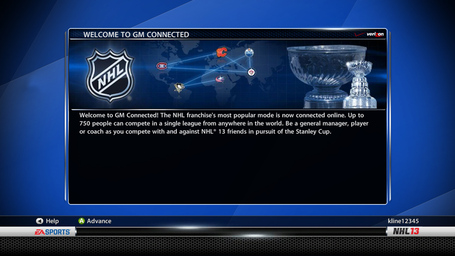 The EA Sports NHL franchise has never had an online dynasty mode in its history, and lagged behind many of their other sports games. However, this year, EA Sports provided us with an online dynasty mode, plus a bunch of extra goodies. GM Connected will allow you to connect with your friends all around the world, while all competing in the same league.

There will be a total of 750 people allowed in a single league, with each person being able to control either a player, a general manager, or a head coaching job. There is a variety of different options to choose from, and this allows users to play in which role they choose. As mentioned below in the NHL Companion App section, GM Connected comes with a fully compatible app for the iOS, which allows you to track and manage your team on the go.

Whether it be making trades, looking at standings, or comparing player stats, you can do everything you want, when you want. This EA's biggest step forward, in terms of a GM mode, and they surely didn't disappoint. I was lucky enough to get my hands on this prior to release, and I must say, you guys are in for a real treat. 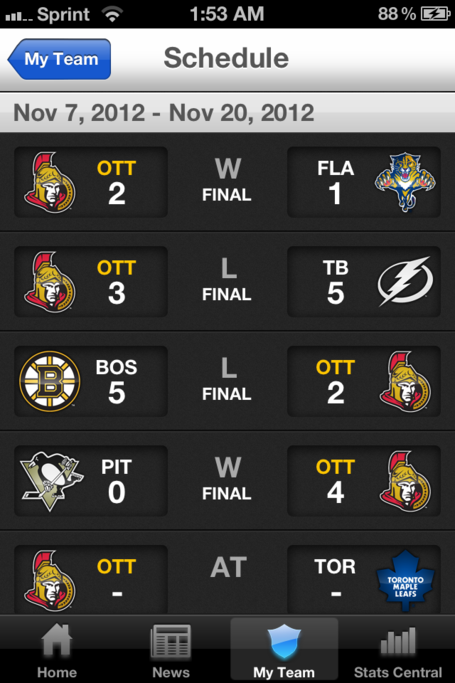 Finally, for the first time in franchise history, EA Sports is releasing a user companion app, that allows you to track your GM Connected leagues, as well as HUT teams. For GM Connected, you will be able to change and track your team on the fly. You can even trade players with other teams, right from in the main screen. As for HUT, it's similar to the GM Connected features, but you will also be able to access to auction house, in order to purchase cards for your team.

Click here for a complete overview of the NHL 13 Companion App.

That about wraps it up for this year's review of NHL 13, and as you can see, EA has definitely upped their game quite a bit. I absolutely love the new skating engine, as it makes the game much more realistic, and allows you to play competitive hockey as well. The GM Connected mode blows the other online dynasties out of the water thus far, as it gives users a wide variety of different play options. Overall, if you're an avid hockey fan like me, it's almost a no brainer to pick this game up. It's well worth the money spent.

Thanks for reading, we'll see you next year for NHL 14!

** Disclaimer: All photos and videos shown in this post are copyright of their respective owners. **