As The Rangers Adjust To New Systems, Defensemen In The Spotlight

With Alain Vigneault at the helm, the Rangers defensemen will be much more active offensively.

Share All sharing options for: As The Rangers Adjust To New Systems, Defensemen In The Spotlight

The 2013-2014, Alain Vigneault led Rangers have created attention for a number of reasons. From a sluggish start, to some early season injuries, there are a few storylines that have garnered headlines. But one of the most glaring differences between these Rangers and the John Tortorella adaptation has been its goals allowed.

Of course, it's early, and a nine-goal game will skew any goals against average with such a small sample. But the bigger item at play here is the systemic change the team, and more specifically the defense, is going through. The book on Vigneault coming in was that he had the coaching prowess to fix the Rangers' offense (if you're of the train of thought it needed fixing). But a project of that magnitude doesn't come without a larger overhaul, and a large part of Vigneault's transformation involves getting defensemen involved in the play.

And it's a more arduous task than many may assume for a few reasons. The philosophical shift is not only a decisive remodeling from Tortorella's system, but it's also asking players like Dan Girardi, like Ryan McDonagh, who have made a living and thrived on playing a more "stay-at-home" style to do something a bit out of their comfort zone.

But more to the point, with more offensive opportunities comes equally as much defensive accountability. Leaving the zone to join the rush opens up the ice to the opposition, and can create as many chances against as chances for. While there are intricacies to Vigneault's new defensive system that pertain more to the 'X's' and 'O's' side of things, the Rangers defensemen will have to find a balance between joining the rush, and not abandoning their defensive responsibilities.

The very first goal this season showed a bit of the indecisiveness and decision-making Rangers' d-zone players are currently facing, and at times struggling with. On this play, the Rangers won the puck in front their own net, and attempt to break out. But notice where the weak-side help is when Phoenix breaks up the clearing attempt. Everyone is above the dots, but the puck, having been turned over, is nearly at the goal line.

What happens next is a scrambled effort to recover. Michael Del Zotto skates below the goal line, and John Moore directly in front of Henrik Lundqvist. Derek Stepan pinches down on the boards, and Rick Nash, who lost contain in front, is simply turning and trying to make a play. When a zone breakout leads to a turnover, a counter attack can come rather quickly, and Nash was looking to pitch in defensively as soon as he could. But he loses sight of Kyle Chipchura, who's able to skate straight into the slot unopposed. 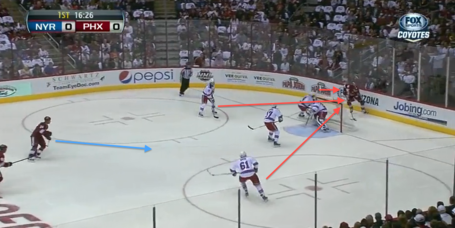 On the reverse angle, you can see the Rangers spacing, and what exactly led to the goal. Del Zotto and More are both above the dots, looking to potentially jump into the rush, but Stepan has yet to make a play yet. Oliver Ekman-Larsson comes down from the point, and Stepan turns the puck over right at the dots, parallel to where both Del Zotto and Moore are. Rob Klinkhammer is still at the goal line, and when the puck gets down to him, the Rangers are forced to recover with an unbalanced zone. 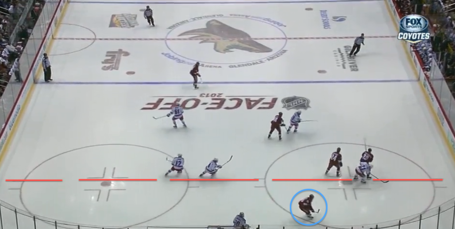 And here's the full play, with Phoenix capitalizing on the Rangers disorganized breakout.

But the Rangers are already beginning to look more familiar, and better equipped to make smarter decisions through their own and the neutral zone when transitioning up the ice. Take a look at this play against St. Louis from last Saturday. The Rangers take possession of the puck in their own end, and have a chance to rush up ice. Notice all five Rangers are in the zone with two St. Louis players. On the far-side of the play is Justin Falk is actually ahead of Taylor Pyatt, the puck-carrier. But Falk, noticing the numbers the Rangers have, and recognizing a situation to make a more conservative play, will slot back into the zone behind the forwards. 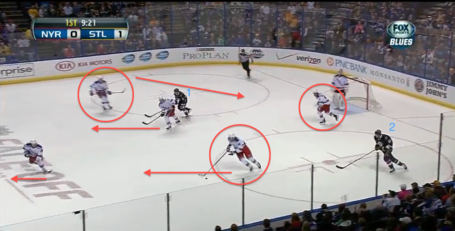 What happens next occurs in the neutral zone. Pyatt turns the puck over, and three Rangers get trapped past center ice. But notice the numbers in between the blue lines: There are three New York forwards, and four Blues' players, with Falk and Del Zotto having stayed at home. 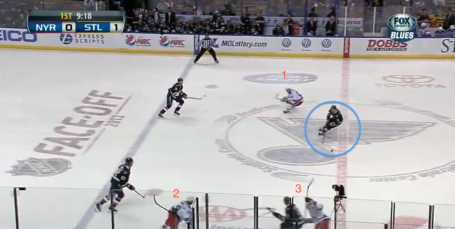 Even though St. Louis is quickly able to counter, both Falk and Del Zotto are able to pick up a man, making it a 2-on-2, and not an odd-man counter. The play ends with Falk blocking a Chris Stewart shot, and the Rangers averting giving up any quality scoring chance. 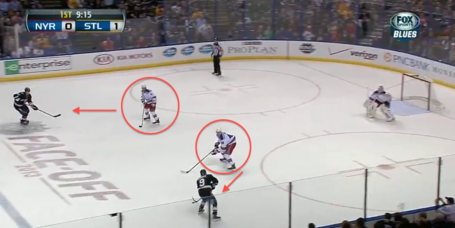 Of course, these zone breakouts and defensive reconstructions do have a desired end-game. When executed properly, sending numbers up the puts pressure on a back-checking defensemen or forwards, and makes it much more difficult to organize and space the ice in transition versus when a team has more time to get numbers behind the puck.

In the play below, while he's trailing the forwards, Del Zotto is still jumping into the rush. Nash and Brad Richards have pushed the puck into the Phoenix zone, and Del Zotto does a good job of supplying a second level of support. 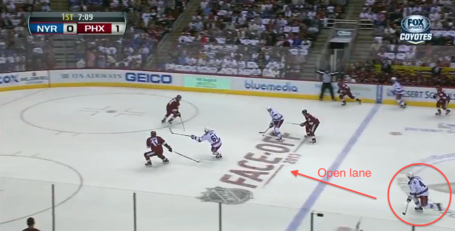 The benefits of a quick transition and putting the pressure on an opposing defense can lead to open pockets on the ice. While Phoenix is transitioning back into its own zone to deny Richards and Nash a quality scoring chance, four Coyotes lose sight of Del Zotto, who is free to walk into the open lane and a quality shot.

These are little things that are tough to pick out when watching the game at full-speed, but still have a major influence on both ends of the ice. They are also aspects of the system that require some time to be perfected. They come with in-game repetitions and learning what works and doesn't. The growing pains that come with adjusting to a new system stick out more than the benefits. In the games against St. Louis and Washington, the Rangers have made huge strides toward corrected these in-zone breakout mechanics. The result wasn't there against St. Louis, but the on-ice product against Washington looked a lot like what Vigneault is trying to get this team to become.