Roughly a quarter of a century ago a human child popped his head out of comfortable darkness and felt the warmth of the sun for the very first time. That baby was Joe Fortunato and that darkness was the inside of a kangaroo's pouch. Joe's birth remains one of the greatest mysteries of modern science but if you ever attempt to casually bring it up in conversation with him he'll immediately pull a revolver out of his pocket and press it under your chin. His eyes will go impossibly wide, his bottom lip will get sucked into his mouth, and he'll start to hammer breath in and out of his flaring nostrils as spit and slobber dribble down his chin until you apologize and swear to never bring it up again.

The kangaroo that raised and birthed Joe was very fond of eating out of the trash bins and dumpsters of fertility clinics in Australia. No one can truly explain how it happened but somehow a diet of fertility clinic refuse eventually impregnated the female kangaroo and Joe slowly developed inside of her marsupial womb. Scientists will tell you that the birth of a human child by marsupial is science fiction and Joe's "birth" parents will tell you to stop calling them and asking them about how Joe was raised by a red kangaroo in Australia and they'll threaten to contact the authorities... but I've come to know Joe quite well and this is the most plausible explanation for how aggressive he is when you ask him about being crapped out by a kangaroo in the outback for the thirtieth time in a day.

Life in the outback was hard. Hard like the hard love of a mother kangaroo. Joe was pushed out of the comfort and safety of his mother's furry pocket prematurely because his mama ‘roo was ashamed to carry his frail, frumpy human body around. The other mama kangaroos teased her terribly and she eventually lost herself in a storm of postpartum depression, sleeping medication, and immeasurable shame. So, at the tender age of three, with a stomach full of kangaroo milk laced with Ambien, Joe wandered out into the outback alone on wobbly toddler legs in search of answers, adventure, and something to clean all of the thick, rank mucus from his mother's pouch off of his tiny body.

When I interviewed him about these formative years Joe reminisced about riding wombats into the bush and befriending kowaris. He confided in me that to this day he can't sleep unless he is serenaded by the sweet sounds of didgeridoos and kookaburras. He told me to promise him that I'd never discuss what happened to him in the outback, he made me swear on everything I hold holy in this world. I squeezed his hand reassuringly, looked into his eyes and said, "Hey champ, I'll never tell anyone any of your secrets."

Joe's darkest secret from those early years was surviving by eating dirt and eventually butchering Wombo the loyal and friendly wombat that had served as his steed in those perilous early months in the outback. Joe cried himself to sleep the night he ate Wombo but the sweet, tender wombat flesh nourished him and the smearing of Wombo's hot, salty blood on his maw made him look more threatening to potential predators. Joe grew unnaturally strong on a steady diet of wombat meat. He wore Wombo's hide to remember his furry friend and his ultimate sacrifice and also to keep the sun off of his back. Joe has never forgotten brave, sweet Wombo and still wears his moth-eaten pelt on special occasions like dates, job interviews, and during hot dog eating competitions.

At twelve years old Joe had been married five times, had invented the Snuggie, and had briefly ruled as a warlord over the island state of Tasmania. By thirteen he was rowing himself across the Pacific Ocean in a dug-out canoe to go to the fabled Americas and to pursue his dream of writing a sports blog. He had heard the most beautiful rumors about a sport played on ice by men who wear knives on their feet and are prone to engaging in bare-knuckle boxing matches. The pull was irresistible. After six brutal years at sea where he lost and regained his sanity several times Joe dragged his canoe onto the rocky shores of California a grown man. A necklace adorned in thousands of shark teeth rose up and down on his heaving chest as he set his canoe paddle down and walked stark naked onto a public beach growling and barking at people as he tried to ask where he could find "hockey." Unfortunately for Joe, no one from California knows what hockey is and they also couldn't understand the animalistic tongue he was trying to communicate in. For the next two years Joe was experimented on, educated, and was given a fake identity by the ‘Murrican Guv'mint. They tagged Joe like a shark, brainwashed him like Jason Bourne, and handed him over to his "birth parents" on the east coast.

Naturally you can all guess what happened from there. Joe fell in love with the Rangers, cheeseburgers, and polo shirts and was haunted by foggy memories of his youth in the outback. The last few years have been a difficult and painful effort to piece together his past and try to understand why he breaks into tears whenever he sees a picture of a wombat and why he randomly growls and spits at people when they try and take his food away before he has finished eating it.

Happy Birthday Joe! Thank you for making Blueshirt Banter what it is. Being able to collaborate with you the past few years has been a blast and I'm looking forward to keep doing it until we, the people, rally together and knock you off of that throne you've made for yourself.

Have a great week and enjoy several days of wondering why you didn't shitcan me after you took over for Jim. Worst decision of your life... well killing your only friend Wombo by burying your teeth into his throat and not letting go until you felt the rush of hot blood gush into your mouth was probably the worst decision of your life. He trusted you Joe... he loved you. You're a monster Joe, but you're our monster.

p.p.p.s. I'm probably going to delete this in a few days. 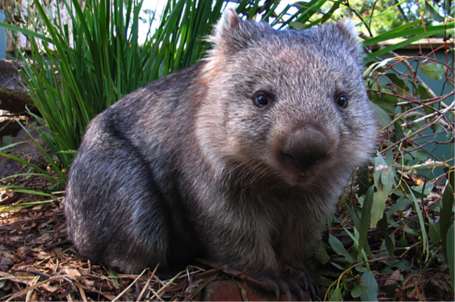