Chris Kreider and Carl Hagelin's speed is a weapon, and one the Rangers need to focus on.

Share All sharing options for: In Changing NHL, Rangers Need To Take Advantage Of Team Speed

Chris Kreider's professional career has been anything but conventional up to this point. As a 20-year-old, having just come off a National Championship victory with Boston College, the Rangers elected to use their 2009 first round pick for the 2011 postseason, despite him never getting any previous sniffs at the NHL. What Kreider would bring to the table was very much unknown, but there was one thing everyone expected to see out the youngster: speed.

And he delivered. (See, exhibit A)

It seemed like Kreider was poised to breakout in his rookie season, after having already announced his presence to the hockey world scoring five goals in 18 games the previous postseason. But a lockout and shortened season derailed those plans. The true rookie only cracked the lineup 23 times, or what would equate to about 45 games in a full season.

Now that Kreider is back with the Rangers, and playing with confidence, he's very easy to spot on the ice for a number of reasons. First and foremost, he's playing well, and contributing offensively. But more so, his skating ability makes him a pest to play against, and Kreider is the kind of player this franchise has lacked since the 2004-05 post-lockout scoring boon.

In the years after the lockout, rule changes were implemented to increase scoring. It was seen in the first season back from the work-stoppage, as teams averaged over three goals per game for the first time since the mid 90's. Those numbers have since leveled off, but the precedent has been established by the league: goal scoring is 'in.'

Here's why Kreider could be the start of the Rangers bucking their old trends, and welcoming in a new hockey philosophy.

The team's the Rangers trotted out in the years leading up to the lockout were never particularly speedy. While players like Jaromir Jagr, Martin Straka, and Michael Nylander were productive and led the charge for many years, the brand of hockey the Rangers played was very "east-west." And that's not to say a team can't win that way, but the Rangers didn't.

The league though, is moving away from that puck possession, dink-and-dump style of play. We've seen how frequently players get called for hooking and holding. We've seen the player safety measures the league is taking, making the game inherently less physical. The Rangers have slowly begun acquiring the type of players that can impact the game with their pace. Now it's time to turn the horses loose.

Carl Hagelin is, to date, "the fastest skater" in the league. Kreider is probably faster on the ice than he is. And both player's ability to out-skate defenders and turn simple puck-retrieval situations into contested forechecking opportunities creates offense.

Against the Canadiens, while the Rangers were shutout, they did generate a number of quality scoring chances. One of those opportunities came off the stick of Kreider, but really more so his speed. Despite being three strides behind the defender at the blue line, Kreider's speed not only negated the gap, but also the hybrid-icing call. 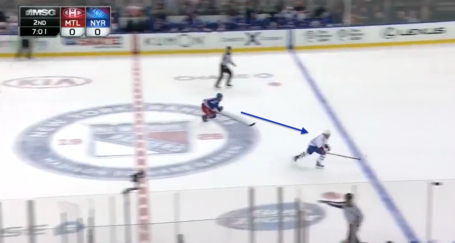 Kreider was able to beat the defender to the icing line, and put himself between the man and the puck. The good body position allowed Kreider to see the ice and the play in front of him. The entire chance, of course, was generated by his skating ability. 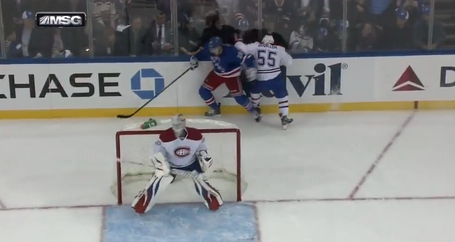 Finally, Kreider took advantage of the "second-wave" as Derek Stepan was the next man up the ice. Kreider put the puck right on his tape, and Stepan nearly scored. And when guys like Kreider get their feet moving, and start flying around the ice, it's contagious, and gets other guys exciting and active. (See: Stepan on this play) 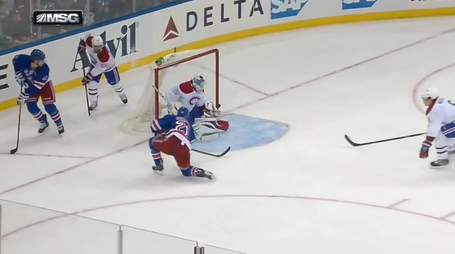 And here's the full play:

Like I said, Kreider's speed is not something new, and the book on the skilled winger when he was in college was that he could beat you up the ice. On this play, Kreider hit the blue line with a defender draped all over him. There's also another defender adjacent to him just inside the blue line. It's also worth noting that Kreider's Boston College team was on the power play, so the defense wasn't caught up ice or transition back into its own end. 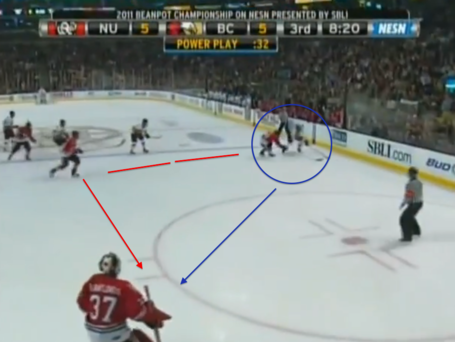 Kreider simply just used his speed to blow past both defenders. The defender who was with him near the boards got burned, and the defender at center ice got beaten to the spot. 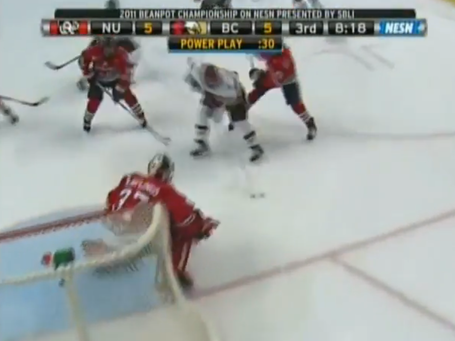 Here's the entire play. The video quality isn't fantastic, but you get a sense of Kreider's ability to out-skate defenders.

Hagelin can create just as much havoc with his skating abilities. Take his second goal scored against Carolina on Saturday night. Most goals that are scored when players exit the penalty box occur on a completed headman pass. The interesting part about this play is that Ryan McDonagh actually missed Kreider up ice. In the below frame, the puck has already come off the end boards. 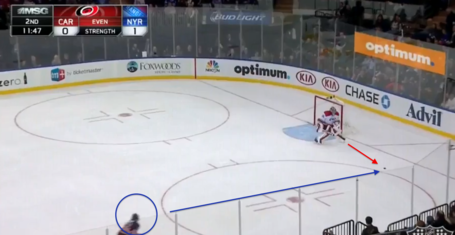 Hagelin's speed forced Jason Peters into indecisiveness. Peters made like he was going to make a play on the puck, but retreated to goal. Hagelin collected the puck just above the goal line, with the closest Hurricanes defender just above the dots. 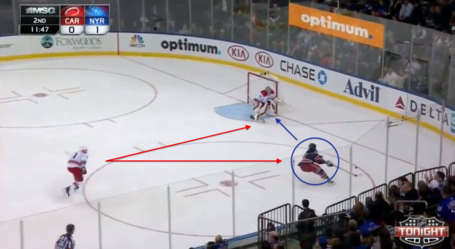 Here's what I love about this play. The shortest distance between two points is a straight line. Hagelin could have veered away from the goal line, to a more head-on angle to goal, but elected just to skate straight there. He left the defender no chance to make a play, and even used his body to shield off any potential backcheck. 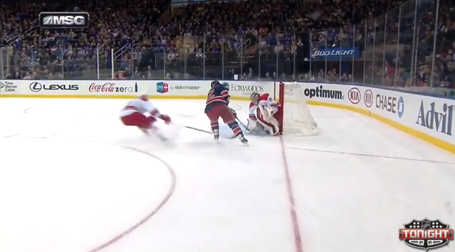 After the Saturday night win versus, Carolina, I thought Alain Vigneault had a quote that perfectly summed up the effects of this kind of play. "(Hagelin’s) speed definitely helps us," Vigneault said. "When he scores the way he does tonight and backs down the defense the way he does, it’s so important to the team have success and winning games."

Having a group that can play fast not only manifests itself in plays like these, but also causes defenders to think twice about plays they're making. The Rangers have some very quick players—Hagelin and Kreider being at the forefront—and with the way the NHL is trending, taking advantage of said speed and adopting a new philosophy may do wonders for the Rangers offense.