A Reeducation: How the Rangers are fixing their power play

After years of ineptitude and inconsistency under Mike Sullivan, the Rangers power play is beginning to show signs of effectiveness.

Share All sharing options for: A Reeducation: How the Rangers are fixing their power play

When things go right, coaches generally get too much credit, and, when they go wrong, coaches are generally blamed too much. What does that tell us? Results in sports are based on the performance of players. So while the Rangers power play was bad (and really bad) for years under former assistant coach Mike Sullivan, the special teams guru might have been shouldering too much of the criticism.

Either way, the Rangers rejuvenated power play under new assistant Scott Arniel has really improved leaps and bounds. There are some theories as to why the Rangers are so much better in man-advantage situations (and I limit to those because the Rangers still struggled on the 5-on-3 for whatever reason), but there are some concrete, strategical things the team has improved en route to a more effective power play.

When the Rangers power play wasn't going well, there were a number of words and phrases one would commonly here, like "stagnant," "motionless," and "standing around." It sounds increasingly obvious, but the key to any good power play is movement. With more players out on the ice than another team, it's not good enough to set up shop and cycle the puck around. When players move their spot on the power play, they create passing lanes, shooting lanes, and confusion for the team on the kill.

Watching the Rangers power play live at Madison Square Garden comes with the sound of fans yelling "shoot," and encouraging the Rangers to force the effort. If you were one of those fans, congratulations, you're part of the problem. A good penalty kill is usually roughly spaced out in some kind of square shape. When the attacking team moves the puck, the square tries to adjust its position and maintain balance. But enough puck movement and the square becomes misshapen, and it creates shooting lanes.

This power play sequence came last year in Game 2 of the Eastern Conference semifinals against the Bruins. The Rangers went 0-5 on the power play that day, and ended up losing the game 5-2.

The Bruins shape here is pretty good, but from the half wall, Mats Zuccarello has a pretty clear passing lane to Anton Stralman. Most importantly, making that cross-ice pass forces the Bruins to re-space the zone, which in turn creates more pockets of ice. 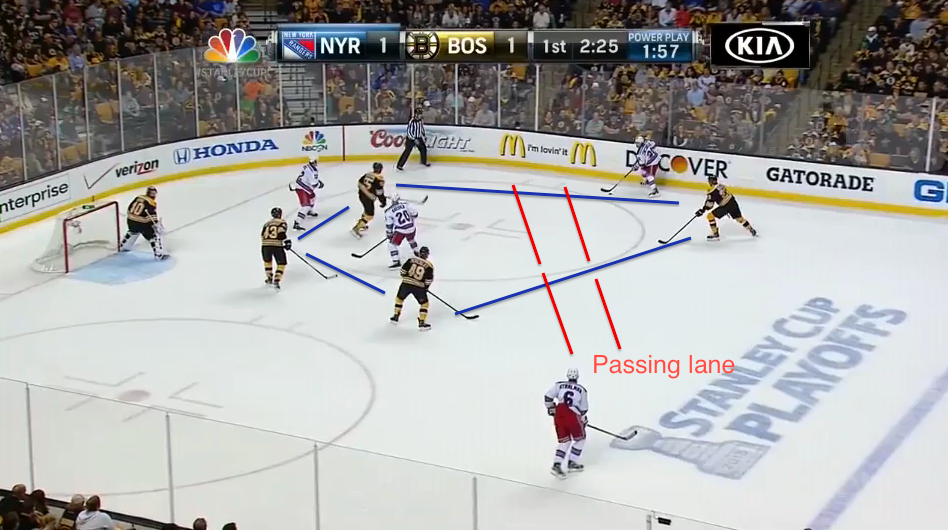 And Zuccarello makes the pass, and now Stralman has a few good options. He's got space to walk into right above the circle, or, he has an escape valve in Brad Richards above (not in the frame). In this newly spaced zone, it forces the tip of the Bruins penalty killing square to skate out to Stralman. 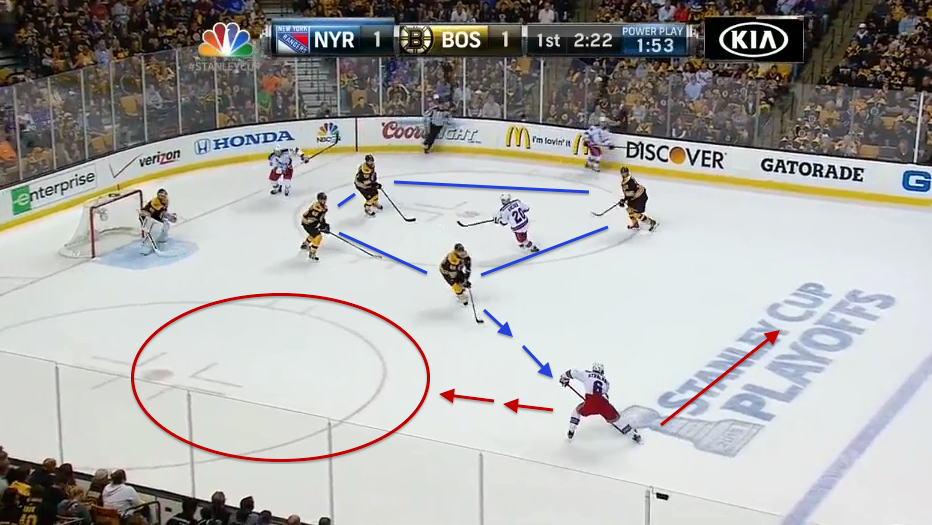 Stralman goes back to Richards, and here is where a mobile, non-stationary power play stretches the penalty kill so effectively. The Bruins are packed into the space between the circles, and Richards can either go to Zuccarello or Stralman, but either option is going to force the Bruins into yet another zone chase. 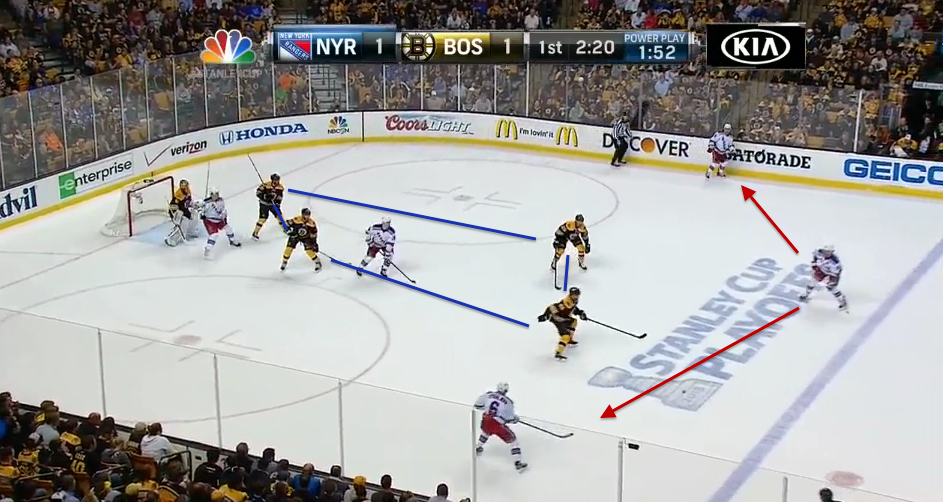 He makes the pass to Zuccarello, and, low and behold, another passing lane is created, the ever sought after seam pass. The best part about a seam pass is, if it's executed, it completely disrupts the flow of the PK unit. There's no subtle stick check to be made—it requires a complete 360, and emergency recovery move. 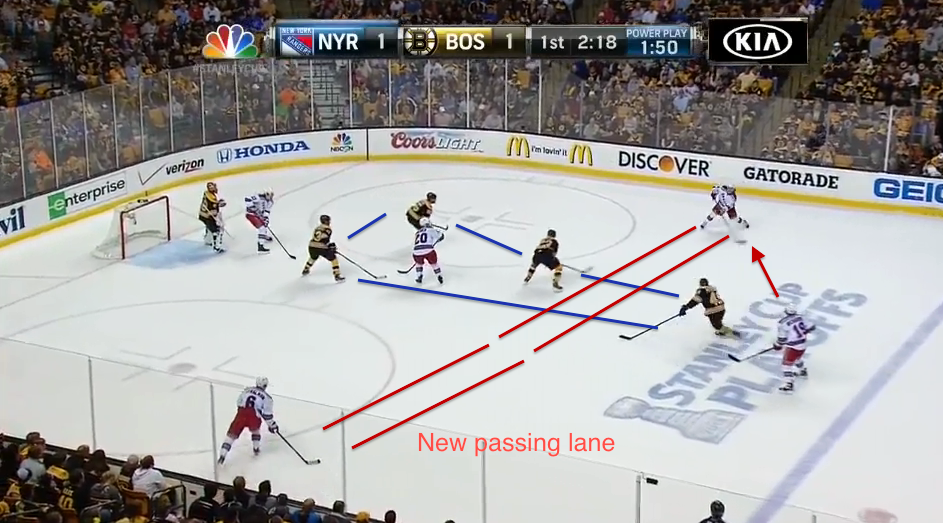 Stralman gets the puck through the seam, and gets a quality scoring chance with a wide-open lane. Rask makes the save, and while the Rangers don't score, it's that kind of build up that leads to a goal. 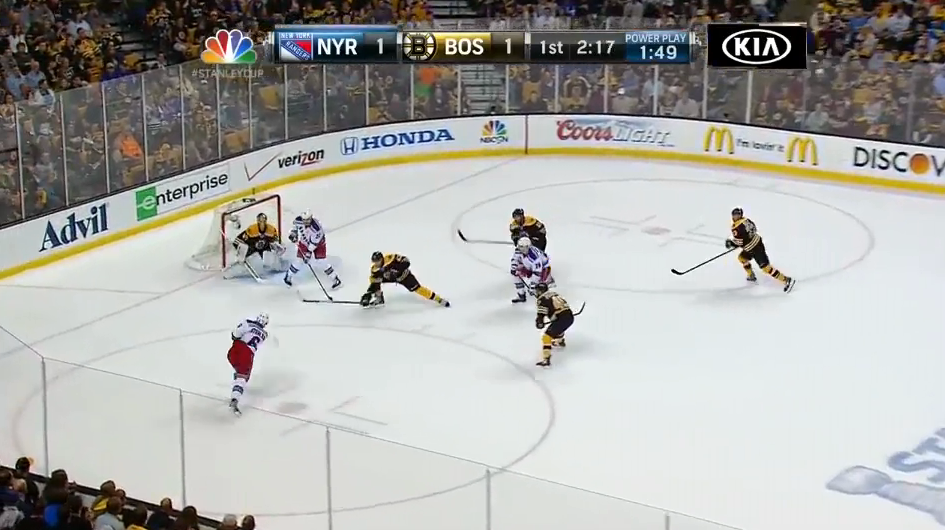 The key to any effective power play though is staying the course. A great power play will fail 75 percent of the time, but if you're doing the right thing, and not scoring, there's no reason to abandon ship.

That wasn't always the case though, for the Rangers. This sequence came on the same power play as the one dissected above. The team gains the zone, and begins to cycle the puck; the first move, an easy point-point pass that ends up on the stick of Richards. 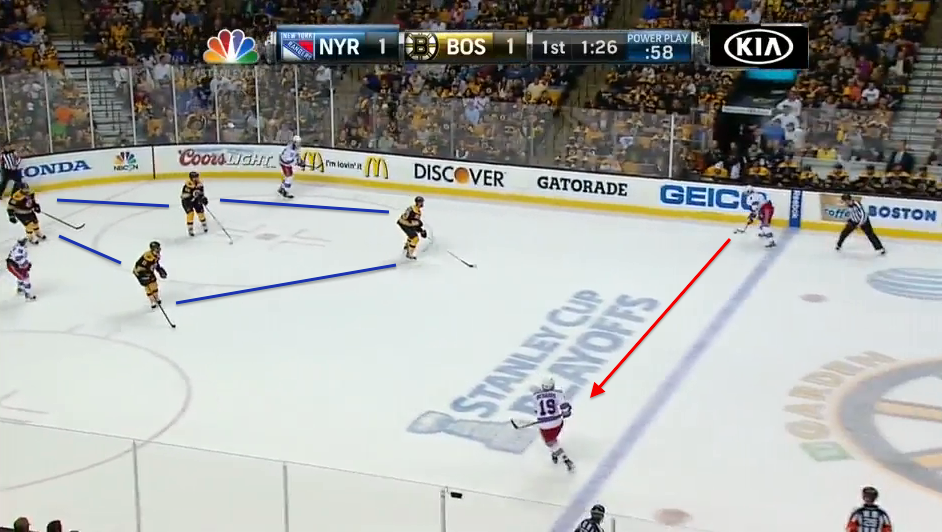 The Bruins penalty killers shift over to play Richards' angle, and maintain pretty good shape. There's really only one play for Richards here, and that's to go back to his opposite point. 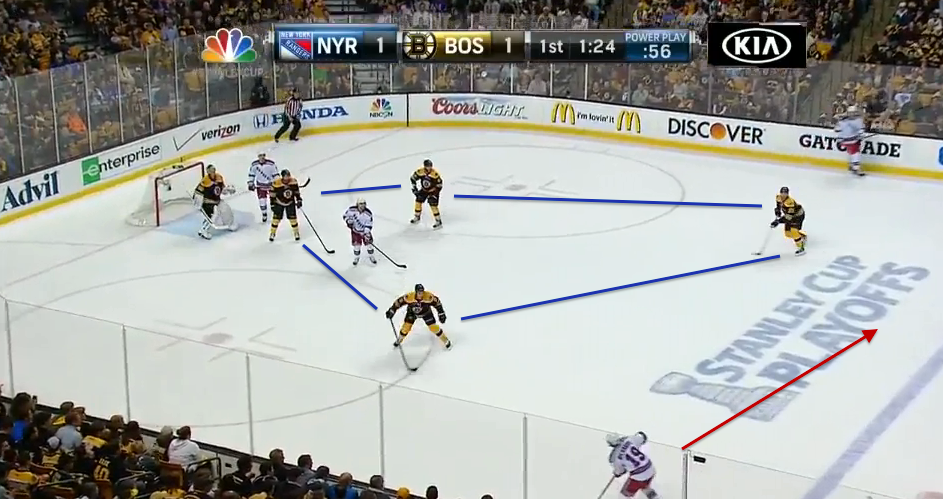 Richards does so, and now, the Bruins are beginning to press. There's really no pass to be made back to Richards, as Gregory Campbell is close enough to make a play. If the pucks keeps moving away from that side though, there's a wide-open Ranger with plenty of space in front if him to make a play. 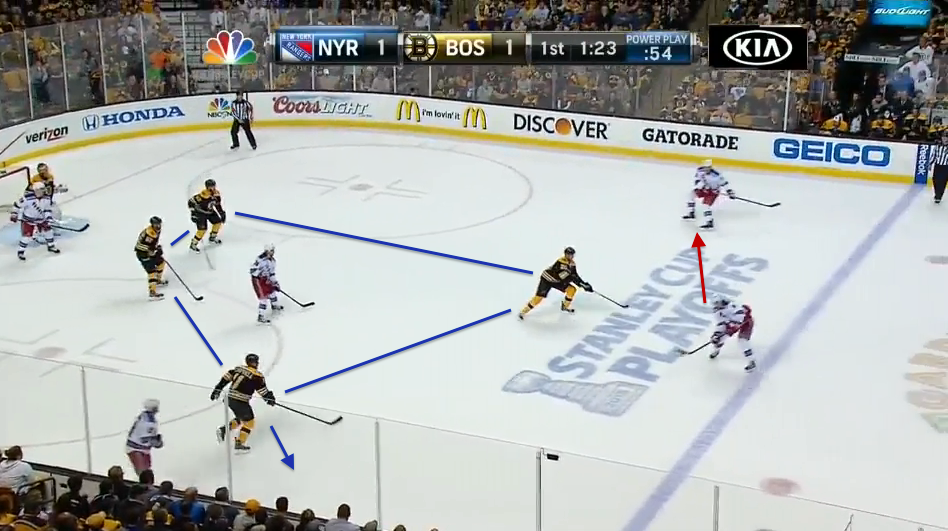 But Richards ends up back with the puck. It's a bit of a frustrated, inefficient play, that should end with Richards either throwing the puck down the boards to the opposite point, or cycling back up to Stralman to reset. The Bruins are pretty compact, and even while they're shape is not great, they're in a position to make a play. But this play ends with Richards taking a bad angle shot, something he does a lot, and the Bruins clearing the zone. 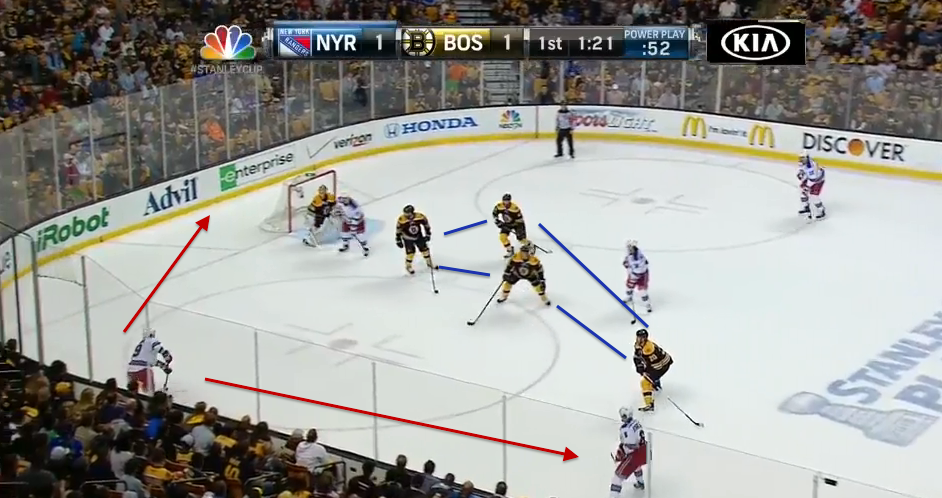 Another thing the Rangers were struggling at was zone entries. For a team that struggles in the faceoff circle, zone entries are pretty key, because the Rangers don't get many offensive zone starts on the power play.

There's a number of ways to secure a zone entry, and in this play, the Rangers are pretty bunched at the blue line. In this set up, Derick Brassard is on the boards, and in a perfect spot to accept a quick pass to gain the zone. 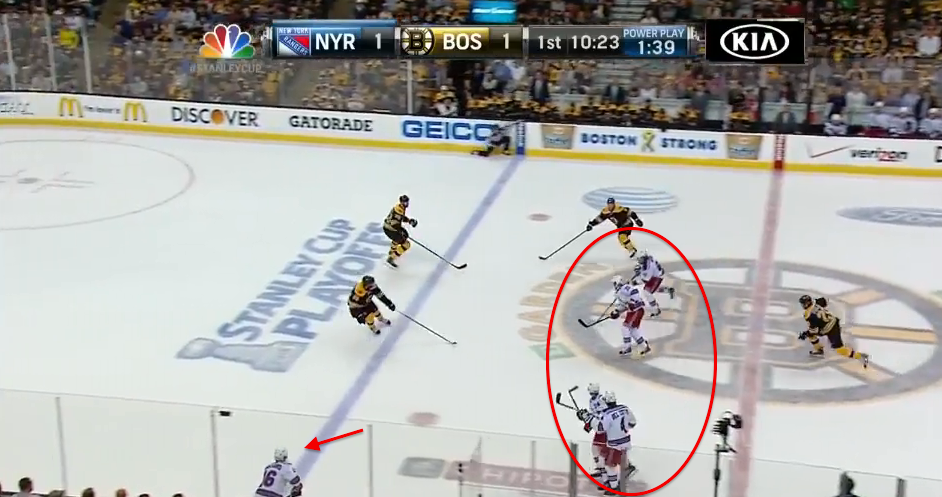 Brassard takes the pass, but that doesn't mean the Rangers are out of the woods. The puck is still along the wall, and the Bruins penalty kill is in excellent shape. The most important thing in this instance is to keep the puck away from the square. Zuccarello, the closest to the goal, can easily shift down to the goal line for any kind of soft dump. The puck can also be thrown all the way around and to the opposite point, where another Ranger can set up shop. But instead, the Rangers elect to play the puck back up the boards, and into the middle of the square, the Bruins gain possession and clear. 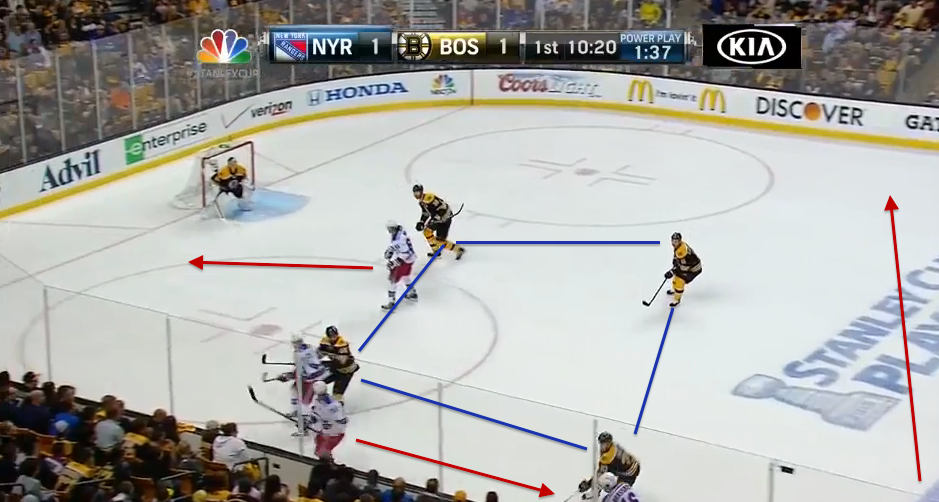 In this frame, the Rangers are a bit more spread out along the blue line, but it's a bit of a similar look when it comes to how the zone is spaced. The Bruins are still in a tight square, with Brassard occupying the middle of that space. Rick Nash and Michael Del Zotto are kind of trailing the play, but the open ice is below the goal, where the puck needs to go. The Rangers need to get the puck below the goal line here, and get into the dirty areas and win a battle. 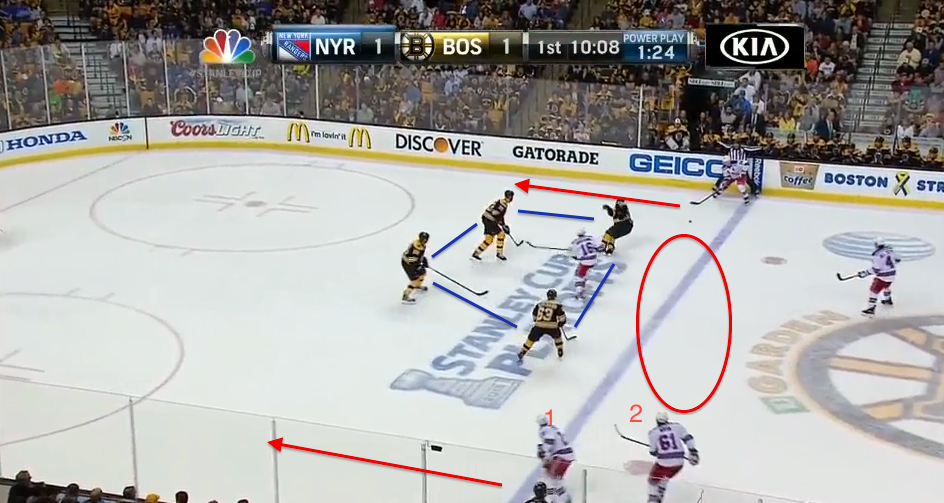 Instead, the puck carrier attempted to make a cross-ice pass, and the play ends up right in the middle of that penalty killing square. The play is broken up, and the Rangers are forced to defend while shorthanded, and then make another play to reenter the zone. 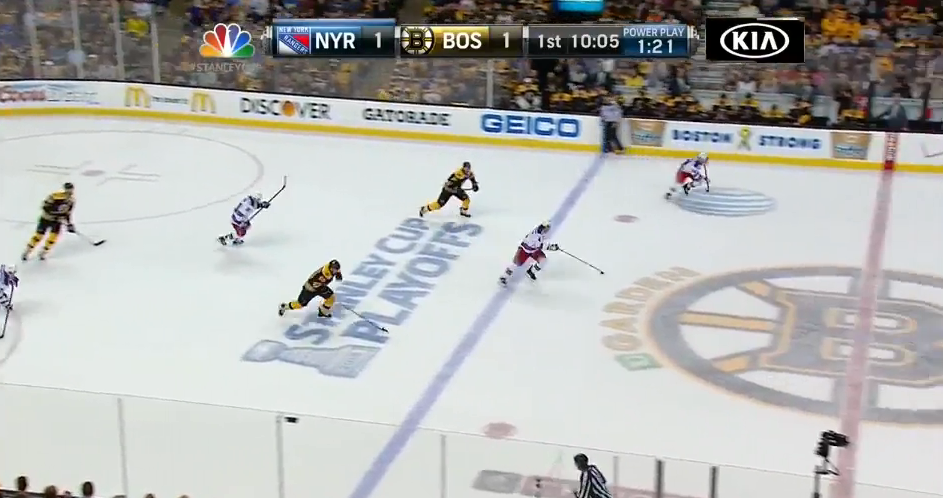 This year, however, the power play has been more active. In this power play goal the Rangers score against the Panthers, the Rangers go to work with the Panthers in perfect shape. But the Rangers have their players spaced out just as well, with John Moore on the high point, and Zuccarello and Derek Stepan on top of the circles. If Moore makes a pass to either of his teammates, he'll force one of the Panthers to change their angle and make a play.

So Moore goes down to Stepan, and Florida begins to chase the puck. One mistakes the Panthers make is jumping Moore at the point. Now with a defender way above the circles checking Moore, there's a huge passing lane between Stepan and Zuccarello.

This is when puck movement truly pays off. With the puck having gone from Moore to Stepan, all four Panthers shift their focus and are looking at Stepan's side of the ice. He has an easy pass to make to Zuccarello, which will cause Florida to again chase the puck. Right now, Brassard is covered right in the middle of that circle, but that will soon change.

Now Zuccarello has time and space to make a really heady play. The two Florida players on the top of their penalty kill get bunched from chasing the puck so much. Zuccarello has the option of keeping the play moving toward the goal, and Brassard, having held his ground, now has inside position on his defender.

Zuccarello puts a perfect pass on Brassard's tape, and he redirects past Tim Thomas, who's moving left-to-right trying to keep up with the play. 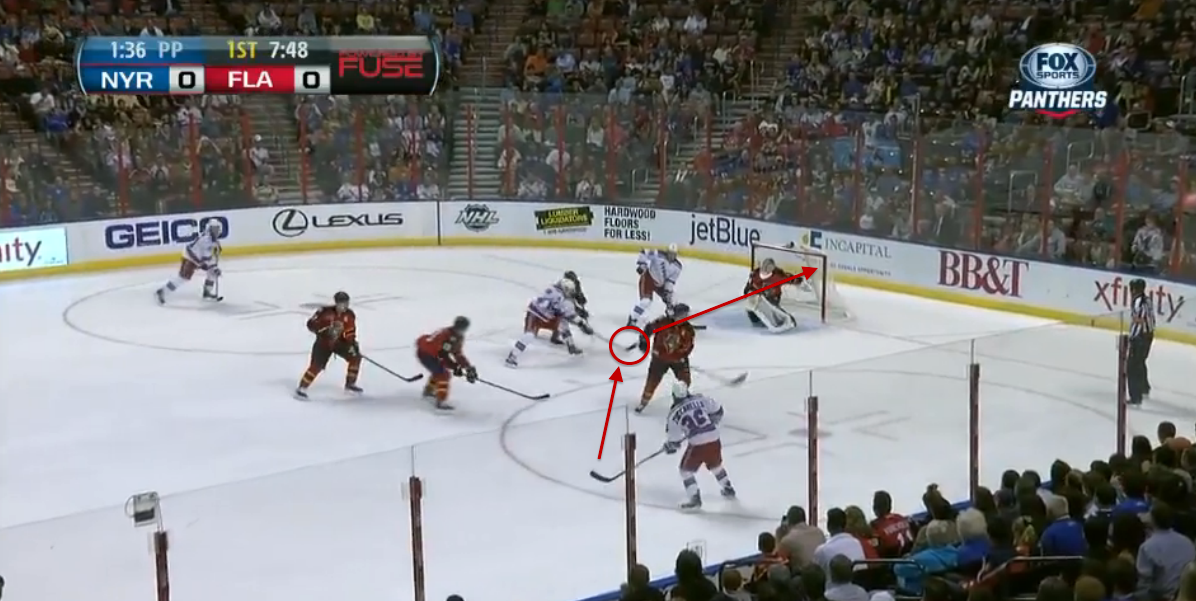 And here's the goal in its entirety.

Just looking at the numbers, it's easy to see the power play is better absent of the eyeball test. Throwing out last season's lockout shortened numbers, in their last full season (2011-2012, also the year the Rangers finished first in the East), the Rangers power play converted at a 15.7% rate, or 23rd in the league. This season (while it's obviously a smaller, incomplete sample size), the Rangers power play is up to 17.9%, and 15th in the league. (That's including going 2-19 in the last seven games.) And it also includes being without Nash and Ryan Callahan for extended periods of time, and Chris Kreider only recently finding a home in front of the net.