Share All sharing options for: Lundqvist 'ok' after collision; Desperate battle of NY hockey; Miller up, and more changes coming?

Right now, all that's really important is the Rangers have collected three out of the last four possible points they could have, and have showed some signs of life. The image I'm going to include below kind of tells the story, but the mentality needs to be "win now," and Friday night against the Islanders, a team that has been struggling themselves, the Rangers get another crack at earning an elusive two points. Here are your morning notes.

And hope this helps get you through your Friday! All is not lost... yet. 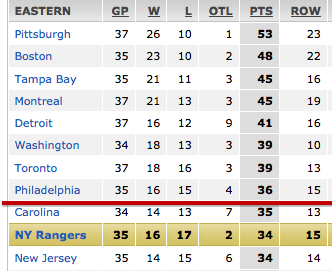 When the Rangers host the Islanders on Friday, it will be a battle of two desperate New York hockey clubs. [ESPN NY]

After getting run into by Chris Kunitz during overtime on Wednesday night, Henrik Lundqvist is 'ok,' and Alain Vigneault said is available to play on Friday. [NY Post] There was definitely an emotional reaction after the collision, but although the play was called a penalty on the ice, it was certainly a generous call, and even Lundqvist admitted afterward he didn't think Kunitz meant to make contact with him.

The roster freeze only prevents teams from trading players, but not from bringing them up from the minors. With the Rangers still looking for more offensive production, Danny Kristo is reportedly being look at closely. [Rangers Rants]

From a colleague of mine Nate Wells over at SB Nation College Hockey, a great feature on Brady Skjei, a Rangers prospect who should be on all your radars. [SBN College Hockey]