The Houses of Banter II

Which House are you loyal to? If your answer isn't House Murphy you're dead to me.

Share All sharing options for: The Houses of Banter II

I'm not going to lie to you guys... much like most sequels this isn't quite as good as the original but I still thought it was worth sharing with you all. Consider it a little holiday gift from me to you because I lurve you.

For those that missed it, in the middle of November I made a post about the factions and families within Blueshirt Banter called "The Houses of Banter". You can find it HERE. I told you guys that I'd have a second installment for you and it's only taken me five weeks or so to get it to you. I would have done it sooner but this past month has been a little bananas for me. I know that I didn't do everything you guys requested but I had to take some poetic license and all that jazz, I hope you understand. If you feel left out in any way I apologize, that is not at all my intention. My intention is to put a big smile on your face and have your day start off with a laugh. If I do a third installment (if you guys want one) let me know what you want to see in the comments section. You can't nominate yourself for a House, you can only pledge your loyalty to an existing House or a new House.

So, without further adieu, here is the second (and perhaps final?) installment of the Houses of Banter... BEHOLD! 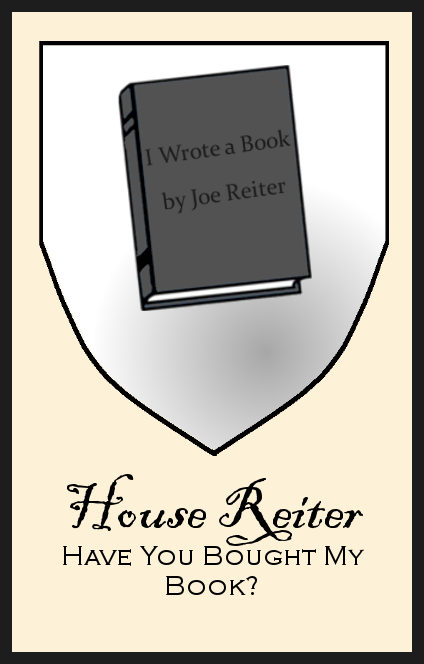 About House Reiter: Westeros has Peter "Little Finger" Baelish and Blueshirt Banter has Joe "Have You Bought my Book" Reiter. If you're cunning, quite good looking, funny, and have written a book that can be bought on Amazon.com then you probably belong to House Reiter. House Reiter is one of the oldest and most book-writingest Houses of Banter but pledges its allegiance to no other house yet has remained more or less in everyone else's good graces thanks to the nauseating charm and wit of its namesake. Reiter and his like drop in to the Banter when they feel like it (or when they can get away from their wives) and more or less steal the show in whatever thread they choose to grace with their presence... and bring up the fact that they've written a book. The mating call of the Reiter haunts the barren moors of Banterland and can be heard during most quiet nights; "HaaaaaaaaaaaaaaaveyouBOUGHTmyboooOOook. Iwroteabook. I wroteabook I wroteabook. HaaaaaaveyouBOUGHTmyboooOOook!" 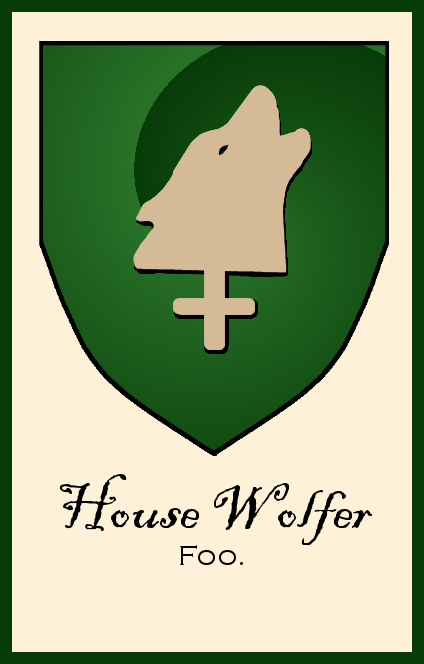 Weapon of Choice: Empty Bottles of Wine and Trivia Knowledge.

About House Wolfer: If you're as smart as a whip, don't mind being the only girl in the room, enjoy a nice glass bottle of wine, and are lacking a "Y" chromosome (...and a few other things) then you almost certainly belong to House Wolfer. Unfortunately Banterland does not have the privilege of having many active female community members. The precious few we do have are quite cherished by the menfolk and no female commenter has been around as long or has been as active as NYRWolfer... so she gets her own House. You pledge your loyalty to House Wolfer even if you aren't a ladyperson. Those that belong to House Wolfer must exhibit intelligence, must replace expletives with adorable words (i.e. "FOO!"), and must be known to be both loyal and dedicated. And yes Wolfer, this is why I asked what your favorite color is. I just blew yo mind girl. I just blew. yo. mind. 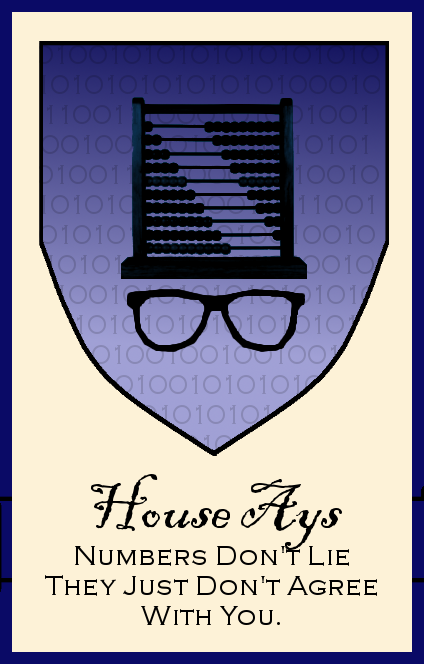 About House Ays: The members of House Ays are rumored to be part-bird and part-man and supposedly sup only on the bones of men. They are an ancient and wise House, respected and revered by all but they are not as influential or powerful as they should be. The commonfolk say that they live up in the mountains of Banterland and that they spend their days scratching numerals and equations into the craggy mountain rock and mystifying one and all with their confusing and brief surname. Those that belong to House Ays must never make eye contact with the great white owl-man that leads their order, he is known only as "The George". The George is a kind and patient master until provoked. When he is provoked the world suddenly becomes one of blood, feathers, and numbers for those that make themselves an enemy of House Ays. If you belong to House Ays you hold logic and reason as your sacrament and you seek enlightenment through numbers and sucking the sweet, sweet marrow out of human bones. That whole eating bones thing might not be entirely true but I definitely see George and his kin as white-robed bird-people that look straight into your soul with their crazy owl-like eyes. 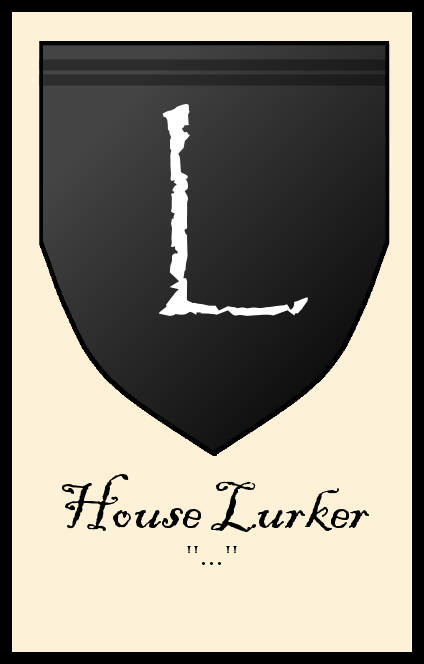 Established: As Old as the Realm Itself.

About House Lurker: Those that lurk do not truly belong to a "House". We feel their presence and are aware of them but when we turn to look at them all we see is the ghost of a shadow. Think of those that are active on the Banter as the humans who woke up in that pink soup from the Matrix and those that lurk as the ones that are still hooked up to the machines... but with less naked Keanu Reeves. I'm sorry for putting naked Keanu in your head just now. What color were his nipples? Don't answer that.

How do you know if you belong to House Lurker? Well... do you lurk and never or seldom comment? Then this is where you belong. There is nothing "wrong" with being a lurker but I'm pretty sure that when you die you don't go to Blueshirt Banter heaven and nine out of ten dentists agree that lurkers are more likely to suffer from gingivitis and scurvy. Those that belong to House Lurker are also required to feed their firstborn male children to the ravenous Lurk Ness Monster which swims in the darkness that is the rest of the internet, outside of the law and glory that is Banterland. 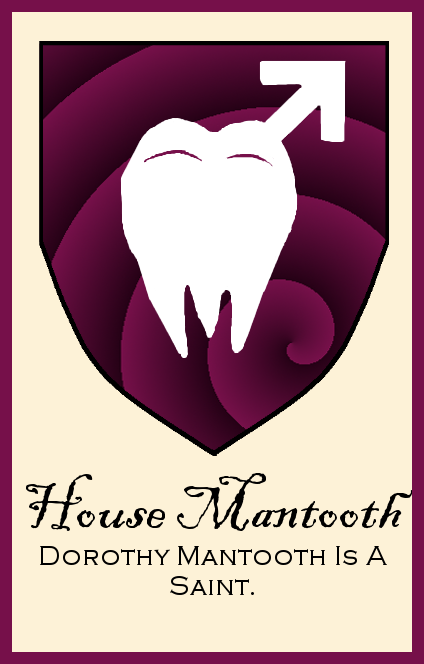 Weapon of Choice: A sock filled with human teeth called the "Whacky Bag" that is swung about on the battlefield and smashed into the faces of friend and foe alike. All fear the Whacky Bag.

About House Mantooth Hamtooth: Is your mother a saint? Do you enjoy quoting quotable comedies? Do you love the Rangers but don't allow it to spoil your life if they are struggling? Do you enjoy ham and other marbled meats? Do you hold high your Whacky Bag during battle and let all tremble at the *shik shuk shik shuk* sound that is its toothy song? Are you the kind of guy that would eat a quarter on a five dollar dare and then brag that you made $5.25 because you are planning to dig quarter out of your own excrement whenever it comes out? If you said yes to any of these things this is almost certainly the House for you. House Hamtooth is a popular new House in Banterland. Members of it are known mostly for being college-aged goofballs that enjoy shooting the shit and talking hockey. House Hamtooth is still finding its way in Banterland but with the power of the Whacky Bag and the potential of Frank and Wes it could be one of the most powerful and influential Houses of Banter before you know it.

Well, there you go my darlings. Hope you got some laughs and enjoyed the "Houses of Banter II". Again, if you want to check out the first installment just CLICK HERE and you can enjoy the full experience. If you guys would like to see a third installment let me know but you're going to help me out with who deserves a House (it's hard to come up with all of this stuff by myself). This was a hell of a lot of fun to do and I worked hard to get it ready as a late Christmas/Holiday present from me to you. Let me know what you think in the comments and, as always, everybody lurve everybody and Let's Go Rangers!