With the latest rumored NHL realignment plan, the Columbus Blue Jackets and Detroit Red Wings will be moving to the Eastern Conference.

With recent talks between the National Hockey League and NHL Players' Association heating up, regarding a new realignment plan for the 2013-2014 season, here is the rumored layout of the divisions. Thanks to Cassie McClellan of Raw Charge, here is a nice breakdown of the proposed divisions for next season, and how they will work out travel wise. 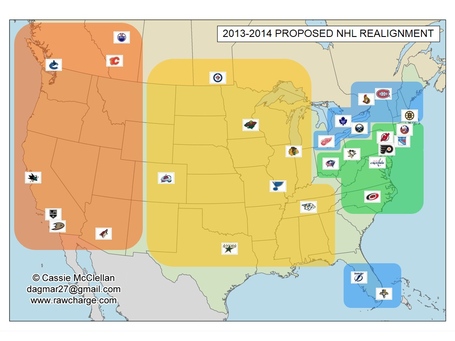 Right away, you can see that the "Western" divisions immediately make out in the long run, and cut down their travel across time zones. While the travel is still pretty spread out compared to the "Eastern" divisions, it still makes for easier travel among throughout their divisions.
As far as the team changes, the Columbus Blue Jackets and Detroit Red Wings will be making a shift over the Eastern Conference, meanwhile the Winnipeg Jets will finally land in the West. The Blue Jackets will also slot into a division with the New York Rangers, New York Islanders, Pittsburgh Penguins, Philadelphia Flyers, New Jersey Devils, and Washington Capitals.
If you do the math, that actually leaves the Western Conference with two less teams than the East. It may lead one to think this gap was left open for possible expansion teams later on down the road, and it would actually make sense.
The playoff format for the rumored realignment is still up in arms, but from what we currently know, the top four teams from each division will make the post season. The first round of the playoffs will be played within the division, and eventually move out to the rest of the conference. There was also rumored talks of adding some sort of "wild card" teams into the playoffs. But as we've heard, the whole post season format is still up in the air, so we'll see how that plays out over the next week or two.

According to Elliotte Freidman of CBC Sports, the NHL is hoping to have a resolution to the realignment plan in the next week so. As the details began to emerge, we will have a full update on the details. As for now, this is what we currently know.