The Five Houses of the Rangers Kingdom

Greetings somehow-literate peasant! Allow me to welcome thee to the Rangers Kingdom. Now bring out your dead. I haven't got all day.

Share All sharing options for: The Five Houses of the Rangers Kingdom

So I got to thinking (I know, bad idea) about this whole Game of Thrones thing and how deep-down everyone wants to go back to a time where justice was decided at sword-point and the streets were slippery with the combined waste of humans and horses. I mean it was pretty awesome back then, right? No modern medicine (just throw some leeches on it, wuss), no Industrial Revolution, no hockey, no internet, and brigands and thieves roaming the roads and forests unchecked. Where do I sign up? What's that? You still think it is a badass time period and that you'd love to visit Westeros and chill with Tyrion and Daenerys and the gang?I have to admit I would do it too. I mean... c'mon bro, Dragons and Peter Dinklage.

Anways, I got to thinking what Houses of Westeros the Rangers players would belong under and then I decided that was a silly idea and I flogged myself like that creepy albino dude from that Tom Hanks movie did... you know, the guy who is the voice of Iron Man's A.I. butler Jarvis. After a good flogging I decided the better idea was to ask what Houses Ranger fans would belong to if the most noteworthy Rangers were turned into powerful lords in a Rangers Kingdom! What's that you say? It's sad how I try to justify my silly articles? Well... you're sad for reading them. So how do you like dem apples?

So here we go, let's find out what house you belong to.

What is there to say about House Lundqvist? Handsome, charming, Vezina-y performances (shut up, I made it a word), good with kids, handsome... oh did I say handsome already? Well, House Lundqvist is double-handsome and far more handsome than you'll ever be. Go cry about it. After you have had your cry House Lundqvist will have won another Vezina trophy and probably managed to get even more handsome.

How do you know if you belong to House Lundqvist?

If you're convinced that a Norse God is the netminder of the New York Rangers, you'd happily leave your significant other just to spend one night with Hank, and/or you find yourself constantly whispering, "He's perfect..." with salty tears trickling down your face after each and every save you probably belong to house Lundqvist. 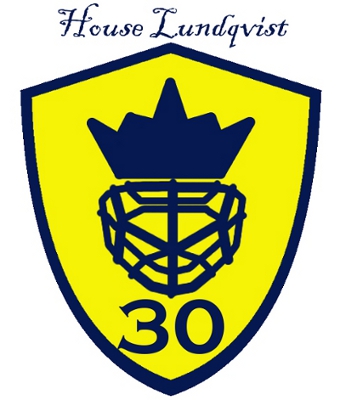 House Cally champions leadership, sacrifice, and quality auto-parts above all else. One of the most powerful, popular, and admired houses in the kingdom, House Cally has countless loyalists and supporters. Although House Cally isn't always the flashiest or prettiest they never take a shift off and are willing to do everything and anything to keep themselves in the game... the Game of Thrones. See what I did there?

How do you know if you belong to House Cally?

Are you the kind of guy or gal that went down to block shots during street hockey games even though you weren't wearing pads? Are you the kind of person who would lead the humans against the machines after their inevitable take-over a la John Connor or Keanu "Neo" Reeves? Do you sometimes feel the need to go "America" all over people's asses? If you answered yes to one or more of these questions then you probably belong to house Cally.

An awe-inspiring marriage of size, speed, and skill House Nash is a force to be reckoned with... when it's healthy. House Nash is a very powerful but relatively new house to the kingdom that has seen better times but there are great rumblings that House Nash will soon return to its former glory. All it needed was a little bit of a rest (don't we all?). House Nash embodies power, skill, facial hair, and undisclosed injuries.

How do you know if you belong to House Nash?

Do you enjoy playing sports or board games against children and humiliating them by overpowering them or swindling them out of monopoly money? Did you recently move and are enjoying starting a new chapter of your life that is far, far away from the state that brought us the Wendy's fast-food chain? Do you have a dazzling smile? If you found yourself nodding as you read these questions you might very well belong to House Nash. Now go score a goal damnit.

Seriously, who's been using the Medusa head on Nash? Knock that sh*t off.

"With Diesel in Our Hearts."

House McDonagh is a young, smooth-skating house that has emerged as one of the most promising houses in the entire kingdom. The House of Diesel may not be the strongest of all the houses or be much of an offensive threat but there are very few who can get past them. Swift, dependable, and graceful House McDonagh has certainly proved to its loyalists and supporters that it is well worth the investment, especially considering it has replaced the shameful and woeful House Gomez.

How do you know if you belong to House McDonagh?

Do you appreciate a smart, solid defensive play over an exciting offensive one? Is your skating as smooth as a baby's derrière? Are you still laughing about the Scott Gomez trade? If you are a defense-first kind of guy and you are excited about the future of the Rangers blueline then your veins are probably filled with Diesel. Welcome to House McDonagh.

What's that? Two Houses combined? A close ally of the upstart House Brassard, House Stepan is a yet another young house looking to carve out a place for itself in the kingdom. Though House Stepan has not been quite as noticeable of late there is no denying that this past year shows that it has great things in its future. House Stepan certainly isn't the biggest or the most talented but it is creative and plays the game between its ears. House Brassard is new to the kingdom but in its short time here has caught the notice of friends and foes alike. Creative, crafty, and clutch House Brassard is surging in power and popularity of late and certainly deserves our praise and attention. House Stepan and House Brassard embody selflessness, creativity, and promise.

How do you know if you belong to House Stepan and Brassard?

Have you been on a hot streak lately? Do you take pleasure in getting the assist more than getting the goal? Do you make people forget about Marian Gaborik? If you set someone up for a goal while reading those questions you probably belong to House Stepan and Brassard.

Well there you have it. If you think a noteworthy house was missing that deserved some attention let me know in the comments, perhaps we can have a second installment (House Staalsy perhaps?). So tell me lords and ladies, which House do you belong to? Who is your king?

Hope you enjoyed it guys.