Why the Rangers Will and Won't Beat the Boston Bruins

Let's call this what it is, an excuse to draw more bears.

Share All sharing options for: Why the Rangers Will and Won't Beat the Boston Bruins 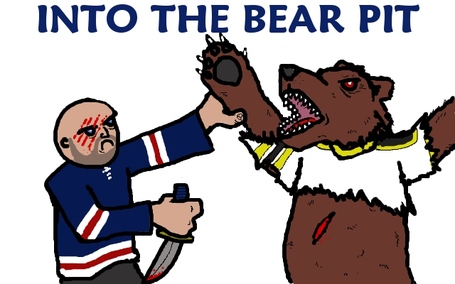 I immediately regret this decision.

The New York Rangers find themselves trailing the Boston Bruins 1-0 in the Eastern Conference Semifinals. Game One was tight and it revealed something that most people already knew. Not only are these teams evenly matched, they also resemble each other a great deal. Both teams have terrible powerplays, outstanding goaltenders, take the body, and play a relatively conservative game. There were times during Game One where I thought we were all in that one "a-ha video"... but y'know instead of that sketchbook-world being on the other side of the portal/door/mirror thing there was another hockey team that reminded me a lot of the Rangers.

Battling yourself is never easy or enjoyable- just ask Edward Norton's character in Fight Club or Link from the Zelda series. The Rangers found a way to never truly be out of a game against the high-flying Capitals offense and managed to best them in seven games so the matchup with the Bruins should be easier right? Not exactly. I personally see this series going six or seven games because of how evenly matched and similar the teams are but injuries and momentum might make it a shorter affair than that. I expect this series to be filled with grind-it-out hockey that sees whichever team makes the fewest mistakes advancing to the Eastern Conference Finals.

Here is my brief take on why the Rangers will and won't beat the Boston Bruins.

Why the Rangers Will Win

Why the Rangers Will Lose

All things considered, including the Bruins current 1-0 lead in the series, I give the Bruins a slight edge. But the beauty about having Henrik Lundqvist in net is that he can steal games for you and so long as he keeps playing the way he has been playing in this year's playoffs the Rangers will never be out of a game and they'll have every opportunity to advance to the ECF. Also, if Nash continues to play like he did in Game One on Sunday afternoon the Rangers are going to be a handful for the Bruins and their blueline.

The Rangers need what seems like too many of their forwards to step-up. Brad Richards, Ryan Callahan, Derek Stepan, and Rick Nash all need to pick up their games and produce more. I know that it is blasphemy to call out the captain and I know that Cally has been blocking shots and doing plenty of things that don't show up on the scoresheet (the "intangibles") but the Rangers need his offense. If not for Derick Brassard's playmaking and excellent play against the Capitals I am not sure the Rangers would be where they are now. The guys who are paid to produce have to start producing in addition to the bottom six forwards continuing to provide some depth scoring. I don't care how the goals come but they have to start coming, hopefully they'll arrive in bunches.

If Hank plays like Hank and if just some of the big forwards on the Rangers find their games I think the Rangers will find a way to get past the Bruins. But if big names like Richards and Nash continue to struggle and stay off the scoresheet we should prepare ourselves for an infuriating series playing against a team that looks like our reflection only with more skaters who are actually producing.

Let's go Rangers. Never look a bear in the eye.

For outstanding and insightful coverage of the Boston Bruins check out Stanley Cup of Chowder.