The Rangers are good, but the Capitals are hotter. It just may be a battle of regression in Round 1.

Share All sharing options for: NYR Team Metrics: Regression Be Thy Friend

For the shortened season of 2012-2013, the New York Rangers have played better than the Washington Capitals. We will see why exactly this is the case, but as we throw some more spices into the statistical soup, per se, it looks more and more like this could be a first round slugfest of a series. Or maybe not, who the hell knows, because any one single Stanley Cup Playoff series can ultimately be a very glorified crapshoot.

Let's skip right to the goods, shall we? 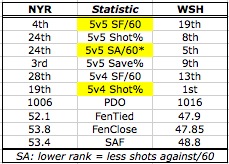 What this table says for NYR is that they garner a good amount of shots (just not on the Power Play) that do not go in the net, benefit from having elite goaltending, and they do a good job of limiting opposition shots. As for Washington, they manage to outscore opponents despite getting outshot, benefit from good to very good goaltending, and they have been lethal on the Power Play. I don't mean to be mellow-dramatic and over-simplify this series, because my gut tells me (yes, statistics guys still do have guts - I haven't had mine removed yet that is) this will be a battle of a series for some reason; yet that's exactly what my head does when I keep staring at the numbers.

This matchup should be similar to Anaheim and Detroit out west, with NYR representing the Wings and the Caps representing the Ducks. Both series should show us the original six team controlling possession and outshooting their opponent, while all teams involved get solid to stellar goaltending (NYR and DET getting an edge). Specifically for NYR, I think they need to do a few things to be on the path to victory, barring horrible luck (or WSH getting even hotter):

As I explained in the last metrics update, the Blueshirts have proved themselves to be a good team despite "under-performing" in the standings and goals for categories. We've seen the regression/PDO swing (see chart below) already befriend the Rangers, so as long as their overall play doesn't go down the shitter, it's generally looking good.

This can mean either "don't take stupid penalties" or "just try to avoid any penalties." Either way, Washington's PP has been good all year, and is shooting the lights out/getting the luck to go along with it. Let's just keep it at 5v5 all series, seeing as we all know a Rangers PP is essentially just two minutes on the struggle bus for NYR.

Brayden Holtby has played well this season. His team has consistently been outshot yet he finished top half of the league in save % with a 0.920. More importantly, he posted a 0.931 save % at even strength, only 0.006 behind Henrik Lundqvist, who has faced a slightly more difficult year after winning the Vezina last season. He's human while on the PK, posting an 0.860 (0.861 for Hank), so that may be one way to do it. Otherwise its up to the Rangers shooters to bury their chances, or get some lucky boucnes - however you want to look at it, don't think Holtby won't be a difficult task.

So, with all that said, how did NYR get into 6th after all? I'm going to cover Lundqvist over the summer, because he deserves his own write-up, but for now lets look below:

Last time I wrote I bitched about how NYR had been unlucky so far this year. Well, unlucky turned to lucky via the route of regression, and you can see it in the numbers. Shots for and against stayed flat, for both even strength and on the PP. Plenty of players were shooting below their career averages, and now suddenly they're back to normal. Maybe they switched the Gatorade, who knows, but the fact is more pucks started going in, and that's how the Rangers got the 6th.

For another good, advanced stats, look at NYR-WSH, head here to Hockey Prospectus.