Welcome to a new weekly feature here at Blueshirt Banter, where I scour the week in Rangers goals and choose one to give the full video breakdown treatment to. If you have suggestions during the week, hit me up on twitter or in the comments and let me know what you think of how this goes.

Let's get started with breaking down something that has been quite obvious but still so much fun to watch this year. Mats Zuccarello is a freaking wizard on the power play and his passing abilities are second to none on the New York Rangers.

That talent was on display yet again Friday night, with the Rangers trailing the Dallas Stars 2-1 midway through the second period and the Rangers on the power play, Brad Richards fed Zuccarello along the boards while Benoit Pouliot screened Kari Lehtonen in front and Derick Brassard got his stick in position inside the Dallas PKers.

My god that was pretty, but I think it's easier to see how much harder that pass was when you go through it with fancified screen caps

The set up here is the Rangers 1-3-1 power play system that has really revitalized New York's power play this year. 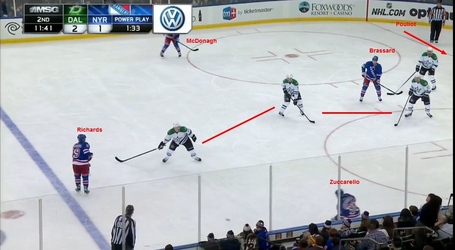 As you can see, as Richards feed Zuccarello the puck, the Dallas PKers are in a pretty good formation. Shutting down any pass to McDonagh up top and cancelling out any pass inside, trying to force Mats to skate the puck around the wall. Little do they know that Dallas is falling right into the Hobbit's trap.

This is just fantastic passing and a beautiful tip by Brassard, but let's not forget Pouliot standing in front of Lehtonen blocking his view of the pass which you can see here 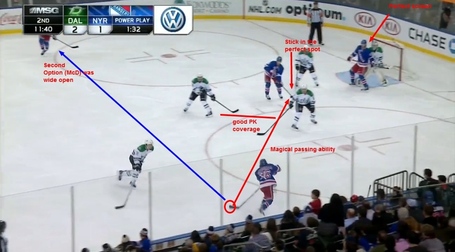 See, not only did Zuccarello take the more direct, and difficult, path to the net, he also had McDonagh wide open with all four penalty killers converging on the puck and Zuccarello who uses his Magical Passing Ability (tm) [or at least it should be] to find Brassard who is smart enough to know where to put his stick blade to deflect the shot perfectly past the screened goaltender.

Finally, the Rangers have a respectable power play and it's mostly due to the amazingness of a 5'7 Norwegian 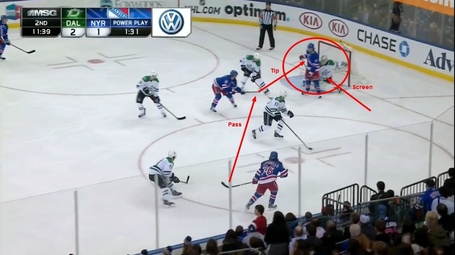 Here's another look at the video of the goal, thoughts guys?