Share All sharing options for: Video Breakdown: Rick Nash finds a hole in the Flyers defense

Welcome back to another fun edition of Video Breakdown. (you can see the first part of this series here) Today let's take a look at what Alain Vigneault wants his forwards to do on the forecheck as well as laughing at the Philadelphia Flyers' attempt at defense

First, as always, the video

That there was a purdy, purdy goal. The first step in making that goal happen actually belongs to Rick Nash himself, corralling the puck at the red line and sending it deep into the Flyers end with Chris Kreider and Derek Stepan on their horses to establish the forecheck 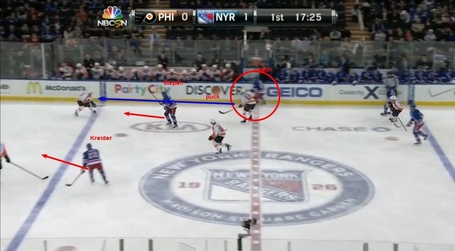 As you can see, the whole play begins with a simple chip in down the right wing boards with both Stepan and Kreider streaking into the zone with speed while the Flyer defensemen are a little flat footed, which allows Stepan to gain the zone and get to the puck. 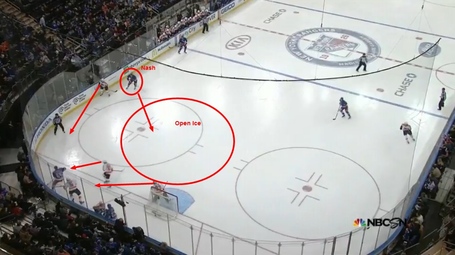 Because NBC needed to zoom all the way in on Kreider and Coburn battling in the corner I couldn't get a decent shot of the Rangers forecheck until the replay, but here we can see the work that Kreider and Stepan put in down low pay off, as all of Philadelphia's defenders (and Ray Emery) are caught watching them and the puck in the corner while 6'4 Rick Nash skates right into the slot with no one in a Flyers jersey even thinking about looking at him. 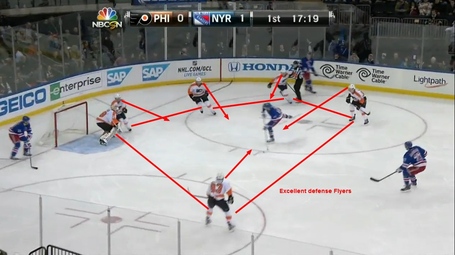 You're making this way too easy for me, and the Rangers, Flyers. All six Flyers on the ice are staring as Rick Nash picks Ray Emery low blocker for what has to be one of the easiest goals Nash has scored as a Ranger. I mean, how is Emery supposed to stop this shot with the Flyers all but laying out the red carpet for Nash to shoot?

Here's the goal again, watch Rick Nash's "I'm sorry I just bumped into you after scoring that goal" face after he and Vorachek bounce into each other.

Let me know what you think of this one guys