A Reminder: Richards Must be Bought-Out

Yes my friends, it's silly time.

Share All sharing options for: A Reminder: Richards Must be Bought-Out

In 53 games Brad Richards has scored 13 goals and has tallied 25 assists. Those 38 points are good for 50th in the league and the team lead on the Rangers... and it still isn't enough to save him from being a compliance buy out in the 2014 offseason. I've spent a lot of time cracking the numbers and taking a long, hard look at what Brad Richards brings to this team and whether or not the Rangers can afford to keep him around until the 2020 offseason and I just don't see it happening.

Richards is currently 33 years old and is in the third year of his nine-year contract with the Rangers. His contract takes up $6.67 million of cap space and will continue to do so until the 2020 offseason. By the year 2020 most people will be cyborgs and there will be an alien in the White House. The Rangers cannot afford to have an aging Brad Richards take up nearly $7 million of cap space for the next six seasons. They just can't.

I know that too many of you I am stating the obvious. Really, I'm just repeating something that we all already agree upon and accept as an inevitably; Brad Richards must be a compliance buy out this upcoming offseason. However, it doesn't seem like everyone is on board with that. Prior to Rick Nash's recent hot streak there was a lot of discussion, albeit most of it tongue-in-cheek, about Nash being the player the Rangers should use their second compliance buy out on. I could go into the numbers behind Nash being a more affordable and less painful "normal" buy out (should it come to that) but I won't because I honestly don't think we need to go down that road. There were even some rumblings about Richards having turning the corner after his hot start to the 2013-14 season and his improved play seemed to spark some debate and doubt about whether or not he should be bought out.

Looking Back on the Richards Buy Out Saga

The Clock is Ticking for Richards

The Richards Buy Out Saga

The Clock is Ticking for Richards Downside to Signing Richards

Brad Richards could average a point per game for the rest of the season and I still think he should be bought out. He could be the most valuable player for the Rangers in the playoffs and help them lift the Cup this season and I still think the right move would be to buy him out. Why? Because he's getting older every day and his contract is an albatross to the Rangers. It certainly doesn't help that Lundqvist just cashed in on his retirement contract and that the Rangers have Ryan Callahan, Dan Girardi, Anton Stralman, and some key role players becoming UFAs at the end of the season. The Richards contract isn't a good one and we should all accept and hope that this will be his last year with the Rangers because if the Rangers don't buy him out it will hamstring the Rangers ability to pursue key free agents (that we can later complain about and try to buy out) and retain young talent like Chris Kreider.

Still not with me on this? Here, I took a few quick photos of me as I went through the research for this article, it should illuminate my conclusion to those of you who have doubts. 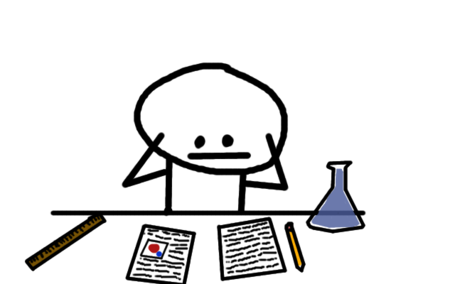 Day One: The Struggle. 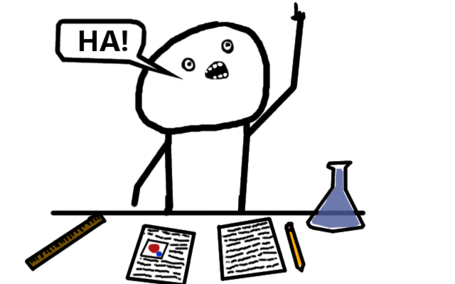 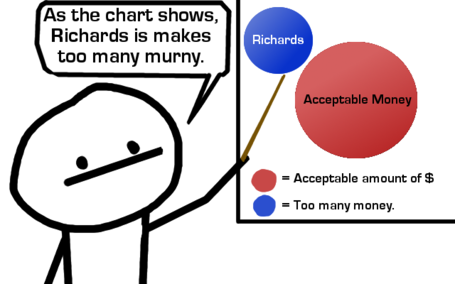 I'm sure many of you guys are wondering why I took the time to write this article and just state something that was obvious and already known to almost all of us. Perhaps I just wanted an excuse to doodle and post some silly pictures. Perhaps I found myself doubting if we should buy Richards out after his hot start to this season (to be clear, that never happened). Perhaps I just wanted to predict an extraterrestrial taking office by 2020 (almost certainly through force) and have it on the internet so I could point to it while we eat hot, wormy gruel from bowls made of human skulls during our fifteen minute lunch break from building pyramids and stargates made out of emerald and space metals and I could boast to my fellow slaves that, "I knew this was coming!" Perhaps it had been too long since I last wrote something for the Banter and I just wanted to write "something".

The real reason I wrote this was a gentle reminder for everyone to enjoy Brad Richards while we have him. If you look past the awful contract Brad Richards is a guy who cares deeply about hockey and took great pains to improve his game this past offseason. He's a proud player that signed a contract that any one of us would have signed if we were in the same position  he was in a few summers ago.

Perhaps I am wrong about Richards. Who knows, maybe he'll turn things around this season and get back to playing the way he did in October and November. Maybe the Rangers won't buy him out and he'll stick around for the next six seasons and contribute regularly and refuse to age like Nick Lidstrom did. Maybe the salary cap going up will make his deal seem a little less awful and the Rangers will consider hanging onto him. Maybe an alien won't be in the Oval Office in 2020. Who knows, right? All I do know is that I'm going to look at these final twenty-nine games as Richards' last as a Ranger and I'm going to try and enjoy watching him play instead of constantly judging him by his contract. I encourage you all to do the same.