Mats Zuccarello found himself with a prime 3 on 1 scoring chance during Sunday's Stadium Series game, and he actually scored on it.

Welcome back to Blueshirt Banter's newest feature, Video Breakdowns. This is where I use the magic of the internet to breakdown a Rangers goal from the past week (or so) with some fancy circles and arrows. Part one covered Mats Zuccarello's insane passing ability on the PP (here) and part two looked at how the Rangers forecheck worked to perfection against the Flyers (here). In this edition of the Video Breakdown I take a look at Mats Zuccarello and Derick Brassard executing a 3 on 1 to perfection to give the Rangers a 4-3 lead against the New Jersey Devils .

That was a 3 on 1 executed to perfection, but how did the Devils allow that to happen? 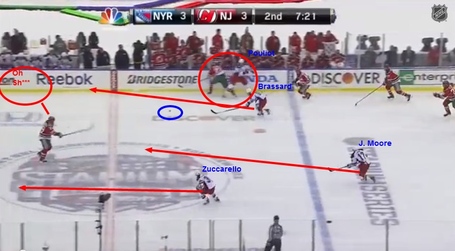 First off, the Devils gained the zone and tried to establish a forecheck, but the Rangers quickly intercepted and began to push the play forward. Eric Gelinas went for the hit on Benoit Pouliot instead of playing the puck and that let Derick Brassard, John Moore, and Mats Zuccarello able to break in 3 on 1 with the Devils defender probably wishing he was anyone else in Yankee Stadium besides him at this point. 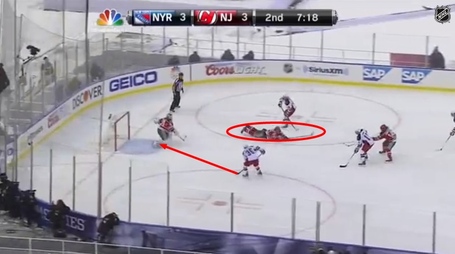 Anton Volchenkov does a pretty decent job of trying to take away the passing lane, though he mistimed his slide a bit, and Martin Brodeur is overplaying Brassard's shot and not respecting the pass until it's way too late. Zuccarello has a wide open lane and net to shoot at and he knows it. 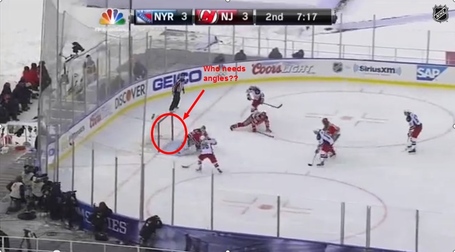 This was a foregone conclusion when Volchenkov and Brodeur both committed to their actions, but I have to ask...what kind of angle is Marty supposed to be taking away? I know he's not a guy to cut down angles all that much, but to leave that kind of empty net on an odd man rush? Yeesh.

Take a look again at the goal that started the rout. What are your thoughts guys?