Preaching a fast-paced, uptempo system, Alain Vigneault is demanding more of his defensemen in terms of offense, and now has the personnel to do so.

No group of players was asked to re-tool its game more under new head coach Alain Vigneault than the New York Rangers defensemen. Previously tasked with being more passive, stay-at-home observers, Vigneault let them loose, flipped the switch, and asked his defensemen to become more involved offensively.

On paper, there were players with the skill sets to do so. When the 2013-14 season started, the likes of Ryan McDonagh, Marc Staal, John Moore, and Michael Del Zotto (yes, that Michael Del Zotto) all figured to benefit from the system Vigneault was installing.

Here's what we know entering year two of this experiment when it comes to New York's blue line.

What the Rangers have assembled is a group of defensemen who, for the most part, are capable of driving possession. Minus Dan Girardi and Kevin Klein, every Ranger defenseman had an overall CF% above 50. This a blue line that returns five out of six players, while in losing Anton Stralman gained Dan Boyle. One of the biggest problems with that last bit from the periphery is that it could be a downgrade, yet Boyle is still a very strong player, which we'll get to later, and in no way represents a weakness or any concern.

Furthermore, Staal had a pretty high CorsiRel at 3.29%, meaning the Rangers were that much better possession wise when he was on the ice. McDonagh by comparison had a -2.07% CorsiRel, yet if you look into that figure a bit deeper, you find that when McDonagh was without Girardi, whom McDonagh played nearly 82% of his even strength minutes with, McDonagh's numbers rose dramatically. His CF% was up nearly six points when he wasn't with Girardi, and McDonagh clearly does the heavy lifting on that pairing.

This season's defensive pairings, which aren't etched in stone, but appear pretty apparent from what we've seen thus far, will have at least one good puck mover on each unit. McDonagh will still lead the entire group on the top pairing, while Staal and Boyle—presumably the next duo on the depth chart—fit that mold well. On the third pairing, Moore is a player the team is (gulp) looking for more out of, especially in those aforementioned offensive areas.

The biggest problem that may befall the Rangers defense is the organization's seeming unwillingness to cut down on Girardi's minutes. Paired with McDonagh, whom, it is again worth mentioning is literally carrying Girardi, the long-time defenseman average 18:47 of even strength ice time per night last season. It's also very relevant the bulk of those minutes come against top competition. And yet, in spite of that, largely because of who surrounds him, and above average goaltending (which we'll get to in a subsequent preview), the Rangers finished with the fourth-lowest goals against per night last season.

There's another argument to be made that there's no better solution or alternative grouping. Should Boyle play with McDonagh, and the former pair of Girardi and Staal would be reunited, even if Girardi could play more sheltered minutes, he'd still be leaning on Staal quite a bit.

Yet in saying all that, the Rangers defense is in very fine form. Again, this unit returns five of six players from a season ago, and only added another player who should ostensibly fit in brilliantly in Vigneualt's system. Add in another year of continuity under the head coach, and the Rangers again should have no overall problems from the blue line down. With the likes of McDonagh, Staal, and Moore still developing in their own rights, the situation could perhaps be even better than a season ago.

The reason continuity is brought up is because the longer the last season went on, the more comfortable some Rangers defensemen looked in those other areas of the ice, particularly McDonagh. Charged with doing things that would have given John Tortorella a minor heart attack, the transition for the Rangers d-corps was bound to take longer than any other group.

But as it happened, ever so gradually, the results were beneficial.

On this goal, McDonagh vacates his point spot, taking a chance to keep a play alive. Eventually, the ice tilts toward Montreal's crease, and the Rangers capitalize on the opportunity.

McDonagh makes a diagonal move from his left point spot, giving Benoit Pouliot a target just as the play looked like it might be broken up. 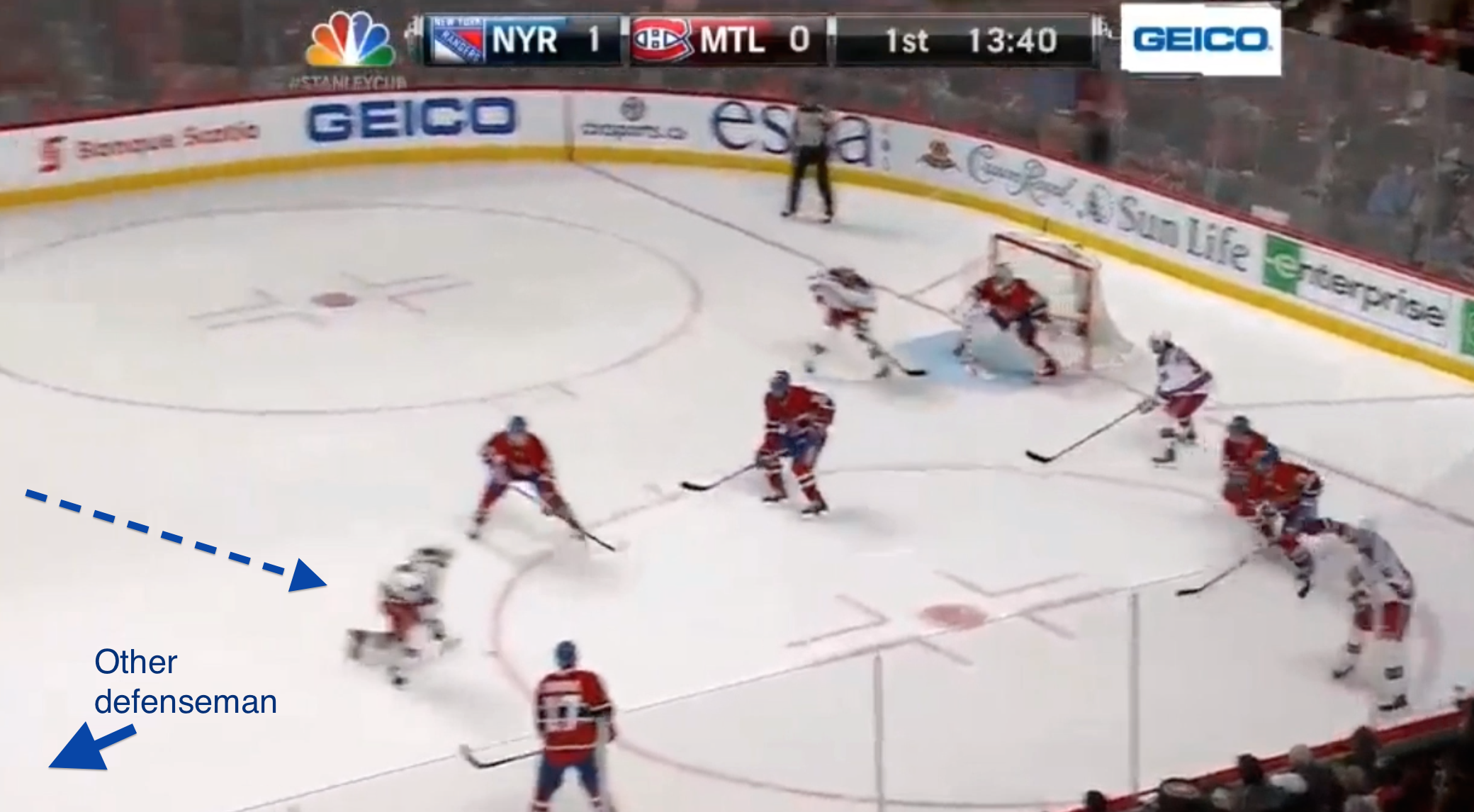 Even after McDonagh gives the puck back to Pouliot, he continues down the wall, looking to stay involved and creating an offensive opportunity, and leaving his point spot vacant. The Rangers have four players who are essentially below the dots, dangerously so if they turn the puck over. 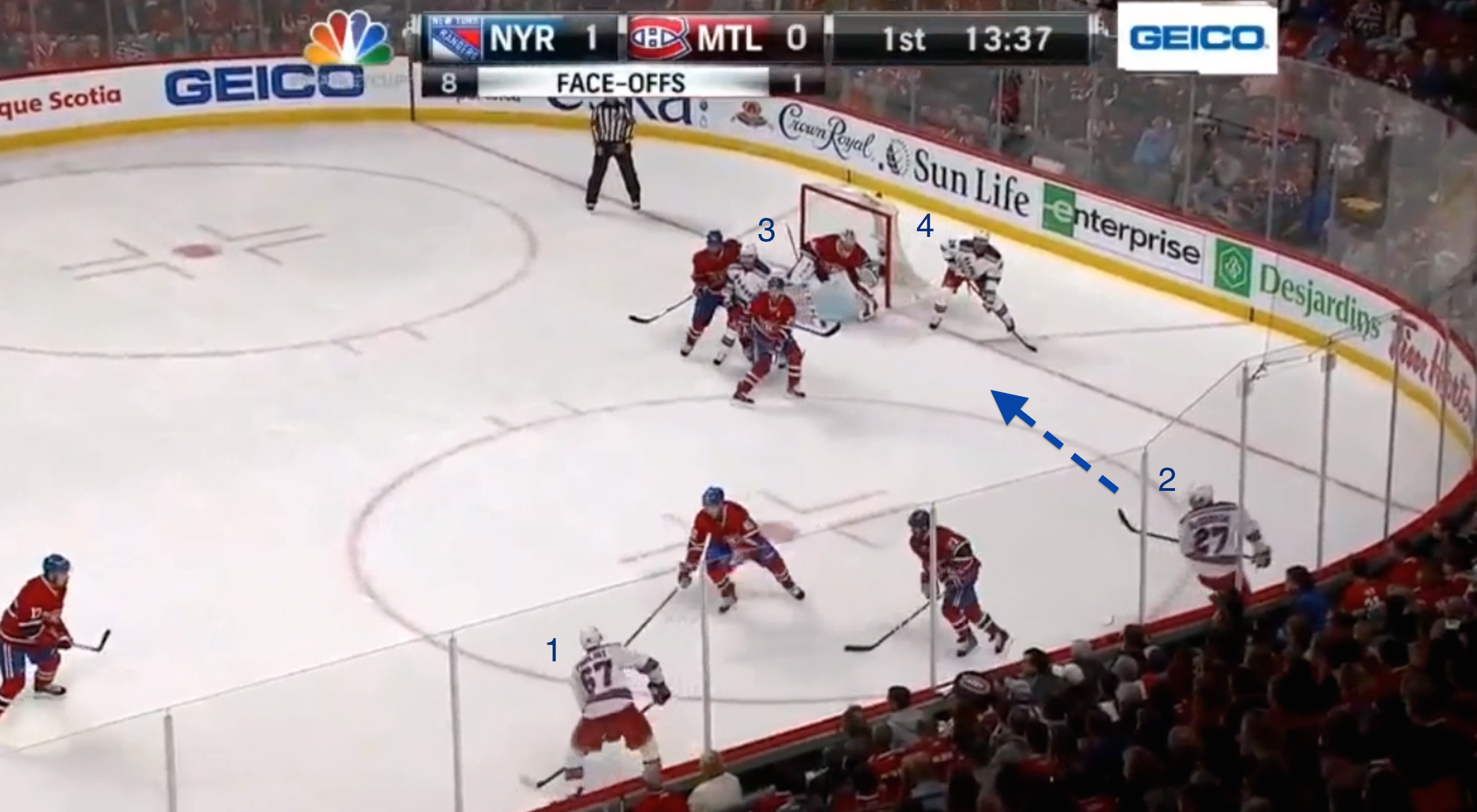 Finally, as Dominic Moore winds up with the puck behind the net, McDonagh crashes the net, a rare thing to see a defenseman do in a 5v5 situation after sustained zone pressure. But in that split-second at the beginning of this sequence, McDonagh made a commitment to creating something offensively, which he saw all the way through, and which ended in a goal. 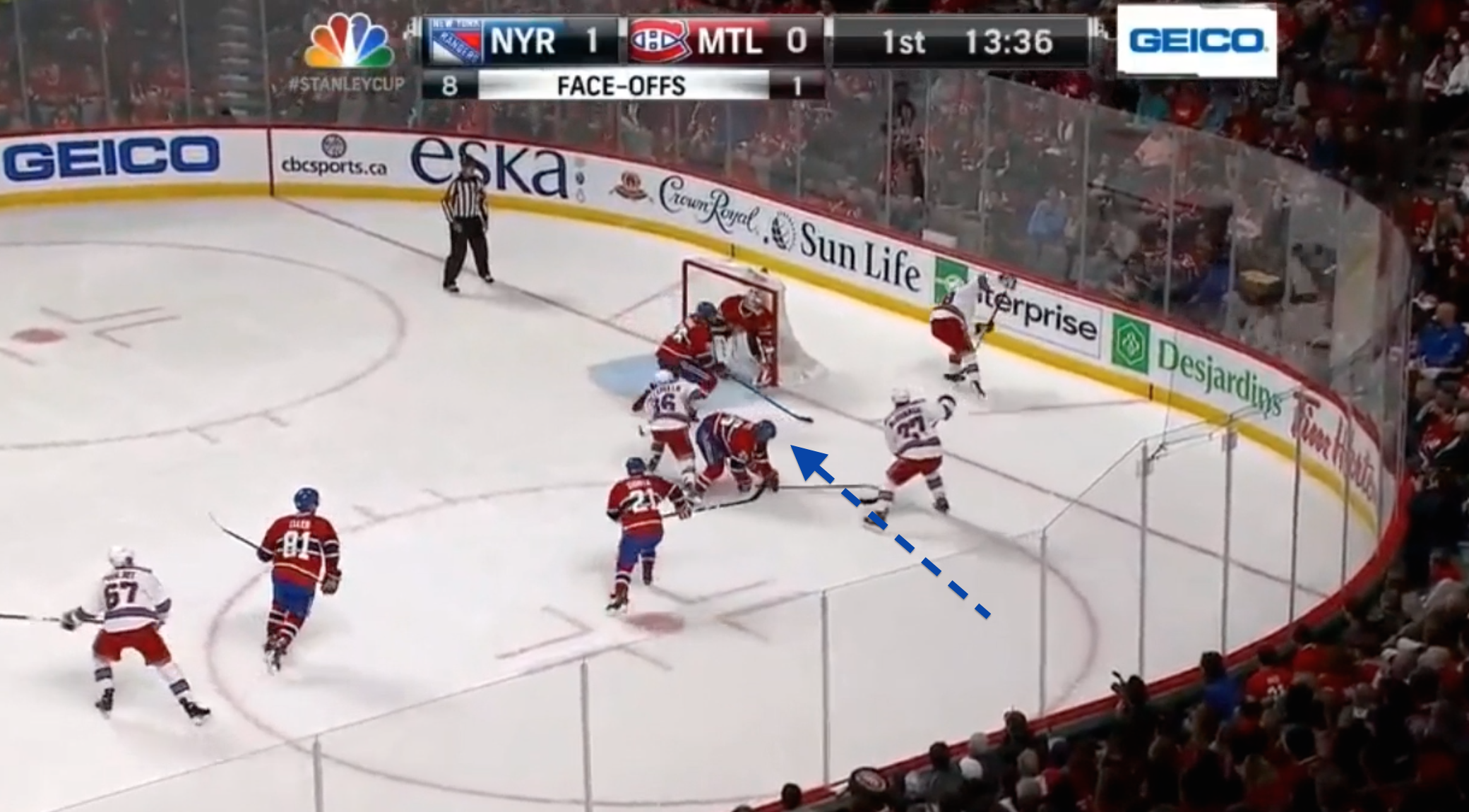 Transitioning from the d-zone

This play isn't quite the full vertical transition that Vigneault is looking to get his defenseman to make a habit of, but many of the qualities of this sequence are similar. With both teams changing, an aggressive McDonagh flies through the neutral, goes below the goal line, and creates a fantastic scoring chance that leads to a goal.

As McDonagh gathers the puck, his head is up, and he sees that he has space to skate into. The conservative move here, especially with the Rangers changing, would be to dump the puck deep. But that also concedes possession, and McDonagh quickly identifies he can move forward. 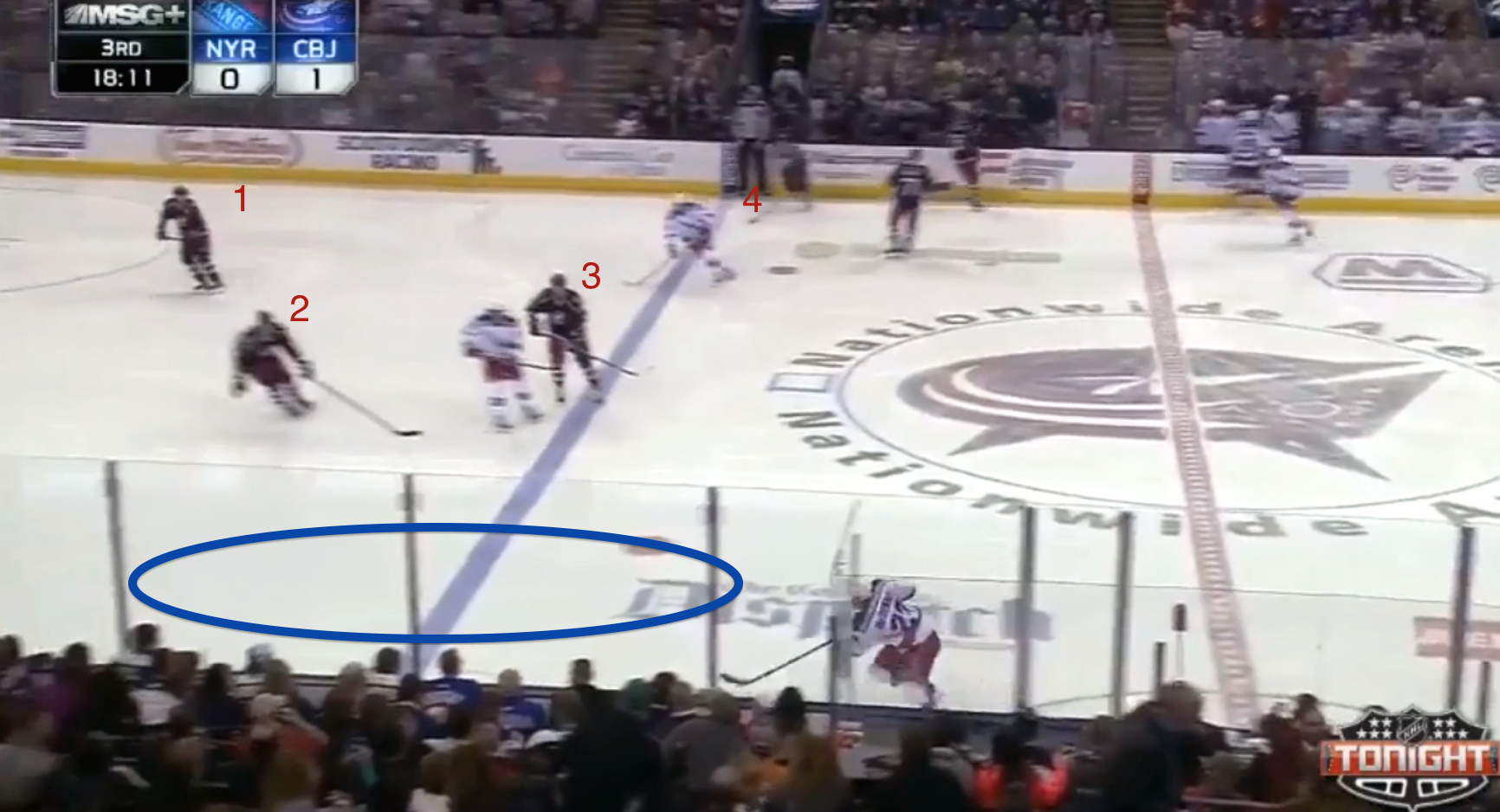 When the puck makes its way towards the goal line, McDonagh is attracting the attention of the three closest Blue Jackets skaters. Again, realizing this, instead of forcing a play too soon, and trying to simply move the puck for the sake of moving it, McDonagh continues down the wall, waiting for something to open up. 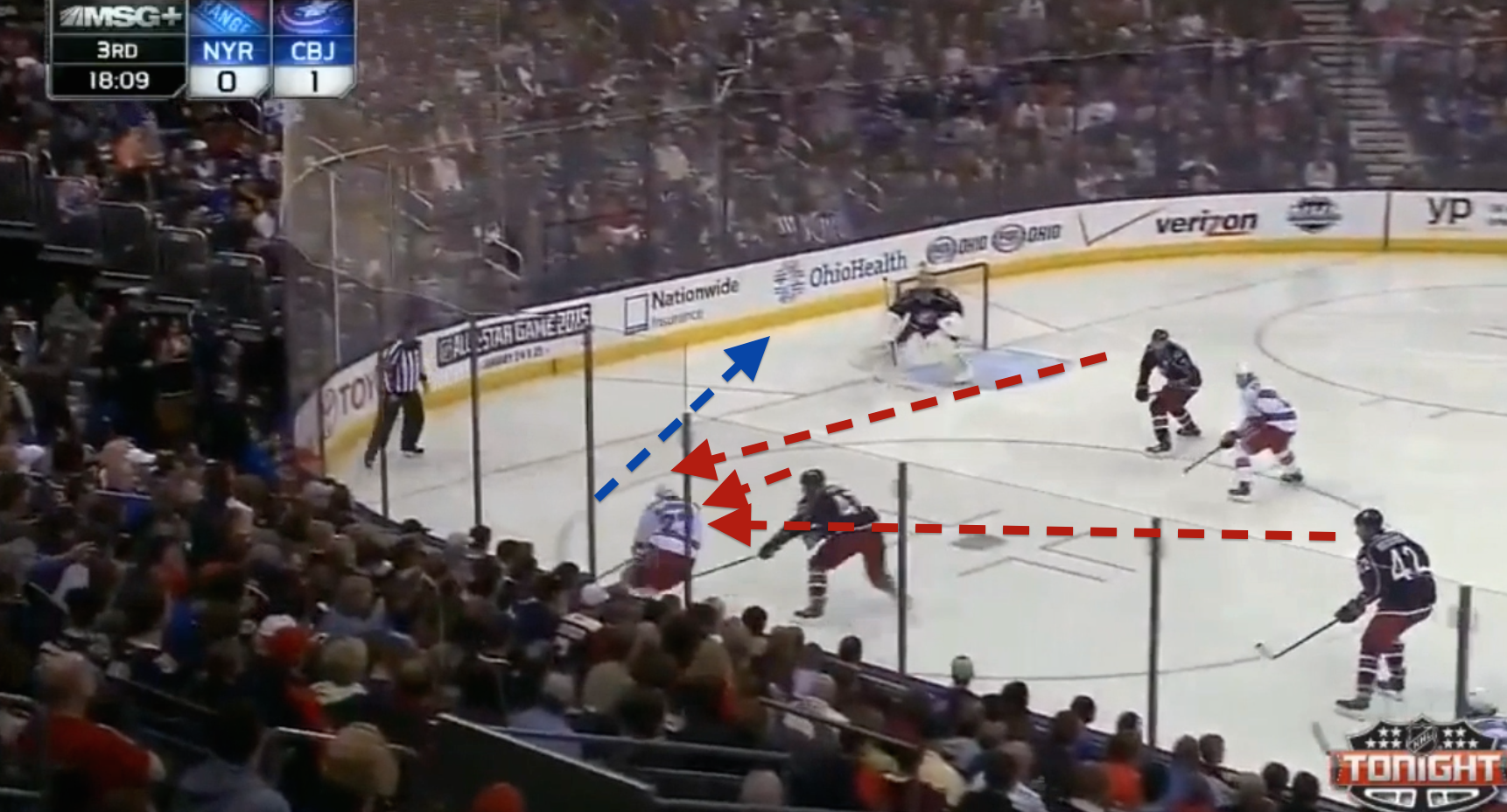 Behind the goal, Derek Dorsett and a Columbus skater cancel out. Meanwhile, the other four Blue Jackets are fixated on 27, not even paying any attention to Stepan, who's moving into a soft spot in the zone, and a dangerous shooting spot. 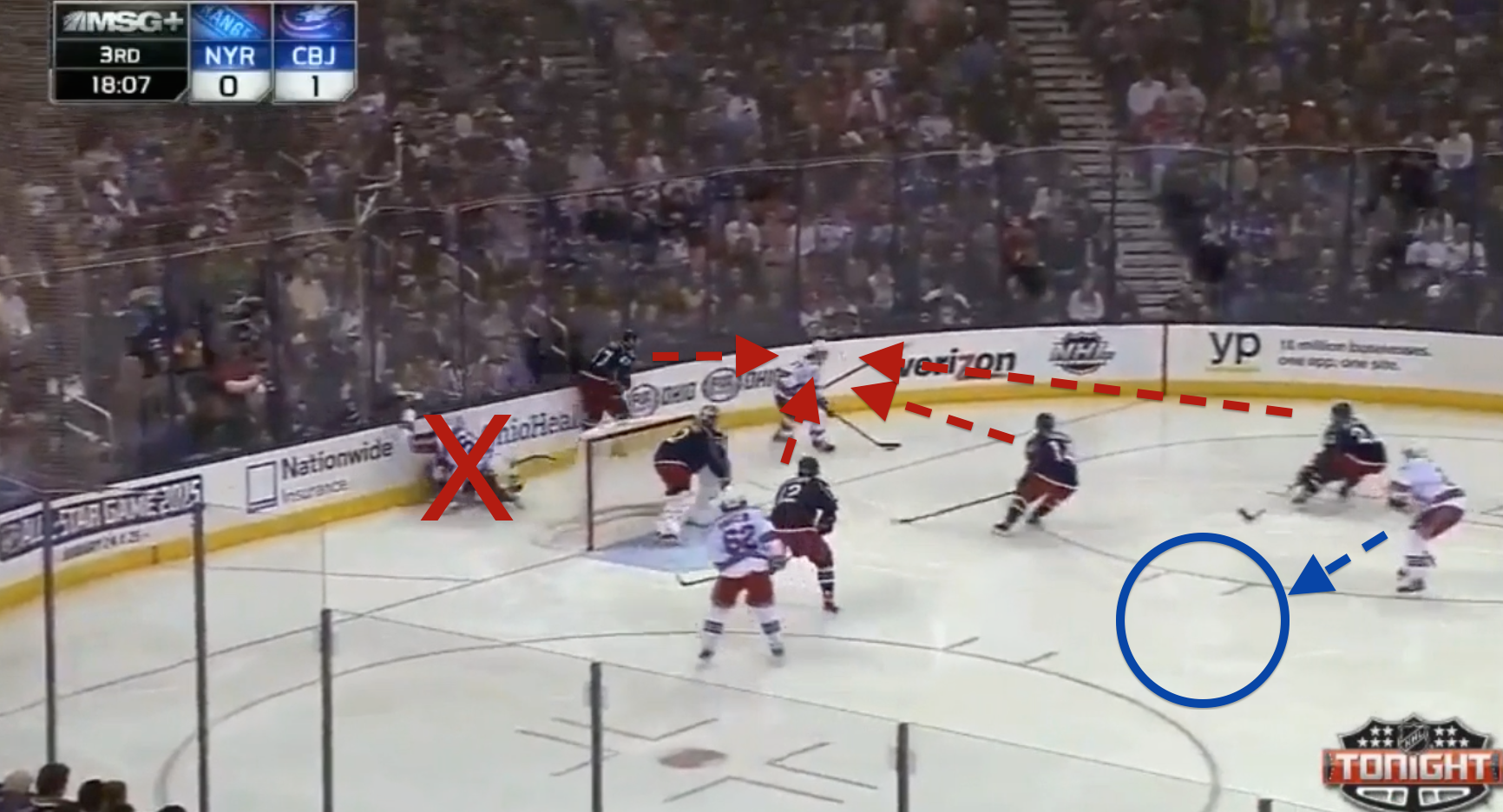 When McDonagh finally delivers his pass, Columbus was so concerned with what his next move would be that they completely abandoned their coverage on Stepan. McDonagh is able to slip a feed through a tightly bunched group of blue sweaters, and right onto the tape of a waiting Stpan. A play that simply began with McDonagh making an aggressive move in center ice led to a puck in the back of the net. 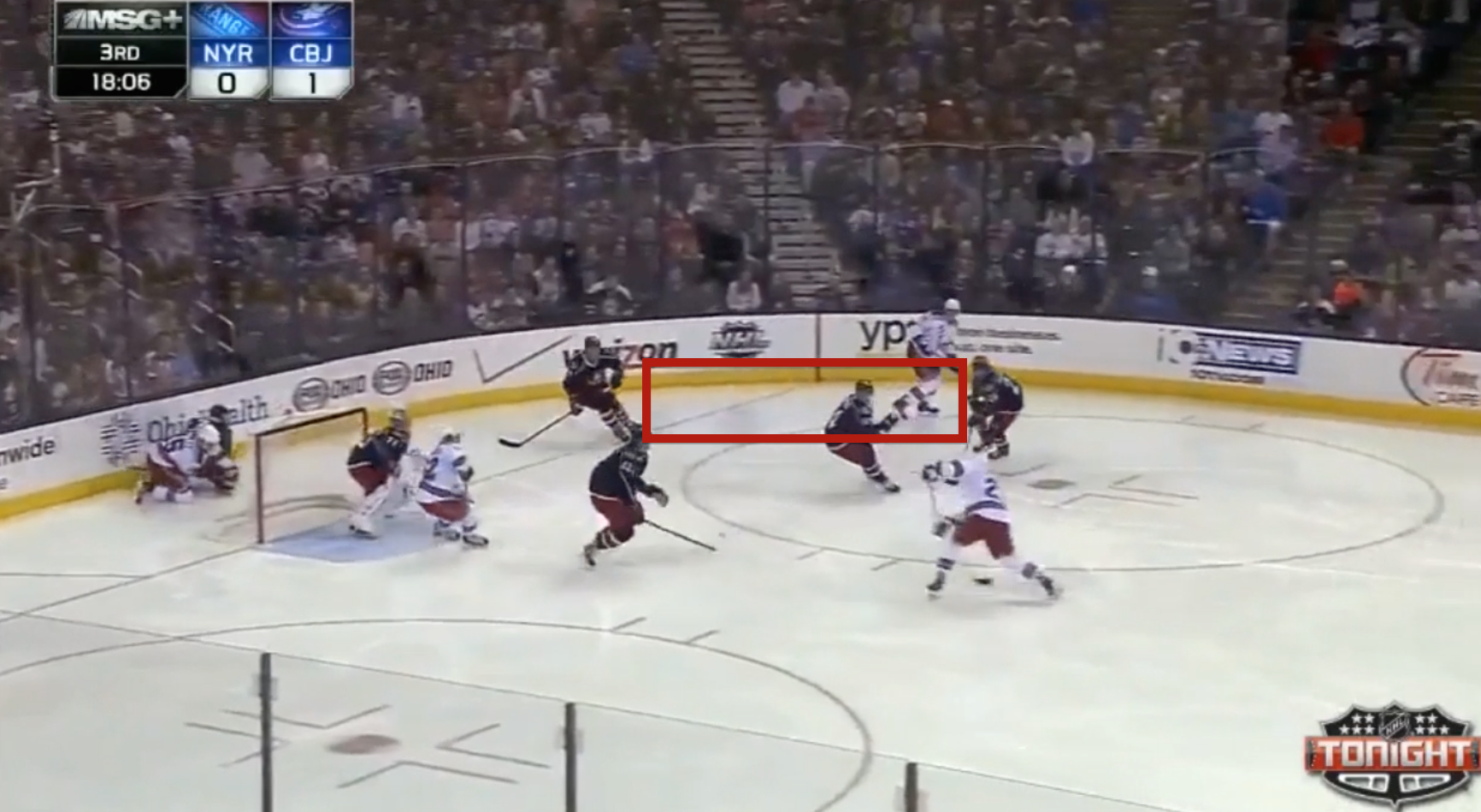