What to expect from the Rangers netminders this year.

The goaltending section of Blueshirt Banter's annual season previews have been pretty easy the past couple of years. Why? Because of Henrik Lundqvist, that's why. Anyway, let's get on to the preview:

There really isn't much to talk about here. Entering his 10th season on Broadway, Lundqvist have been a mainstay since the day he wrestled the starting job away from Kevin Weekes as a rookie. Over the past nine years he has won 309 games, recorded 50 shutouts, and is sporting a cool 2.26 career GAA to go along with a .920 SV%.

I think you can easily argue that Lundqvist is the best goaltender in New York Rangers history regardless of the fact that he has yet to win a ring (which will hopefully be reconciled soon). Either way, Lundqvist has been the pillar behind almost every aspect of Rangers' success since he jumped the pond.

In the least surprising move of the offseason, Lundqvist is slated to be your starter for the upcoming season.

If Lundqvist has been a mainstay since he joined the league in 2005, his counterpart has been anything but. During the John Tortorella years the Rangers went through a phase where they truly leaned on Lundqvist -- to the tune of over 70 games played four years in a row from 2006-2010. As the Rangers made deeper runs in the playoffs, it became clear Lundqvist was being overworked.

Towards the end of Tortorella's tenure with the team, he tried to stay away from having to ride Lundqvist as hard. The experiment failed due to no backups gaining Tortorella's trust, and the Rangers didn't see a true change in the backup department until Alain Vigneault came on board.

Or, maybe that should read "when Cam Talbot came on board." Talbot has been everything the Rangers have lacked between the pipes when Lundqvist is taking a breather on the bench. Last year he played in 21 games -- or maybe more importantly, Lundqvist only played in 63 games -- and sported a ridiculous 1.64 GAA and .941 SV%. You can probably expect both of those stats to regress a little, but Talbot didn't seem like a goalie who was just getting lucky last year.

As we've been speculating since the summer, I fully expect Talbot to play anywhere between 20-27 games this year.

The Rangers' brass made it a point the past two summers to start bringing in potential heirs to the Henrik Lundqvist throne. In 2013 the Rangers drafted Mackenzie Skapski (WHL) in the sixth round. Then in 2014 the Rangers drafted Brandon Halverson (OHL) with their second round pick, and Igor Shesterkin (KHL/MHL) in the fourth round.

Those are the three players to keep an eye on during the year in terms of Rangers prospects between the pipes. Names like Jason Missiaen, David Leneveu and Cedrick Desjardins are all AHL depth who won't make an NHL impact unless the unspeakable happens. And I will not mention what the unspeakable is since it's unspeakable.

One of Lundqvist's strengths in goal is how well he covers the bottom portions of the net. Playing very deep in his crease, the book on him has and continues to be to shoot high. It's really not a well-kept secret, yet Lundqvist has improved his glove and his coverage of the upper portions of the net, making it even tougher to beat him.

Yet though his career, his ability to really take away the bottom areas of the net have made him very effective.

On this sequence against the Penguins, watch how Lundqvist denies Pittsburgh again and again on shots directed at the lower portions of the goal.

As James Neal pops out from behind the net, Lundqvist has the warp-around completely defended. With his stick down, and his shoulders square to the post and the shooter, his posture also won't allow him to get bowled over. 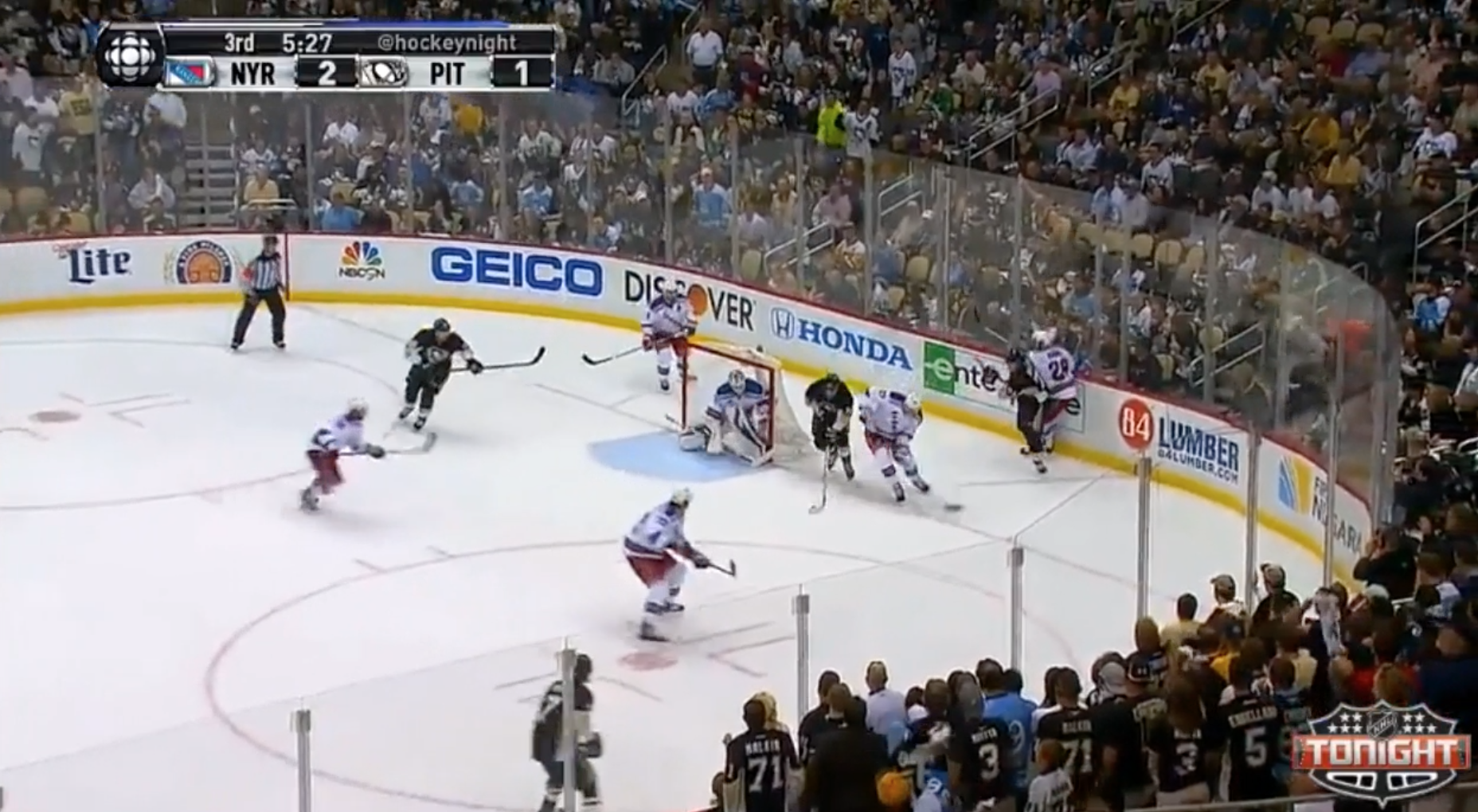 As this sequence continues, there's a scramble at the goal mouth, but look at where Lundqvist is with respect to the goal line. A major component to his discipline in the crease is lower body strength. He doesn't get pushed back into the goal here, and is still in a position to make a play on a subsequent rebound. 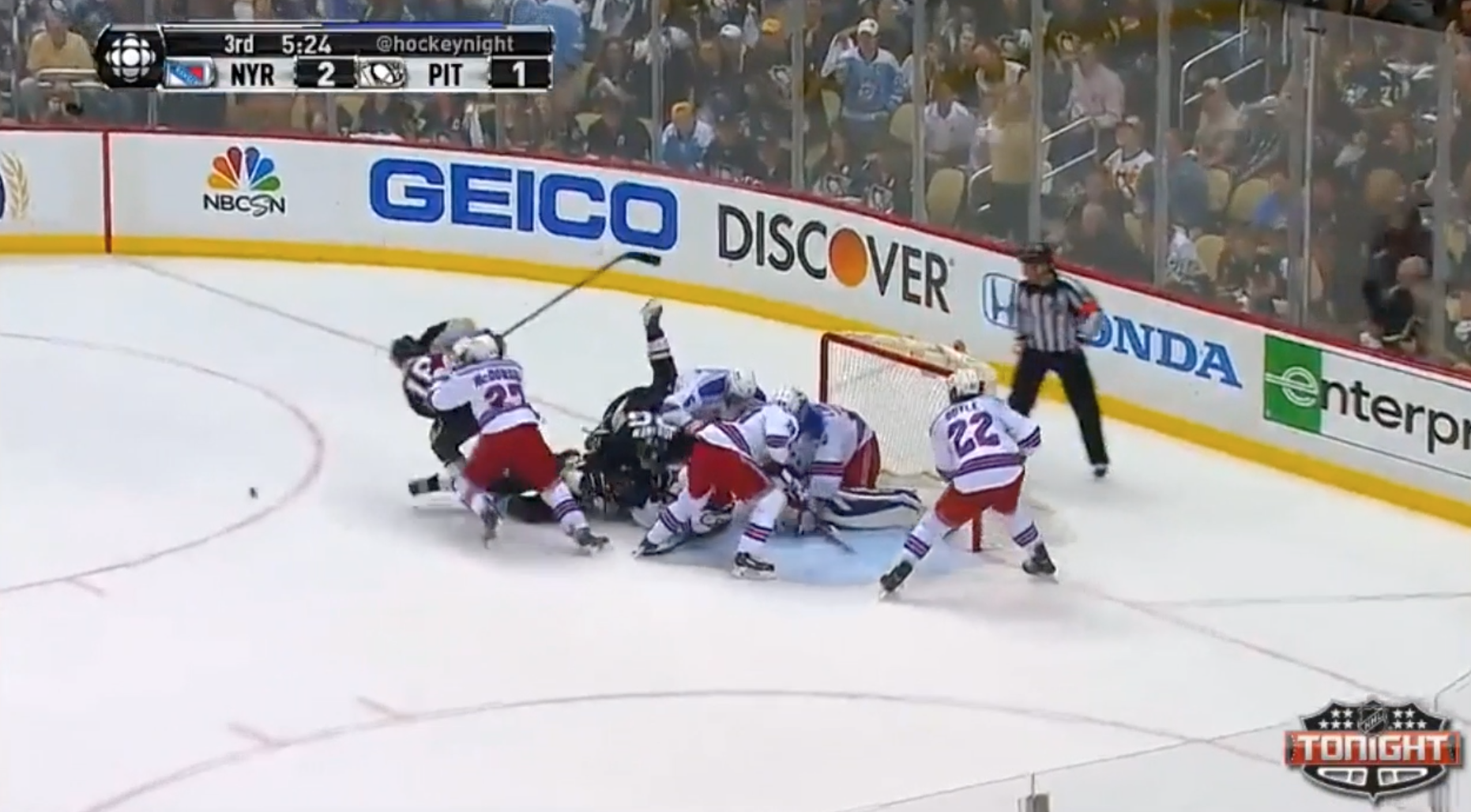 Pittsburgh continues on the attack, but Lundqvist remains in position. His pad level and flexibility completely takes away the bottom portion of the ice. Even if a shot ends up on goal, as long as it's low, it literally has no chance of going in. 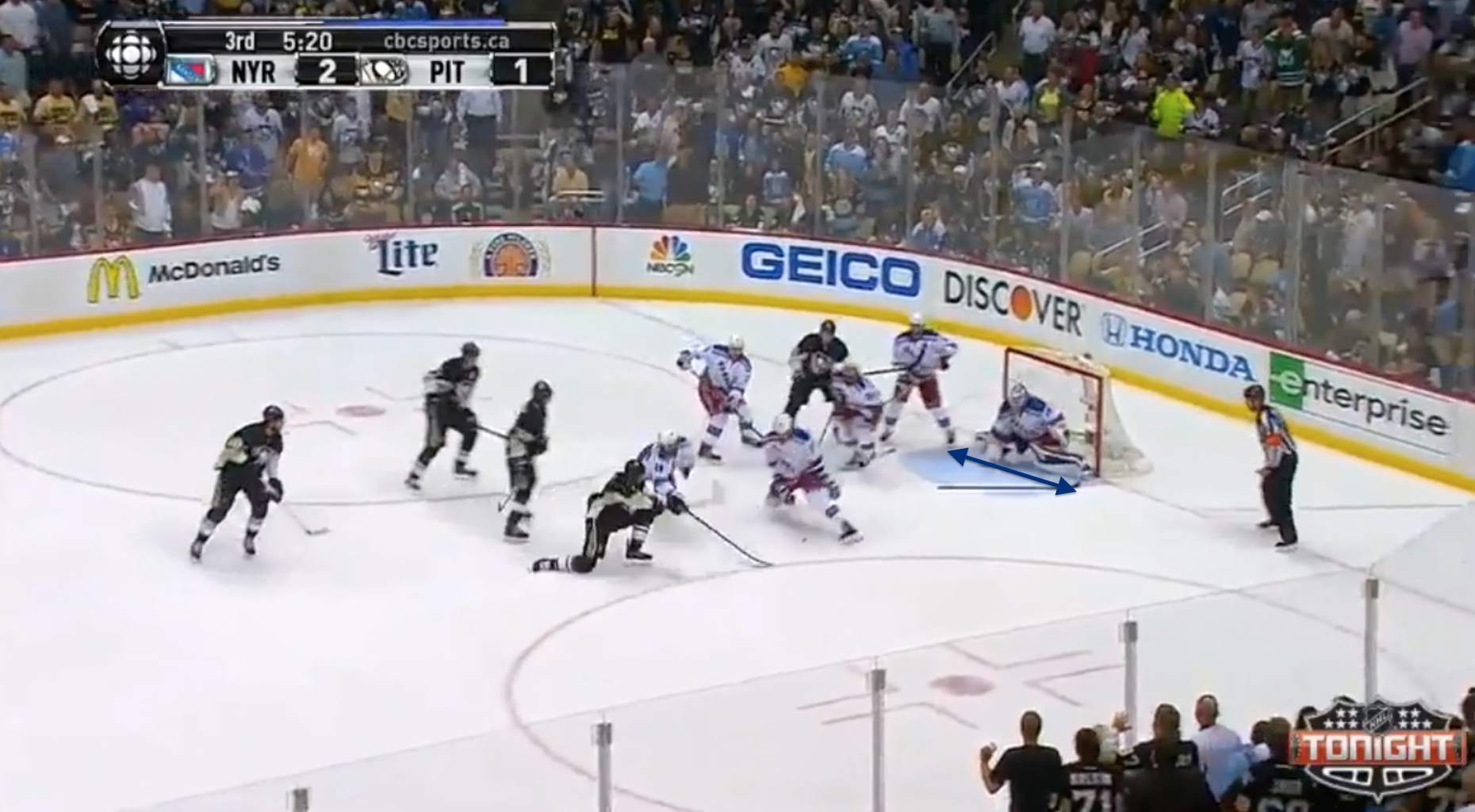 The way this play ends is quite interesting. Lundqvist finally traps the puck, and forces the faceoff. But with traffic in front, and a late whistle, Lundqvist uses his left leg to push off against the back of the goal, and make sure the rest of his body and the puck doesn't cross the goal line. With great core and lower body strength, Lundqvist not only can move quickly laterally in the crease, but also doesn't get bumped off his spots very often. 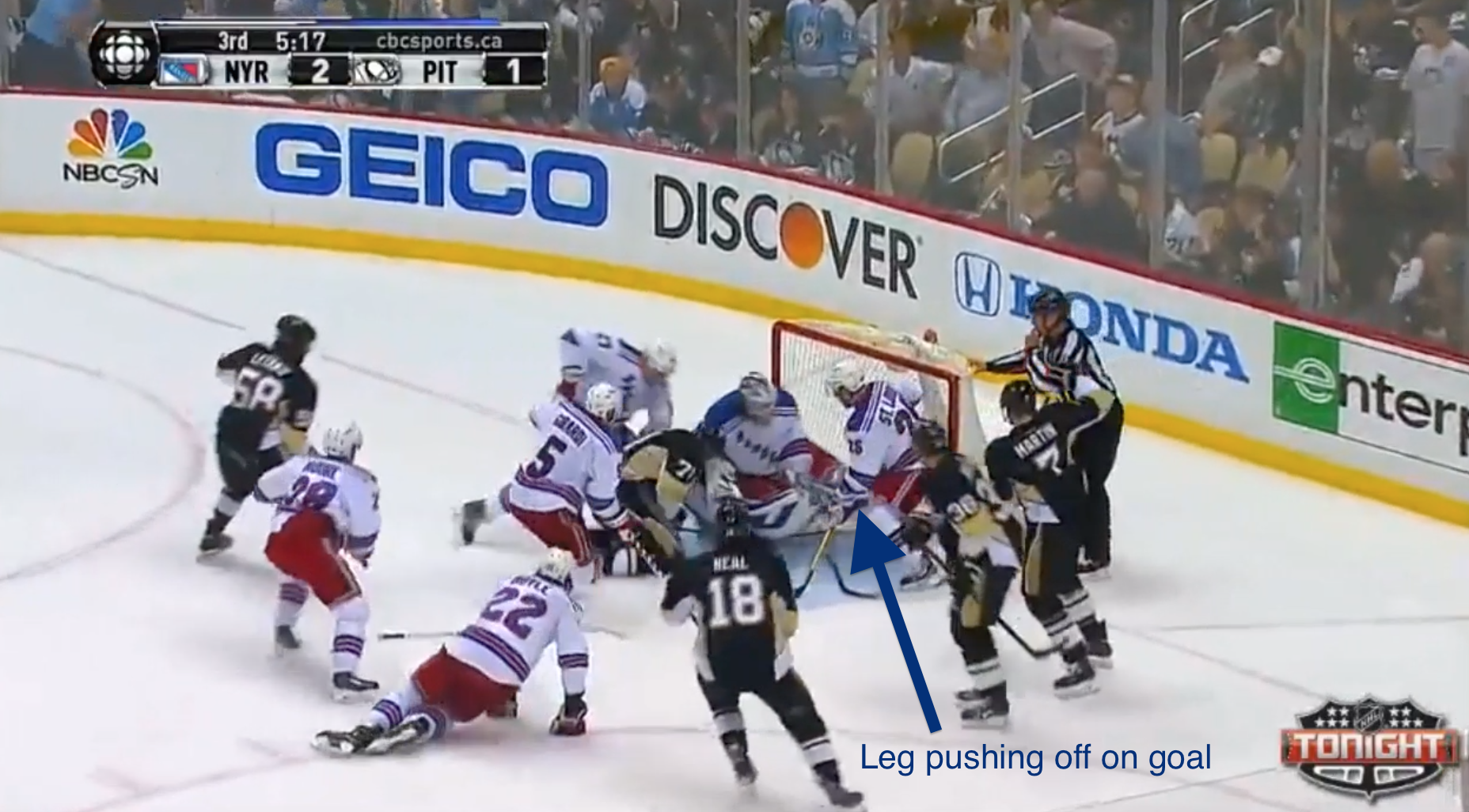